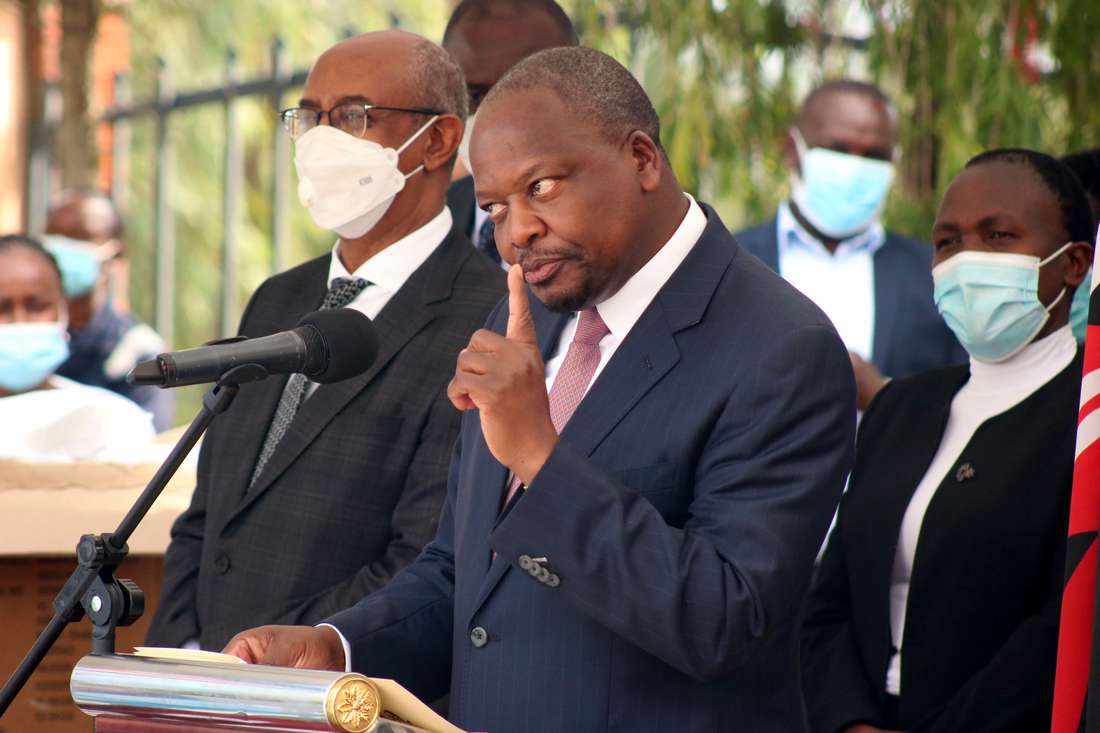 As the noose on corruption continue to tighten in the country and following the directive by the President to look into the alleged Kemsa scandal, new revelations continue to unravel.

After failing to show up to the senate committee of health last week, the suspended  Kenya Medical Supplies Agency (Kemsa) chief executive officer Jonah Manjari appeared before the committee on Friday and dropped a bombshell.

According to the CEO who appears to have decided not to go down alone, he named Health CS Mutahi Kagwe and PS Susan Mochache as having been directly involved in the multibillion-shilling Covid-19 scandal.

Manjari told the committee that the CS and the PS were both following up the procurement of Covid supplies and made calls and texts to him in the effect in what was asserting pressure on him.

The suspended CEO narrated to the senators how the text messages and calls would come – fast and furious – loaded with a lot of pressure directing the medical agency to act in a particular way.

“We received requests from CS Kagwe and PS Mochache mostly through phone calls and SMS to distribute commodities in hotspots. All these things came with pressure,” Mr Manjari told the committee at the Senate chambers.

He also admitted that most procurement of Covid-19-related materials such as PPEs done by the agency around March and April did not follow the correct procedure of tendering due the urgency.

PS Mochache has been accused of directing Kemsa on procurement and firms to award.

Kembi Gitura, the board chairman of the authority which buys drugs for all public health facilities in the country, said Health Principal Secretary Susan Mochache issued the instruction via a letter in April.

“We received a letter from the Ministry of Health containing a list of where we should procure from, the prices and the quantity. I can vouch on the quality of PPEs we procured,” he said when he appeared before the Health committee of National Assembly to shed light on claims of Covid-19 related procurement fraud at Kemsa.

In the letter dated April 15, 2020 addressed to suspended Kemsa CEO Jonah Manjari, the PS claimed that the World Bank had identified and approved various items to be procured by the State agency.

For instance, according to the document tabled by Kemsa, Megascope supplied face masks worth Sh91.3 million while Tikasan and Applied Products were paid Sh4.4 million and Sh417,000 respectively for various items delivered.

The State agency told MPs that it is holding stock of PPEs worth Sh6.2 billion, despite majority of healthcare workers lacking the equipment.

The agency paid Sh700 for the KN95 mask that goes for Sh450 on the higher side. The agency ordered 1.84 million of the items. The prices should be lower considering that the agency is procuring in bulk for many counties. The disposable 3-ply surgical masks were procured at Sh90 per piece against the market price of Sh50 when bought in bulk.

Related Content:  Washington State Loses "Hundreds Of Millions" To Nigerian Unemployment Claims Fraud Scheme
Kenya Insights allows guest blogging, if you want to be published on Kenya’s most authoritative and accurate blog, have an expose, news TIPS, story angles, human interest stories, drop us an email on tips.kenyainsights@gmail.com or via Telegram
Related Topics:
Up Next

DCI Kinoti Has Closed In On A Sh34B Theft