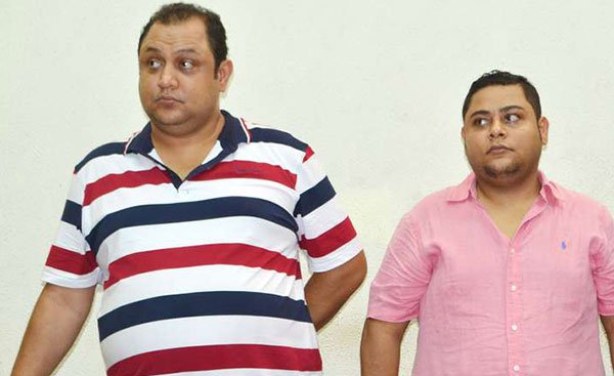 The Kenyan drug barons jailed in the U.S are lonely in prison after being abandoned by family, friends and legal team since their sentencing to over two decades in prison.

Baktash and Ibrahim Akasha were sentenced to 25 years and 23 years in jail respectively by the US courts in 2019.

Since their sentencing, even the Kenyan High Commission in America that is expected to check on the barons who are its citizens has not been able to show love just like Kenyans living in America.

The embassy officials were last seen during court proceedings when they only took notes and filed reports back at home.

But gone are the days when Akashas used to dine with prominent Kenyan legal minds, politicians and senior civil servants whom they bribed to remain at large and frustrate extradition to New York.

The guilty barons who are now serving their lonely and lengthy jail terms in a foreign land have never been visited by any family members, friends, or the corrupt Kenyan officials who fear that US authorities will nab them for being accomplices in their heinous acts.

The two who were drug traffickers and murderers are serving their terms in a country that is worst hit by the Covid-19 pandemic. People catch it and die in crowded prisons.

Baktash is imprisoned in the state of Louisiana where eight prisoners have died from covid-19 while Ibrahim is detained in Brooklyn, New York City, in a facility where five prisoners have succumbed to the virus.

Court records show that Baktash will be freed on May 21,2038 while Ibrahim will come out a little earlier on September 5, 2036 after the two pleaded guilty to a number charges involving drug trafficking.

They pushed narcotics, heroine and methamphetamines into the United States when they led an international drug trafficking ring based in Kenya.

Akashas decried their incarcerations in the US taking issue with Kenyan officials whom they accused of abandoning their sons who used to bribe them.

The drug barons bankrolled many top lawyers in the city together with broke politicians who have all turned out to be betrayers.

Real as it is, no one wants to associate with a drug baron in the day, no one has even seen their traumatized mother too.

But the brothers are specifically bitter with Gulam Hussein, a Pakistan national and Indian Vijaygiri Goswami who had to betray them and become a prosecution witnesses. If anything they pleaded guilty. 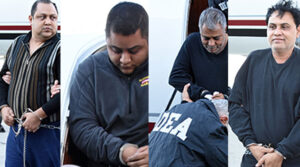 Akasha brothers being cuffed by DEA officials in an old courtesy photo.

The Akashas confessed to the US authorities that they bribed senior officials in Kenya, Tanzania and other countries to peddle drugs across borders without serious scrutiny.

They also named senior officials in the judiciary and many state officials who are part of their drug trafficking empire.

Do the brothers who further admitted that they bought guns and grenades for Somalia based terror group Al Shabaab have the audacity to complain about being abandoned?

The guilty brothers are also claiming that Shanzu man schemed a plot that saw their family conned 5 million shillings.

A fake State House official duped the Akasha family that he could secure the release of their sons from US prisons.

The con they identify as Chris Mwai runs a church at Shanzu near Mtwapa and moves in high-end government vehicles.

Mwai and his accomplices met at his church where Baktash’s wife Najma Juma paid a Sh50,000 down payment to secure her husband’s ‘freedom’ from a US jail.

He lied to Mrs Baktash that he was highly connected to the Kenyan president as he made a fake call.

Mwai would later link Najma to a man she identified as Stephen Nzioka, alias Steve, who assured them that the two brothers would be released on November 28 2018 and arrive in Kenya on December 2, 2018.

She paid the Sh5 million in bits of Sh500,000 to State House Comptroller ‘Kinuthia Mbugua’.

Mwai got Sh1.5 million to have the case out of court but disappeared only to return when he was charged in court.

Kenya Insights allows guest blogging, if you want to be published on Kenya’s most authoritative and accurate blog, have an expose, news, story angles, human interest stories, drop us an email on tips.kenyainsights@gmail.com or via Telegram
Related Topics:Akasha BrothersBaktash AkashaDrug TraffickingIbrahim Akasha
Up Next