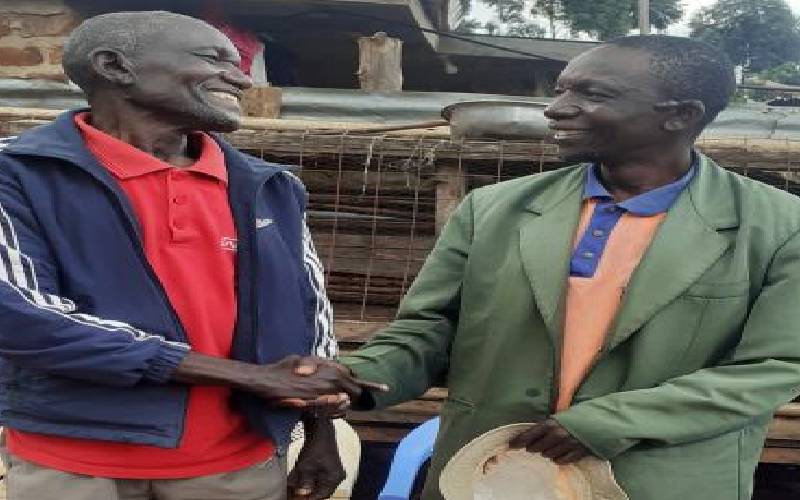 Ezekiel Ayieta, 70, with his younger brother Jackson Ouru. Ayieta returned to their Nyamira home on August 2, after living in Mount Kenya for 45 years. [Stanley Ongwae, Standard]

When Ezekiel Ayieta disappeared from his Nyangoge home in Nyamira at the age of 25, his youngest brother Jackson Ouru was only 3. Now 70, Ayieta decided to return home after 45 years and Ouru couldn’t recognize him at all.

According to The Standard, For the 45 years that Ayieta lived in Central Kenya, he never communicated with his family. His parents and kin had long forgotten about him.

He had officially earned himself the title of Omonyamwaka, a label for men who went away and forgot about their families. Men whose whereabouts are not well known.

Ayieta, together with five other young men embarked on a journey to explore Mount Kenya forest for timber business. However, things didn’t go as planned.The other four are now dead and only he can tell their stories.

It was until last week that Ayieta returned to his village that he had run away from. Apparently, coronavirus pushed him back home, the thought of dying fat from home gave him enough disturbance. Sick and hungry, he made his way home.

Only his nephew, Bishop Changamu, could identify him. Many others took off on seeing him, believing he was a ghost.

He’s now reunited with his native family and expected to be built a house on his inherited village land.

Kenya Insights allows guest blogging, if you want to be published on Kenya’s most authoritative and accurate blog, have an expose, news, story angles, human interest stories, drop us an email on tips.kenyainsights@gmail.com or via Telegram
Related Content:  First Kenyan Movie Set To Air On Netflix
Related Topics:
Up Next

Meet Man Who Has Gone Almost 80 Years Without Shaving, Combing Or Washing His Hair