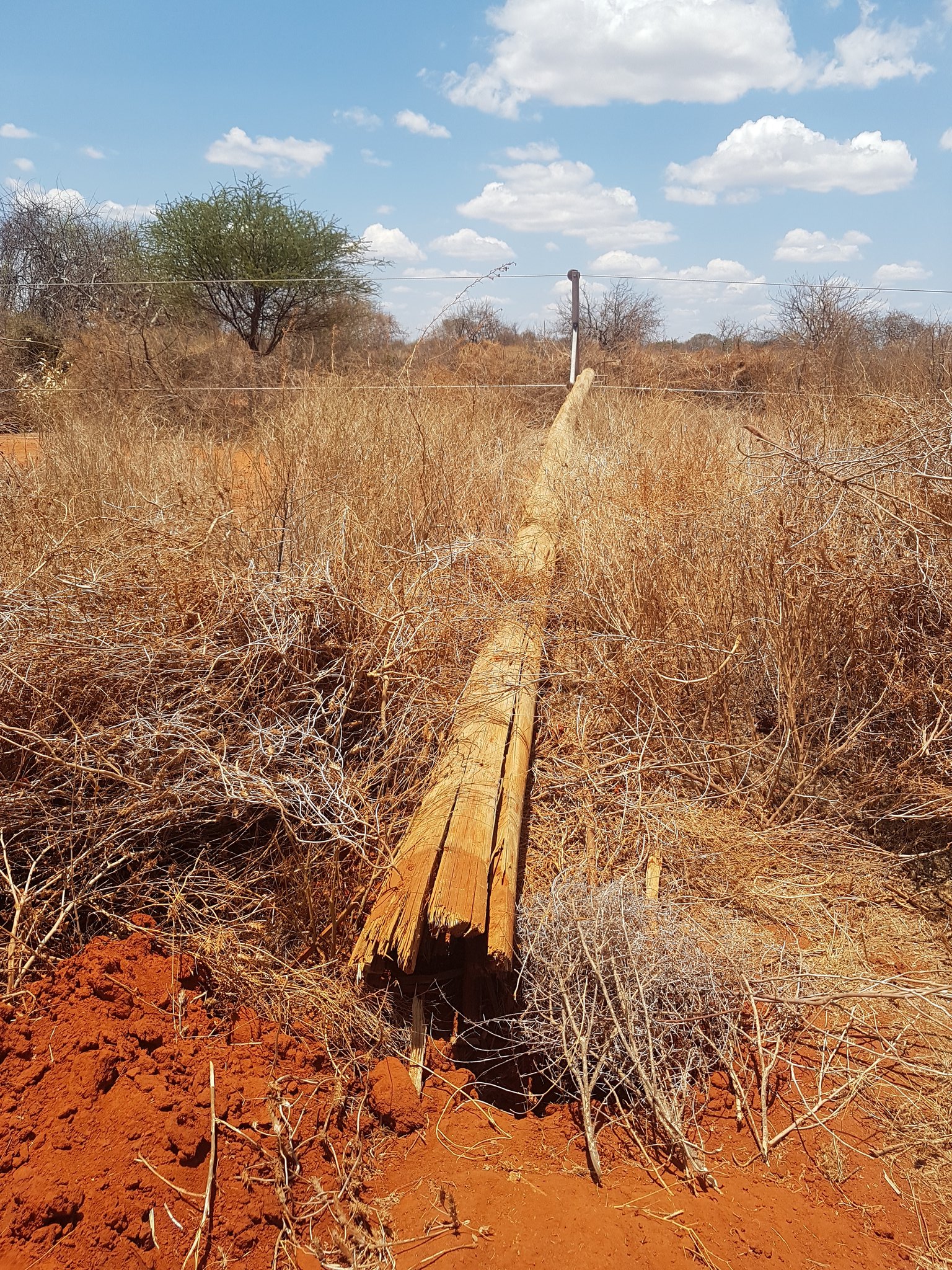 A substandard pole falls off.

A case that has been catching dust in different investigative agencies has been awaken by the Auditor General’s report of 2020/21 bringing to life how the executives of Rural Electrification and Renewable Energy Corporation’s (REREC’s) were engaged in a procurement scam that saw the agency pay rogue contractors Sh800M for supplying substandard electricity poles.

The scandal was first brought to light in 2019 but ever since, cat and mouse games have ensued and no action has ever been taken against those involved in what is believed to be an insider fraud scheme.

When procurement irregularities were cited, the Rural Electrification and Renewable Energy Corporation (Rerec) rushed to return 51,238 substandard wooden poles to the suppliers for re-treatment and they were speedily used in electricity projects.

The suppliers then pocketed Sh800 million, and those investigated and found guilty received a slap on the wrist.

This was revealed by the Competition Authority of Kenya (CAK), which said that of the 18 companies Rerec awarded the tenders in 2019, five that were investigated were controlled by the same directors and submitted similar bids, raising the cost of the supplied products.

“The authority conducted investigations to determine if the players in the supply of electric poles could have been engaging in bid rigging practices prohibited under Section 21 of the Act,” the CAK report says.

“The authority secured and analysed tender documents from Rerec and made a finding that the firms had indeed engaged in collusive tendering. Specifically, the companies presented tender documents bearing identical price schedules and similar prices.

CAK initiated investigations of collusive tendering irregularities by participating firms in the tenders for Rural Electrification and Renewable Energy Corporation, with regard to procurement of concrete and treated-wooden electricity poles.

The firms reached a settlement deal and were fined Sh1,305,355. CAK added that investigations on a sixth company – Naweza Investment Ltd – were still going on.

The companies opted to pay a fine rather than go through the investigations.

ITTL told CAK that Rerec had been unlawfully terminating contracts and awarding tenders automatically to some companies and that there were cases of cross directorship in different companies participating in the same tender.

Background of the fraud

The exact amount is uncertain but estimates put it at Sh1B lost in the substandard poles scandal.

The looting involved a cartel of top managers at the state corporation in collaboration with a long list of companies that supplied the substandard electricity poles.

Emerging details show that the authorization of the payments was cleared by the REREC Chief Executive Officer (CEO) Peter Mbugua who ordered the chief finance manager accounting Davis Cheruiyot who was at the time on leave to come back on duty to execute the payment transitions.

They also show that the poles were supplied by a horst of companies to its depots in various parts of the country where inspections were conducted by the REREC team led by Mr Philemon Langat and witnessed by at least six witnesses from the corporation.

The inspection and testing of the poles failed to meet the REREC standard requirements. The inspections were conducted in April of 2019 and the payments effected at the end of the same year. 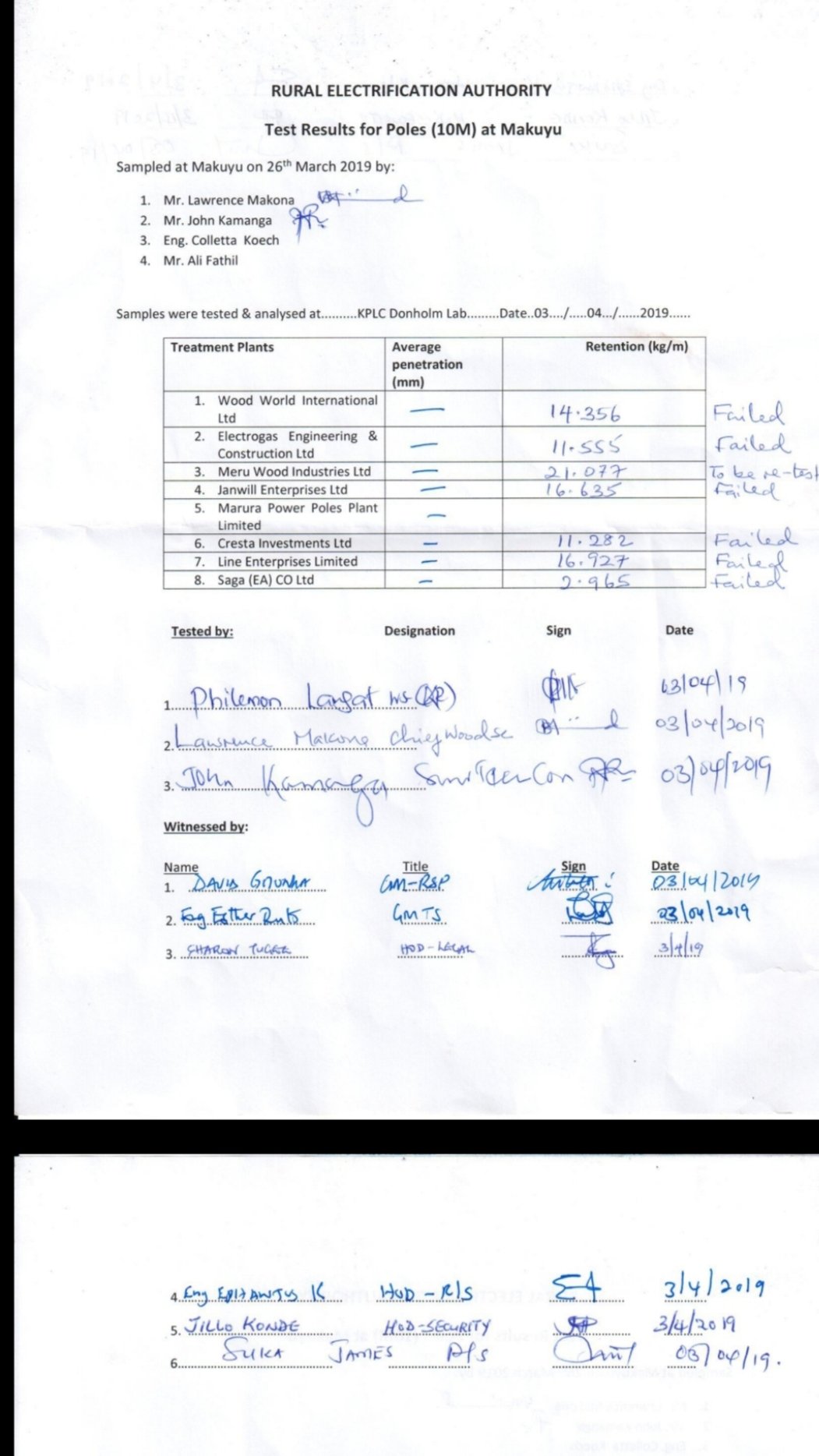 One of the documents from the inspection.

The documents show that the testing was done in Kisumu’s Awasi area, Mariakani in Mombasa, Makuyu in Central Kenya among others as part of the government’s ongoing going Rural Electrification Programme initiated by the President Uhuru Kenyatta administration.

In challenging the award of the tender to the firms, aggrieved Intertropical Timber Ltd’s director Geoffrey Kariuki pointed out the corruption and impunity at the agency while pointing fingers at the REREC CEO Peter Mbugua and its Chairman Simon Gicharu for loss of pubic funds, procurement of substandard goods and serious conflict of interest and theft of exhibit at REREC stores among other.

Kariuki filed a petition Petition No 165 of 2019 to highlight the scandal this was after writing numerous letters to the investigative agencies; DCI, EACC and ODPP. 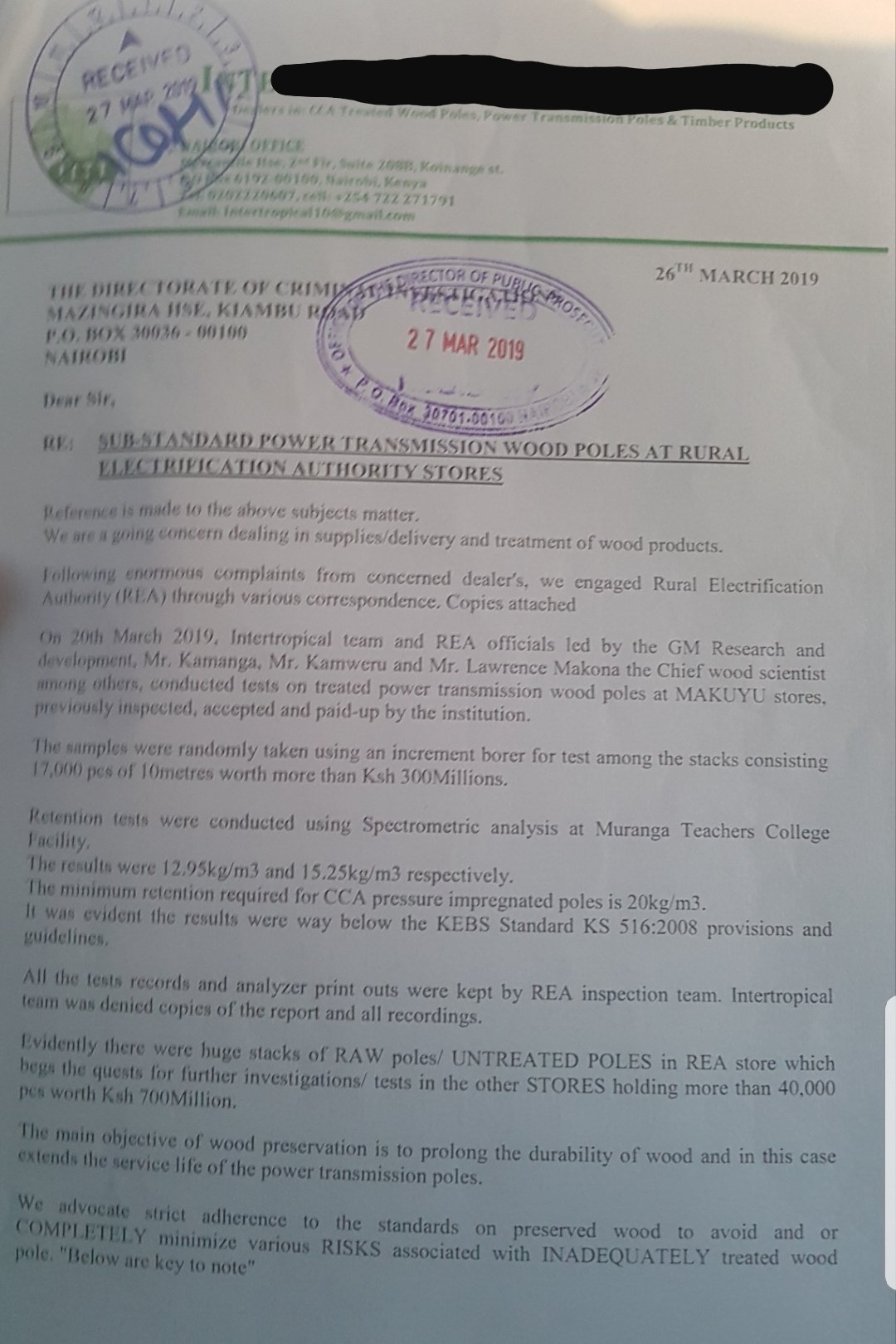 Letter to the DCI. 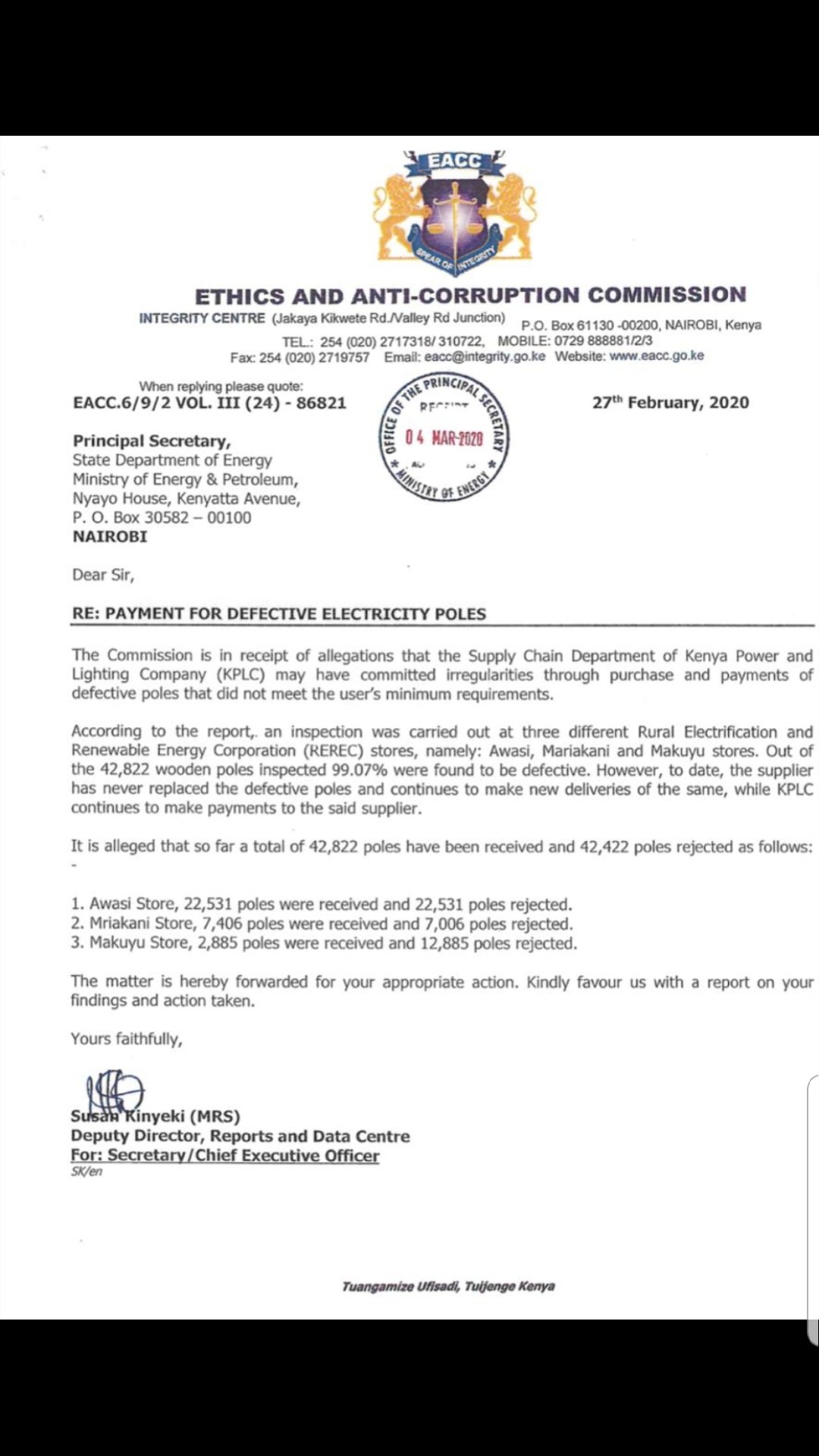 Inter Tropical wrote to Kenya Bureau of Standard (Kebs) complaining that the life-span of power poles had suddenly dropped from 30-40 years to less than 5 years. The complaint caught the eye of Energy Principal Secretary Joseph Njoroge and the CS who ordered a probe to ascertain the claims.

A few days earlier, energy CS Mr Keter had, in a handwritten note asked REA to “confirm and urgently get me a quick response and if true those involved must face the law.”

A report by REA(now REREC) for the CS on the claims and dated March 5, lifted the lid on the operations of REA with regard to acceptance or rejection of poles on the basis of treatment. For instance, of all the 7,649 ten metre poles received in Mariakani’s REA stores since July 1, 2018, none had been rejected.

“Poles that do not meet the minimum requirements are rejected and set aside for the affected suppliers to collect within fifteen days. The suppliers whose poles fail the inspection are immediately notified of the inspection outcome,” Mbugua said in the report sent to CS, PS and the complainant.

What started as a mere complaint from one supplier – Inter Tropical Timber Ltd- to Energy Cabinet Secretary Charles Keter, morphed into a court order by Justice J A Makau stopping Rural Electrification Authority (REA) from interfering with the 51,238 substandard poles. 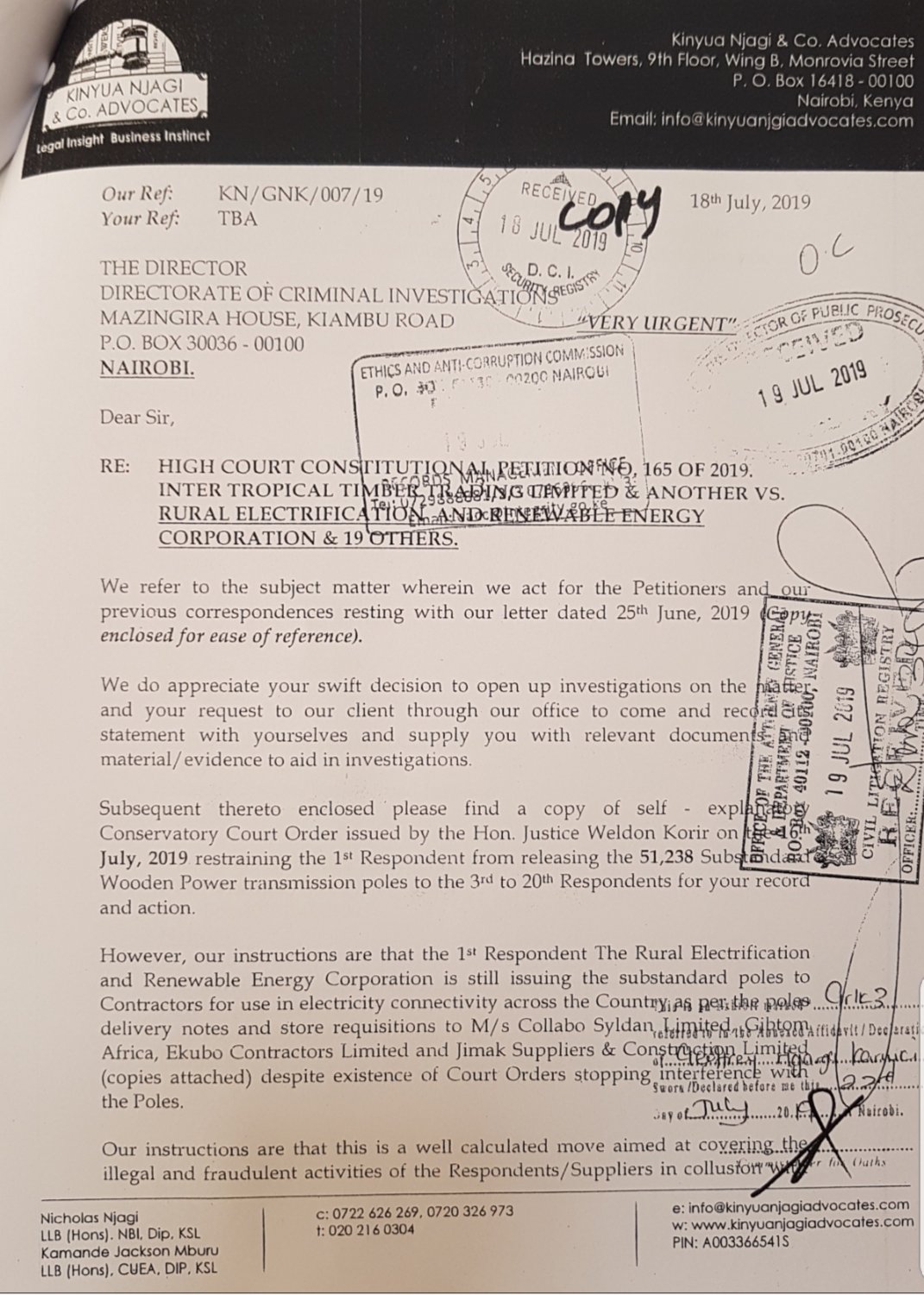 The law firm of Kinyua Njagi & Company Advocates wrote to DCI alerting them of the preservation orders granted by the courts and seeking an update on an earlier complaint in March on the same matter. 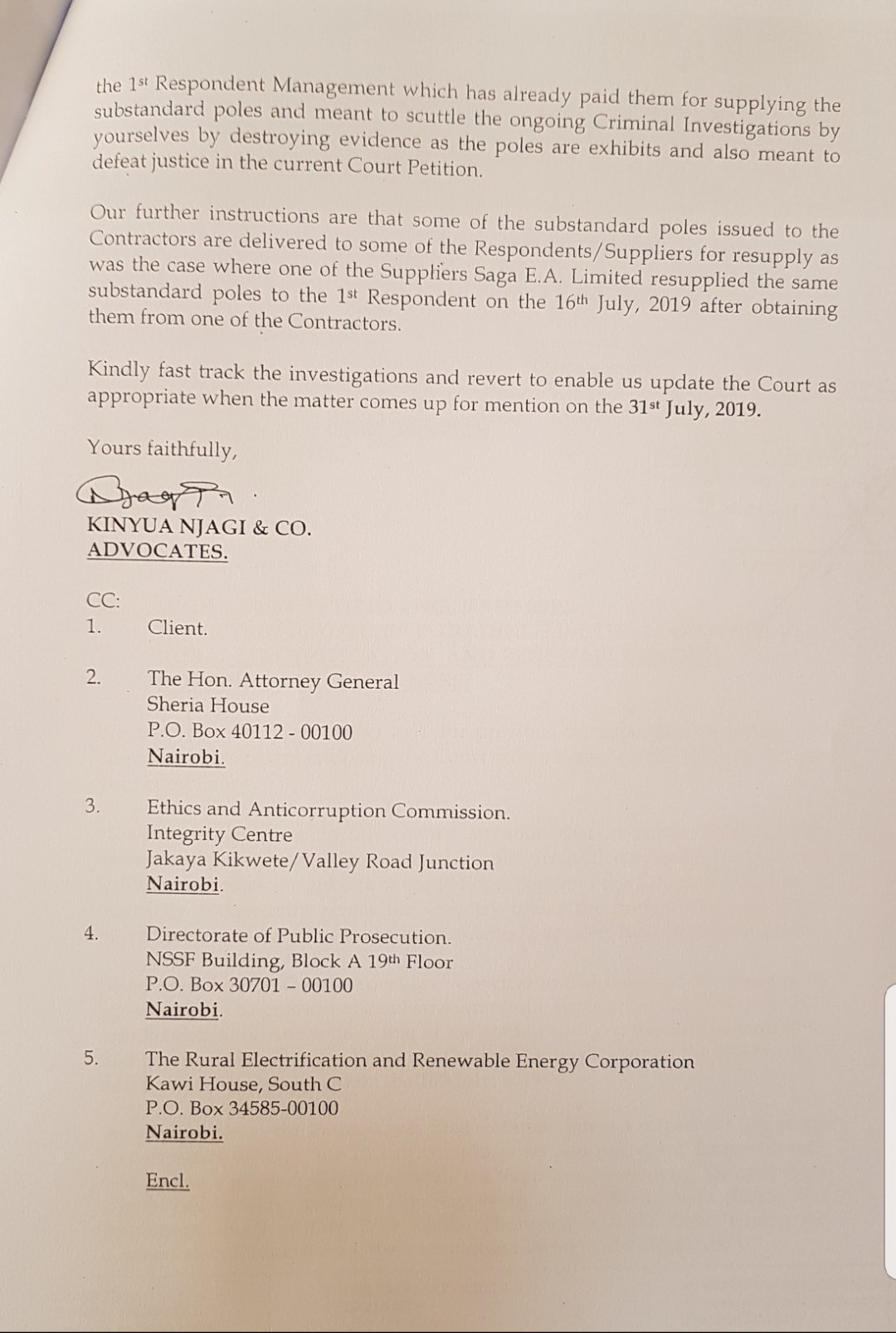 The company accused Rerec in court of having colluded with the suppliers to supply substandard products and defrauding the public. The particular tender was No. REA/2017–2018/NT/021.

Disputes over the tenders ensued in court in 2019, with several court orders issued and some blocking Rerec from releasing the substandard poles, while another allowed it to return them to suppliers for retreatments.

In May this year, the High Court sounded doom for the Sh1 billion project that was to benefit thousands of rural households when it upheld Rerec’s argument that the court had no jurisdiction to decide on the matter.

“I find the proper forum where Petitioners should have proceeded to ventilate any alleged contravention of the provisions of the Act arising from the procurement process, award and performance of contracts thereto vests with the Authority and or the Review Board, as the Petitioners may elect but not before this Honourable Court, as at the time of filing the Petition,” Justice James Makau ruled on May 27.

Despite being named in the scandal, the firms continue to do business and awarded tenders by the parastatal.

It is not the first time Rerec’s procurement processes have come under scrutiny since 2018/19. The Auditor-General also questioned the authority’s decision to buy transformers for Sh54 million from a Tanzanian firm through direct procurement.

The Auditor-General said the procurement was not “an emergency in nature but arose from inadequate planning on the part of management”.

CS Mwangi Kiunjuri was also linked to the supply of substandard transformers at REA/KPLC in 2015-16 and investigations led by DCI, EACC didn’t help much and the matter was buried.

Another scandal appears to be looming according to the alarm raised by insider source speaking to Kenya Insights, REREC is involved in a speculative procurement as below quoted on secretive tender whose bidding is now closed: “Supply of 10m composite poles –open to local manufacturers only. Within Seven (7) Months after Contract signing,” said the tender document.

Apparently this tender is tailor-made for a company that is non-existent on the ground called KKN. Huge connection to KEMSA. A cabinet paper was passed by PS Energy to approve the use of composite and KPLC, as well as Rural Electrification and Renewable Energy Corporation (Rerec), were forced to procure 60,000 poles at 60,000 but with bulk order to be reduced to Sh55,000 per pole. This is thrice the price of concrete poles.

Kenya Power & Lighting Company Plc (KPLC) MD refused to procure initially  and thus tender was channelled through Rerec, by CEO and Chairman both from Mount Kenya. Specifications and of the eco pole.

Technology has not been proven anywhere and is 3 times the price of concrete poles.

The tender document specifications are as Ecopoles brochure, and the standard is for poles being dropped from a forklift at 3 metres high, which is a farce considering that there is no such test in the world. The product doesn’t conform to any International Standard for Composites and has never been used anywhere in the world, though it is marketed as Norwegian and United Nations (UN) etc.

There are local manufacturers who have set up a plant for real composite products but they have been sidelined by the tender document which has covered sizes, strengths and designs of Ecopole.

Ecopole is a rudimentary technology never proven anywhere with false claims of UN goals etc and no certification of such approvals. Furthermore, it states that it is fully recyclable but it is foam filled which isn’t recyclable anywhere in the world. Basically, a waterpipe stuffed with bamboo twigs and filled with foam. The rush to have 15,000 in 7 months since announcement rose curiosity on the urgency since REREC doesn’t hold the capacity to install that huge number of poles in a short time. Perhaps someone in a rush to get a cut off of the tender?

Based on the investigation and current available
evidence, there’s reasonable cause to believe a crime was committed by REREC management. There exists demonstrable grounds for believing that a grave social evil is being allowed to flourish
unchecked at REREC.

If the culprits are not prosecuted at this point in time there is likelihood of failer in Public and private justice in future. The Investigative agencies/Public prosecutors seized of the complaints has declined to intitute criminal
proceedings against REREC management.

The refusal by state agencies to prosecute is without reasonable cause and no good reason as to why the prosecution should not be undertaken.
In the current circumstances, prosecution of REREC management by the OPP is highly unlikely to be exercised.

Based on the forgoing; There should be a leave of court to institute private criminal prosecution against REREC management and
board of directors if the public is to get accountability and lost money. 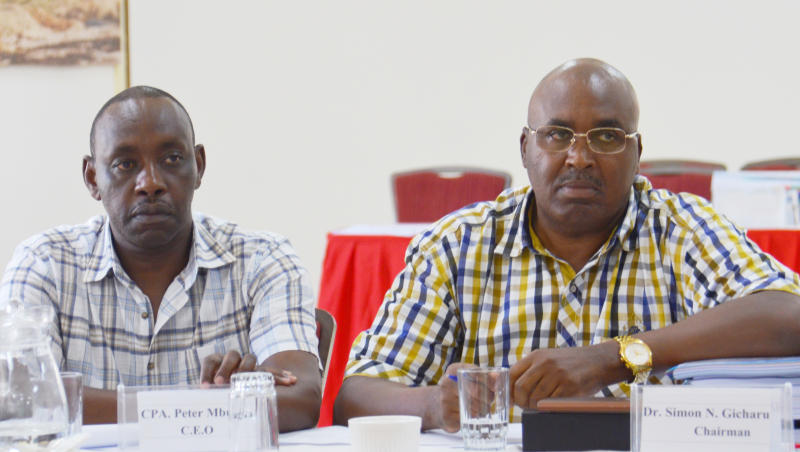 It has been noted in other government institutions where officers engage in large scale corruption and pocketing millions in bribery as tender kickbacks.

Picking the case of Sh800M substandard poles, a multiagency probe more so in the procurement department of REREC would give a money trail and point at suspects who’re likely benefiting from kickbacks. A lifestyle audit would come out with shocking details. Our inside source insists’l it would be shocking’.

At the end of the day, REREC is answerable to Kenyans and donors who pump billions to various projects in the counter. The back stops with CEO Mbugua and Chairman Gicharu, you can revert to a corner, converse in local dialect and come up with answers to the endless questions.

Kenya Insights allows guest blogging, if you want to be published on Kenya’s most authoritative and accurate blog, have an expose, news TIPS, story angles, human interest stories, drop us an email on [email protected] or via Telegram
Related Topics:CEO Peter MbuguaKPLCRERECSimon Gicharu
Up Next

Bandari Sacco On The Spot Over Misappropriation Of Funds

Chatur Group Of Companies On The Spot Over Illegal Activities