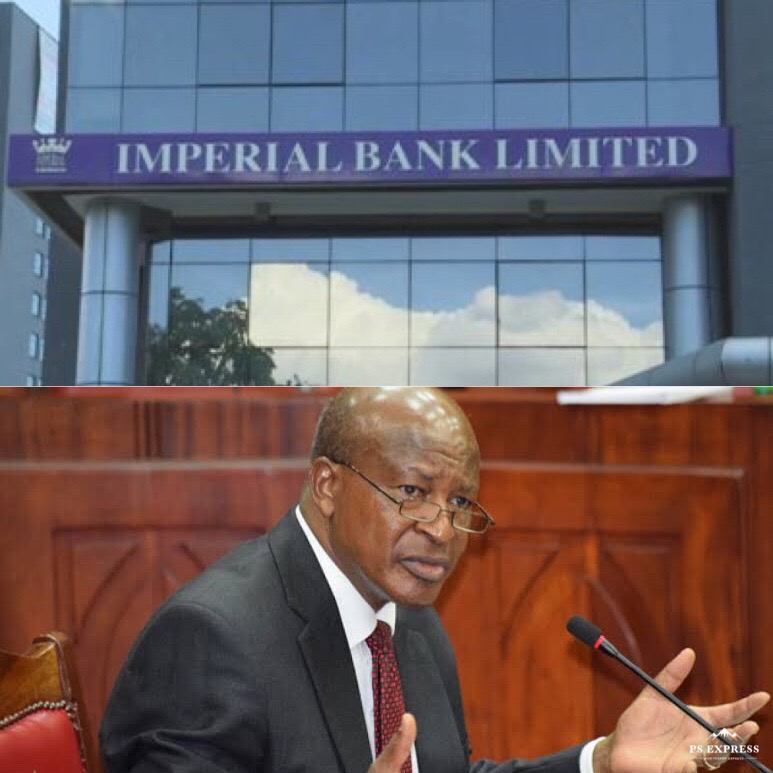 After 6 years since the launch of investigations, no single prosecution nor conviction made and when promising findings are made, AG Paul Kihara Kariuki Contravenes to protect the sacred cows from being publicised. AG has clearely contravened the independence of the CBK as articulated in Article 231-3 which states, “The Central Bank of Kenya shall not be under the direction or control of any person or authority in the exercise of its powers or in the performance of its functions.”

Its a game of cards; personal interests at the expense of constitutionalism.

The Attorney-General blocked the Central Bank of Kenya (CBK) from revealing or tabling in Parliament findings of a forensic audit on the collapse of Imperial Bank. CBK governor Patrick Njoroge and Treasury Cabinet secretary Ukur Yatani said the State could not share findings or summaries of the report with the National Assembly as required under Article 125 of the Constitution. Dr Njoroge said there are several cases related to the forensic audit that are before the courts and further work by investigating agencies was progressing.

“The Attorney-General advised that, in the circumstances, sharing at this stage the findings and summaries of the forensic audit would undermine investigations and prejudice successful prosecution and defence of the ongoing cases. The overriding objective is to guard against prejudicing the course of investigations,” he said.

Imperial Bank directors were accused of failing to co-operate with the CBK on the reopening of the bank through their refusal to deposit Sh10 billion as the first step to reviving the lender.

The CBK then went ahead in 2016 and hired FTI, a specialised forensic accounting consultancy, to Imperial Bank books and assist CBK and KDIC to institute criminal and civil proceedings against those responsible for the collapse of the bank.

“Given the significance of these cases with respect to the financial sector and also the legal system, and the strong desire not to jeopardise their fair and prompt conclusion, CBK sees considerable risk,” Dr Njoroge said told the Finance Committee.

He did not disclose the amount paid to FTI after Alego Usonga MP Samuel Atandi demanded to know why CBK still pays the auditor. He said CBK does not pay FTIs fees.

“This FTI consulting is still in CBK payroll and receiving billions of shillings from 2015. The governor is hiding something. Tell us how much money is this company being paid monthly or has been paid,” said Mr Atandi.

The Washington DC-based firm was first called in by besieged Imperial Bank directors to look into allegations of massive fraud at the lender following the demise of long-serving Managing Director Abdulmalek Janmohamed.

A preliminary forensic audit by FTI Consulting revealed that Mr Janmohamed could have discreetly siphoned out Sh39 billion from Imperial Bank between 2002 to September 15, 2015 when he died — and wired the cash to his companies and bank accounts.

It was on the basis of FTI Consulting’s primary report that CBK decided to close down the bank on October 13, 2015 and broaden the firm’s mandate to carry out a comprehensive forensic audit into the lender.

In 2020, FTI’s findings traced Sh3.4 billion in eight bank accounts linked to former Imperial Bank managing director Abdulmalek Janmohamed who was accused of being behind an elaborate fraud scheme that robbed the lender of Sh34 billion over a period of 13 years.

The Kenya Deposit Insurance Corporation (KDIC) told the court that the accounts were opened using fictitious names under the direction of Mr Janmohamed, who died in September 2015—just a month before the lender was placed under receivership.

Court documents showed that the late Janmohamed and his associates used 12 companies to open accounts at Imperial Bank into which they deposited massive amounts that were then moved out of the bank before they were immediately closed.

The transfers were made by a section of the bank’s top managers, including current managing director Naeem Shah and his deputy, James Kaburu. The duo would then manipulate software systems at the bank to ensure the dummy accounts disappeared from the records.

“The bank claims jointly and severally against the deceased estate and the 2nd, 5th and 6th defendants the sum of Sh3.4 billion which amount was illegally and fraudulently received in trust from the SB accounts, which accounts is made up as follows,” says KDIC in court documents.

Court documents did not reveal the banks hosting the eight accounts, which have nearly 10 percent of the cash believed to have been siphoned from Imperial Bank. Proceeds of the fraud were mainly invested in real estate properties, offering fresh insights into the role that corruption and crime plays in driving Kenya’s housing market.

Mr Janmohamed left a vast estate, including prime real estate properties, shares in blue chip companies and loads of cash in various banks. The suit has also revealed a gigantic empire that Janmohamed left behind, which includes a five percent stake in Butali Sugar Mills and another five percent of Imperial Bank.

Other prominent companies he had a stake in are Old Mutual and Apex Securities. He also had shares in Sandview Properties, Allgate Limited, Serenity Limited, Plymouth Holdings, Upperview Properties, Downtown Holdings and Nature Stone Queries.

One of his companies, City Park Properties, owns office premises that rake in a total of Sh447,000 monthly. The Imperial Bank founder’s cash was saved in four bank accounts, one each at I&M Bank and National Bank of Kenya, and two at Standard Chartered Bank.

The Standard Chartered accounts were in foreign currency. Mr Shah and Mr Kaburu, despite revealing the scam to the Central Bank of Kenya (CBK), had not been spared as they were among the respondents in the suit. They admitted to making the illegal transfers but claim they did it on instructions from Mr Janmohammed.

The final FTI report seems explicit and has linked big fish that AG is out to protect by all means.

Kenya Insights allows guest blogging, if you want to be published on Kenya’s most authoritative and accurate blog, have an expose, news TIPS, story angles, human interest stories, drop us an email on tips.kenyainsights@gmail.com or via Telegram
Related Topics:Attorney GeneralCBKImperial Bank
Up Next