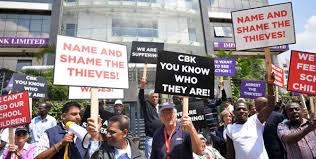 On October 13, 2015 a major bank in Kenya closed its doors without notice, due to the unnecessary instructions from the Deputy Governor of the Central Bank of Kenya (CBK) by placing the bank under receivership and put in the administration of Kenya Deposit Insurance Corporation (KDIC), claiming the bank was trading inappropriately.

Imperial Bank Ltd (IBL) had all funds in the bank frozen leaving depositors without any access to their funds. Now 12 months later only a small amount of funds have been released to the small depositors leaving retirees, people in business and investors with no means of support.

The Imperial Bank Directors brought in a UK company to carry out a forensic investigation report; however, CBK has not made the report public!

The only information the depositors have received is from leaks within CBK to newspapers indicating bribery and corruption to the highest levels in the CBK in which it is reported key top officials in CBK were bribed to place IBL into receivership and ensure liquidation of the bank so as to hide the scandal of unsecured loans not serviced for years by IBL directors, CBK auditors & WE Tilley.

The depositors have now embarked on a campaign petitioning the President of Kenya and the Governor of the Central Bank of Kenya, requesting that they intervene in helping in the arrest of all the corrupt individuals involved in the fraud of the funds from Imperial Bank depositors including those in their own departments, the release of the forensic report, transparency of financial events and records since the bank closed its doors PLUS the full payment of the funds to the Imperial bank depositors making good, this shocking breach of investors’ confidence.

The Authorities need to take into consideration the Miserable Plight of the Imperial Bank Depositors who have been reduced the “Status of Ultra Poverty “…with Every Passing Day Ushers in Despondency & Degradation in Our Vicious Society Where those who Commit Crimes Whether they be Economic Saboteurs or Using Brutal Force, both Using their Criminal Brains to Defraud & Fleece the Common Citizens of the Country with Ease ….as they are the “Untouchables” Freely Bribing their Way through the Echelons Of The Law.

When is this all Going to Stop?

Is there No Justice at all In Modern Day Kenya? Why are the Criminals Roaming Freely with Impunity…..Who are the God Fathers Offering them Sanctuary & Safe Haven to Further Indulge in their Immoral & Unethical Behaviour?

HUMBLE & PASSIONATE APPEAL TO ALL THE COMMUNITY LEADER’S WHERE THESE MAFIAS & GOONS HAIL FROM. …TO STOP GIVING THEM UNDUE ATTENTION & PRIORITY & PLATFORM TO FURTHER SUBJUGATE THE COMMUNITY MEMBERS AS IF NOTHING HAS HAPPENED.

Kenya Insights as part of of our social good responsibility, enjoins the depositors in pursuit for justice which will result in getting back their money.

Kenya Insights allows guest blogging, if you want to be published on Kenya’s most authoritative and accurate blog, have an expose, news TIPS, story angles, human interest stories, drop us an email on [email protected] or via Telegram
Related Content:  Kenya Launches Virtual Safari Tour Program For International Tourists
Related Topics:BankingBusinessDevelopmentImperial BankInvestigations
Up Next