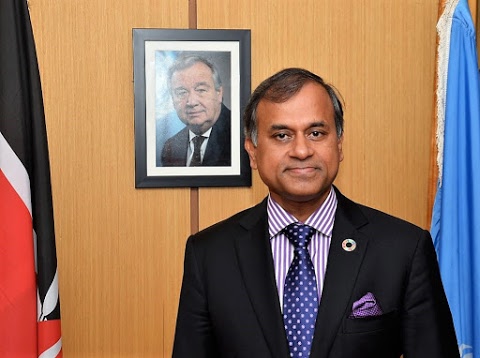 A job with the UN remains one of the prestigious opportunities many people look up to but humanitarian work is not a walk in the sandy beaches as Sid would later come to learn in life. The oomph and the glamour that the organization beams is just a painting but not really what’s inside. As for Siddharth whose name I keep bitting my lips struggling to pronounce and the UN Resident Coordinator in Kenya, the math is more complicated. He’s the face of UN in Kenya, the backstops with him. As the head, he gets the balloons and stones which puts him in a position that only those fitted with crocodile skin can survive through.

Recently, UN Social 500, an in-house indexing platform ranked Sid at number 5 globally amongst UN employees globally actively using social media to champion for social good. This brings me to the main point of this article. Kenya is just coming from a lengthened period of ruthless politics that did not only end in election nullification, injuries and loss of lives but the reputation and characters of many people were left bruised as collateral damage in a highly ethnic country.

Kenya is exceptionally polarized with a sizeable tolerance to dissenting opinions, it is this factor that voting is predominantly tuned along tribal divisions. On the 8th of August, the general election was held but the presidential election that gave Uhuru Kenyatta the upper hand would later be nullified by the supreme court on the 1st of September and a fresh election would later happen in three months.

During this period, the international community including the envoys, observers, and organizations such as UN came under fierce criticism especially from the opposition NASA coalition accusing them of conspiring to rig in and endorse a fraudulent election of Uhuru Kenyatta. This was fueled by the speedy endorsement of the contested election by a majority of the western representatives. Many would be left on the focus radar and that’s where I picked up the story of Siddharth. 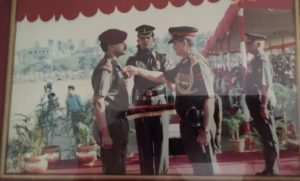 Through UNDP which is a partner and a funder of IEBC, the UN was accused of meddling in the election in an alleged move to favor the re-election of Uhuru Kenyatta. In the crossfire, Ms. Sheila Ngatia the Assistant Country Director in UNDP Kenya, became a target of a vicious social media campaign of claims that her father is Mr. Fred Ngatia, President Kenyatta’s lawyer join to the conspiracy dots that she was working in favor of Uhuru, but when Kenya Insights later did a background check on the rumours on social media, we found out that Sheila’s father passed away 10 years ago and had no relations with the President’s lawyer.

However, the onslaught impugning the motives of the head of the UN Country Team in Kenya Mr. Siddharth Chatterjee didn’t stop but instead opened. His relationship with Jubilee government would specifically be scrutinized and a curious case of his close ties with Ambassador Amina who by then was looking for the top AU seat came into focus. He was accused of lobbying for her in a move that compromised the UN’s independence and nonpartisan stands.

Kenya Insights had an interview with Sid an on this particular issue of lobbying for Amina which he vehemently denies. In his defense, he wouldn’t have taken a compromising position, “I as a UN staff have no influence to lobby anyone for a political position like the AU. Besides not only does it go against the principles of the UN  but contradicts all the values I uphold. I was specially invited to go to Addis to discuss the Kenya Ethiopia Cross-border programme, which has the potential of transforming peace, security and human development for the good. The President of Kenya and the Prime Minister of Ethiopia take this programme very seriously. . Ambassador Amina Mohamed and former Foreign Minster of Ethiopia Dr Tedros signed the MOU and wrote a joint OP-ED about this fascinating initiative. Kenya and Ethiopia: A cross-border initiative to advance peace and development..”The programme that was to foster tranquillity along the border for development was a brain of the two governments in partnership with the IGAD and the UN.

For many, the existence of Sid became a reality after the August Election, that’s when he started hitting the social media waves. We track back the talk from Matthew Russel who’s a UN HQ’s based blogger. He opened a case and pushed it to Kenya’s blogosphere on on dishonest Sid was at his work, in fact, it is through him that we came to know that the coordinator was a son-in-law to the former Sec Gen, Ban Ki-Moon, Matthew insists Sid’s appointment was not based on merits but influenced based on nepotism n his relationship with Moon, a claim that Sid himself laughs off.  “I met my wife in 2004 in Sudan during the Darfur crisis and married in 2006. This is well before Mr. Ban became the United Nations Secretary-General. In fact I joined the UN in 1997(10 years before Mr Ban and rose from an IFLD 4 in Bosnia to a P-5 in Somalia by November 2004.” An article to clarify this was published by Forbes –  Misread Nepotism At The U.N.: Why Siddharth Chatterjee’s Well-Earned Appointment Requires Explanation

Sid believes that he’s a target of fake news championed by the UN based controversial blogger, “Mr. Matthew Russell Lee, who runs a blog called Inner City Press. Over the last 10 years, he has repeatedly published malicious, false and libelous allegations against me. This started in 2007 and continues to date.” He said.

He continues, “Just to clarify, I was invited to apply by UNDP for this role. Following that I got the support of UNFPA (I was the UNFPA Representative to Kenya) to do so, I applied for the UN Resident Coordinator role to Kenya in 2016. Again I went through a selection process called the Inter-Agency Appointments Panel and was shortlisted. Regardless of the decision being taken, the final decision rests with the Government of the country where an RC is being proposed to.”

Blogger Cyprian Nyakundi who has made a name out of controversy dwelling on fraud cases and accountability advocacy, accused the coordinator on his blog that he got together with John Kerry and Tony Blair to rig the elections in favor of Jubilee and that he profited from Kenya’s SGR project. We’ve however established that neither UNDP nor the UN had nothing to do with this project. Sid terms the allegations as “outrageous and malicious statements. This is not just absurd but totally fake news.”

For a soldier who later turned on his career to become a humanitarian and a development enthusiast, Sid holds a strong belief that Kenya is a beacon of hope regardless of the intrigues and turmoil it undergoes. 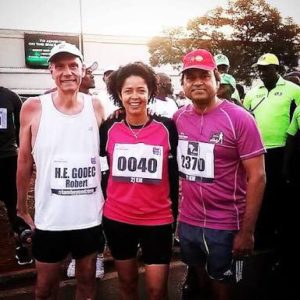 SIDDHARTH CHATTERJEE with US Ambassador Godec on finishing a 21KM race for the anti FGM campaign.

Mohamed Guleid, former Deputy Governor testifies
Mr. Chatterjee for having been at the forefront personally in the struggle for empowering those usually on the fringes of social and economic agenda, including women and girls, as well as the youth.

He has championed the delivery of maternal, child and adolescent health services to areas previously left out and brought private sector participation in remote North Eastern counties. We have witnessed the different organizations like UNDP, UNFPA, Unicef, WHO, UN Women, FAO and many others are making in the Frontier Counties. Here is an opinion piece by Mr Guleid. “Falsehoods targeting development partners end up hurting us”

Kenya Insights sought to know what is the motivational factor behind Sid despite being a target of negative publicity, especially on social media, “ I am the face of UNDP so it is easy to attack me. The fake news got propagated after the elections. I can take the attacks but will stand in between when it comes to my staff. The safety, security and reputation of my staff is paramount and non-negotiable. I will go to the end of the earth to defend them ” He said. “The man from Inner City Press reached out to others who are perhaps more gullible. As you can see he has an obsessed mind. He has the facts but is nudged on by vested interests.”  He adds. ” I have responded to his allegations but my response is difficult to find. So here it is: https://siddharthchatterjee-wws.blogspot.co.ke/2017/02/siddharth-chatterjees-response-to-mr.html”

As for the motivational factors, Mr. Chatterjee told Kenya Insights, “My father was a refugee from East Pakistan now Bangladesh. I have seen first hand on what displacements does to families and how it impoverishes them. I feel for people that are displaced by conflicts of natural disasters.”

“I have a personal mission to champion the rights of women and girls because I have seen how this half of humanity has been treated and what harm that is bringing to our societies. As a young officer in the Indian Special Forces, at the front lines of combat in counterinsurgency environments, I have seen how brutal and savage all parties to the conflict become. Again I have seen this in my work at the UN posted in Iraq, South Sudan, Darfur, and Somalia.” He continues. 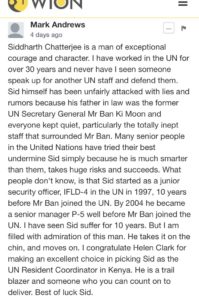 “The years I spent in fragile environments will always remain a poignant reminder of the disparate harm that women are predisposed to whenever one form or other of humanitarian crisis arises. Some were victims of rape and torture, others were widowed at young ages, their husbands murdered or kidnapped. I have seen how rape is used as a weapon in conflicts. I have seen children as young as 5 being recruited as child soldiers. In many of the countries I have worked in, disease outbreaks, lack of water and sanitation were the order of the day. Reproductive health services, including midwifery outreach services, antenatal care, management of prenatal complications and sexually transmitted diseases including HIV/AIDS were not readily available in conflict regions. These problems had particularly harsh consequences among women and children. I believe that access to quality health care must be a fundamental and nonnegotiable human right.” He concludes.

Sid who runs to work regularly and most Sundays does a 21KMs half marathon, wraps up our talk which is basically a right of reply to accusations flying around he quotes Rev. Charles Haddon Spurgeon, “If you want the truth to go around the world you must hire an express train to pull it; but if you want a lie to go around the world, it will fly; it is light as a feather and a breath will carry it.”
Kenya Insights allows guest blogging, if you want to be published on Kenya’s most authoritative and accurate blog, have an expose, news TIPS, story angles, human interest stories, drop us an email on [email protected] or via Telegram
Related Topics:InvestigationsSiddharth ChatterjeeUNUnited Nations
Up Next