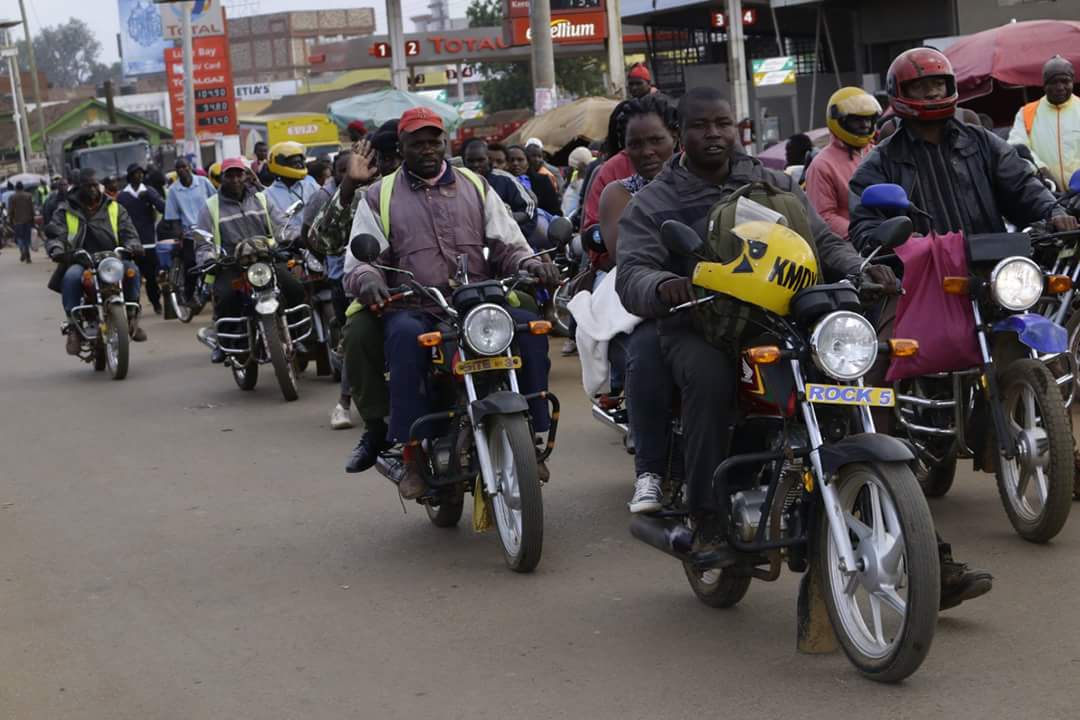 Boda riders have slowly been morphing into a dangerous gang with a great sense of self-entitlement, for a group that operates like criminal gang in a predominantly lawless space, they’re the law unto themselves. For them, they’re the prosecutors and judges and above it all, they’re always right. The riders have set a bad precedence and reputation across the country such that their operations have become a security concern.

Weeks ago a bus belonging to Otange Transport was reduced into ashes in HomaBay by a group of boda-boda rider. The incident that occurred in the morning involved a rider probably high on marijuana a diet drug in the region, rammed into the stationary bus injuring the rider and the drunk passenger he was ferrying, both were seriously injured. Within a short period, other riders surrounded the bus and without consideration that it was their colleague on the wrong, they went ahead and set ablaze the bus and in the line burning passengers luggage as well.

Such scenarios have been replicated across the country where the riders flaw the law, cause accidents only to play victims. Often when one has been caught up on the wrong side, they signal their colleagues who quickly surround the victim. Very common in Nairobi, a boda-boda rider would hit a motorist only to surround, harass even to the extent of violence the motorist until they extort him for freedom. Imagine how painful it is paying for being on the right, arguing or lengthening talks with them will only escalate to more harmful end. 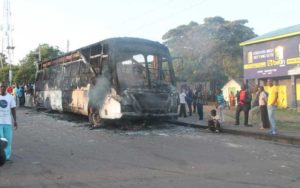 A few years back the then Senate Speaker Ekwe Ethuro was heading his Kitengela home when a boda-boda rider intentionally scratched on one of the cars in his convoy, as tradition, group over fifty riders surrounded the convoy demanding ‘compensation’. They didn’t know it was him inside and when one of them noticed him, he instructed the driver to speed off, they then followed him in droves until they again cornered the convoy. The irate riders demanded cash or they threatened to burn down all the cars. Sensing danger, fire was opened and two of the riders were shot dead at point-blank sending away the rest. This is how they operate, extortion.

Common in the Western region of Kenya, Boda Boda riders are more than just that, they call the shots, in the political season, if they don’t endorse your candidature which is mostly done through bribery then your bid would be dead on arrival, it is a cartel that must be bribed. Politicians love using them as well. If you have scores to settle with an opponent all to need to do is hire these boys most who’re criminals masquerading as riders.

In the half of December, at least 200 people have lost their lives in road accidents substantially by matatus but boda-boda has also claimed many lives. It has almost become a synonymous line with most accidents occurring when a driver was trying to avoid hitting a boda-boda rider, they’re often on the wrong side.

Traffic rules are the last thing they observe, they’ll change lanes, make deadly turns and entrances with no care. Most robberies and executions in the city have been attributed to motorbike riders, it has become a real concern such that some high-end estates have totally banned entrance of boda boda given their criminal reputation. A good number of criminals are camouflaged as operators, several security reports have highlighted.

In a country with 56% unemployment score, Boda Boda industry has undoubtedly offered sizeable opportunities, however, slowly and steadily, this is turning into a country’s menace with operators running like a criminal racket. Impunity exhibited shouldn’t be allowed to persist and strict rule adherence needs to be enforced, if not, we’re breeding a beast that soon and very soon will turn uncontrollable, will turn around and devour. If we’re to contain high criminal activities, minimize road accidents then discipline must be instilled, the law must be applied in full force. Until then, we’re under Boda Boda terrorism.

Related Content:  Revealed: How Sh2.2B Was Lost At The Nairobi Hospital Within A Year
Kenya Insights allows guest blogging, if you want to be published on Kenya’s most authoritative and accurate blog, have an expose, news TIPS, story angles, human interest stories, drop us an email on [email protected] or via Telegram
Related Topics:
Up Next

Siddharth Chatterjee: UN’s Man of Honour or Disgrace To Kenya