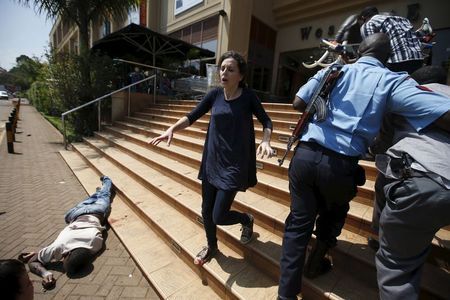 WARNING: Some of the images you might find graphic

On Saturday, Sept. 21, 2013, the Somali militant group al-Shabab carried out an assault on Kenya’s Westgate Mall in one of the worst terrorist attacks in the country’s history. A group of young gunmen stalked the halls and stores of the upscale Nairobi shopping center, and methodically murdered at least 67 people. News of the attack seized the world’s attention, dominating international media coverage for days.

But much of that reporting was confused and contradictory, mirroring the litany of false and misleading statements made by Kenyan authorities. There were between 10 and 15 gunmen, the interior minister said. Two or three of them were Americans, said another cabinet minister. Together they took hostages, used heavy explosives, and pulled off a three-day siege, according to other government sources. Except none of these things were true.

Far from a dramatic three-day standoff, the assault on the Westgate Mall lasted only a few hours, almost all of it taking place before Kenyan security forces even entered the building. When they finally did, it was only to shoot at one another before going on an armed looting spree that resulted in the collapse of the rear of the building, destroyed with a rocket-propelled grenade. And there were only four gunmen, all of whom were buried in the rubble, along with much of the forensic evidence.

During the roughly three-and-a-half hours that the killers were loose in the mall, there was virtually no organized government response. But while Kenyan officials prevaricated, an unlikely coalition of licensed civilian gun owners and brave, resourceful individual police officers took it upon themselves to mount a rescue effort. Pieced together over 10 months from more than three dozen interviews with survivors, first responders, security officers, and investigators, the following account brings their story to life for the first time since the horrific terrorist attack occurred exactly two years ago.

One of the victims wreaths on pain

By late Saturday afternoon, all four gunmen were holed up in a storeroom at the back of Nakumatt. They never came out again. Most of the at least 67 people who were killed at Westgate died in the first hour of the attack, before any rescue effort had even begun. Kenyan security forces did not launch their operation until 4:00 p.m., by which time it was already too late: Most of those who would escape had already escaped; most of those who would be wounded had already been struck; and most of those who would die were already dead. It is likely that many of the victims bled to death in the slow hours between the start of the attack and the arrival of help.

Related Content:  AoN Insurance In A Tendering Scam To Win A Sh.15Billion Deal With TSC

The elite Recce Squad, eventually entered from the rooftop car park. Kenyan soldiers entered from the ground floor. Neither group was in communication with the other. Soon afterwards, there was a shootout on the first floor between the Recce Squad and the soldiers, in which the police unit’s commander was killed and another two officers were wounded. The remaining Recce Squad members pulled out of the operation in disgust, and the army, too, withdrew.

After the friendly fire incident, Westgate became a military operation. Armored personnel carriers with heavy machine guns patrolled in front of the mall; soldiers with rifles and rocket-propelled grenades moved in and out; and sporadic gunfire and explosions echoed from within. On Sunday, Kenya’s interior minister claimed that there were as many as 15 attackers and that the siege was ongoing. By that time, however, the mall was mostly under the army’s control. On Monday, a rocket fired by the Kenyan army collapsed the back of the mall, dropping the rooftop car park into the basement, pancaking the room where the terrorists had taken shelter and throwing a thick plume of smoke into the Nairobi sky. The fire burned for days. Parked cars with full fuel tanks fell into the gaping hole and exploded like bombs.

The heat, toxins, and structural instability of the building kept FBI agents brought in to run the forensic investigation from gathering any evidence for weeks. When they finally set to work, what they found were the charred remains of three bodies, alongside parts of three assault rifles, in roughly the location where the storeroom had been — and far from any other human remains. The fourth gunman is also believed to have died in the fire. The fragments of spine and jaw recovered by the FBI were so burned, and at such high temperatures, that neither teeth nor DNA would have likely offered much clue to the assailants’ identities.

KDF soldiers making an entrance to the mall

Before and after blowing up the mall, the Kenyan army looted shops, broke open safes, and emptied tills. The looting was captured on closed-circuit television cameras and reported by business owners after they returned to the mall and found their shops ransacked and stock missing. A public inquiry into the disastrously ineffective security response was promised but never delivered. Somehow, Kenya’s interior minister managed to cling to his job for another 15 months. The army chief retired this spring, with full honors. Westgate reopened in July, nearly 22 months after the attack. Kenyan soldiers are still in Somalia, but they are now part of the multinational African Union force that protects the Somali government and fights al-Shabab, which still controls some parts of the countryside.

In April of this year, al-Shabab gunmen launched an attack in Garissa, in Kenya’s northeast, that was strikingly similar to Westgate. Four armed men broke into a university campus and rounded up students in a dormitory. After letting the Muslims go, they executed the others. One hundred and forty-eight people died that day, almost all of them young students. It was al-Shabab’s deadliest ever attack. For Kenya, Westgate was just the beginning.

The Commission of Inquiry promised by President Uhuru Kenyatta in the days following the attack has failed to materialize. A report on the attack tabled by a Joint Parliamentary Committee was rejected by the National Assembly. The KDF was reported to have prepared a report on its actions during the siege but this is yet to be published.

With the truth On What really transpired in the mall and questions hanging as to whether the terrorists were really killed, what have we learnt as a country to prevent any of such attacks, how equipped are the officers. The victims both surviving needed more than just financial compensation but the entire truth which will remain a mystery from the trend of events. Key questions that will not leave minds soon; Could the attack have been prevented? Why did they have to collapse the roof? What happened to the terrorists? Did they have a plan? When were the terrorists defeated? Could more people have been saved?

Kenya Insights allows guest blogging, if you want to be published on Kenya’s most authoritative and accurate blog, have an expose, news, story angles, human interest stories, drop us an email on tips.kenyainsights@gmail.com or via Telegram
Related Topics:InvestigationsSecurity
Up Next