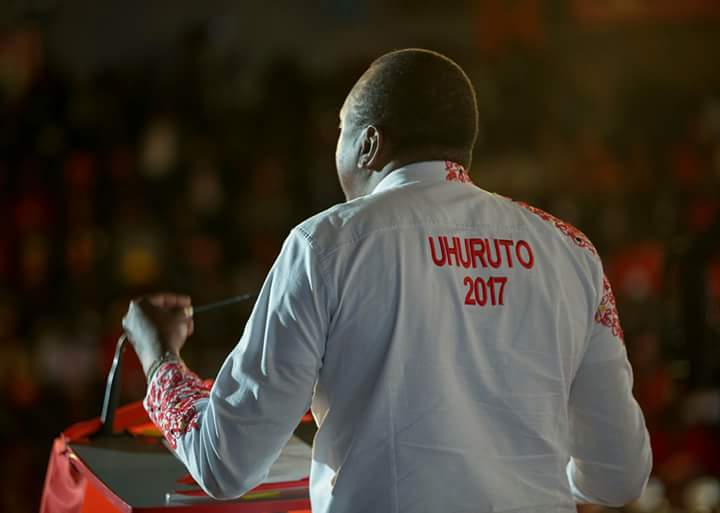 President Uhuru when he was formally endorsed by JP affiliate parties to fly the Presidential flag for the August election.

Being a political season in a highly contested election, candidates are putting up the best teams, arsenal and sharpest strategies to woo and win hearts of the 19M IEBC registered voters. With barely two months to the 8th Aug date with electorates, jubilee and NASA are not taking anything into chances as they go full offensive to gather as many votes and win as many hearts.

While Jubilee won the election in 2013 campaigning on the youthful, new leadership and the ICC factor that brought together President Uhuru and his Deputy William Ruto, the cards have had to change four years later into power in popularizing their campaign. Jubilee is using the development platform as their core campaign material, greatly infrastructural projects. Jubilee hopes through the GoK Delivers campaign, the structures they’ve laid in their tenure will earn them another term in office.

Within the years of Jubilee rule, the state of Kenyan economy has become a center of focus with GDP showing positive index yet apparatus showing otherwise. Kenya thanks to jubilee now has record 4.5T public debt with inflation rate extremely high. Unemployment rate according to multiple sources now stands at 46% a disturbing figure given the fact that the youths make up to 67% of the 45M population. Corruption has been Jubilee’s greatest disgrace with an unimaginable amount of public funds stolen without repercussions. The cost of living has sailed from worse to worst under the last years of Jubilee administration leaving it with an ogre image. 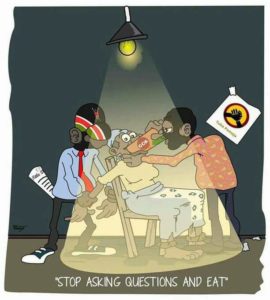 A cartoon illustrating the state of nation on maize fiasco.

NASA is capitalizing on the failures of Jubilee in their pursuit of Statehouse occupation. Cost of living being high influenced the Unga revolution given the high prices of flour. Being a staple food to many, Unga was definitely going to be a winning campaign agenda for NASA. On realizing they were losing the scoring and NASA having an upper hand, jubilee swiftly moved in with ‘help’ to lower the maize prices through subsidy to millers. Unga prices would then drastically drop from 170 to 90 following GoK’s 6B subsidy which in essence is another burden to the taxpayer who’ll foot the bill. The Unga price reduction took off the greatest campaign asset from NASA with Jubilee now coming in as the. While the whole thing is surrounded with controversy gave crystal clear fingerprints of artificial food shortage with highly placed state officials as the chief architects, one thing is pretty obvious that food shortage is and was meant to be a campaign material for both camps.

It is not a coincidence that farmers were supplied with fake fertilizer and seeds that failed leading to drop in yield. It’s not a miracle that after DP Ruto, Agriculture CS Bett gave food security affirmation in January saying the Strategic Grains Reserve had enough maize to sustain the population only for same maize to disappear mysteriously creating a void in supply. It is not a miracle that the very day KRA have notice of tax exemption on maize a mysterious shop vessel supposedly full with maize left Durban for Mombasa and it is not a miracle that the very day that the maize was offloaded from the shop in Mombasa, it was milled, packed full with GoK subsidy stamp and supplied the very day. What I’m saying is the system is self-exposing, powerful individuals we’re yet to establish drained the Strategic Grains Reserve took maize and hid in some ship in the High seas waiting for the subsidy and tax exemption announcement to ‘import’ that maize from Mexico. Good security is government’s priority, A lapse in The system is directly linked to them.

Jubilee castigated the opposition for taking advantage of the food shortage to campaign against them calling it bloodsucking. However, a surface level investigation by Kenya Insights has unearthed how Jubilee using sophisticated propaganda tactics by Cambridge Analytica, are now fully and milking dry the situation in a well executed Google Search Algorithms manipulation. You’ll also realize the Unga released are packaged with GoK stamp a subliminal message meant to sell jubilee agenda as the rescue agent while it is pretty clear they’re fully to blame for creating the current situation thanks to rampant corruption and incompetent leadership.

Kenya Insights has discovered that A Google Search for the word ‘Unga’ will bring you a paid ad of an article from the Standard newspaper with a tweaked headline portraying President as the savior in the Unga quagmire. It is unclear yet of Standard Group is part of this campaign since their article is the one promoted to appear on Google Search pages. The sole message here is to paint Uhuru as stainless as possible and show how caring he is by reducing the price of Unga. It is worth mentioning that, the subsidy of 6B on maize is not a gift from the government, this a fresh debt to the already 4.5T. What this means, You and I will pay for that 6B. 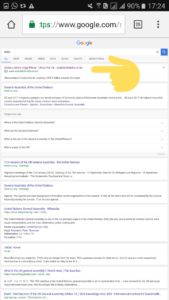 We noticed that when you search for anything on Google and add ‘Unga in the search, the promoted standard newspaper article pops the top on every chat. What this strategy says is that looking for anything touching on Unga will first lead you to a praise and worship article on Uhuru and how he’s the one who has saved Kenya from starvation. You by now can tell jubilee is using the Unga topic to campaign heavily online. Google is the biggest search tool and.most visited in Kenya. By investing in the big data analytics, Jubilee knows a good number of people accessing Google will be reached.

Related Content:  How Hackers Are Stealing Billions From Kenya’s Banks And Getting Away With It

Cambridge Analytica, the propaganda firm that jubilee hired for its digital wizardry, ìs famed for secretly influencing the outcome of Brexit and US presidential election. Politically motivated third parties including the “alt-right”, a far-right movement in the US, use a variety of techniques to trick the algorithm and push propaganda and misinformation higher up Google’s search rankings.

These insidious manipulations – both by Google and by third parties trying to game the system – impact how users of the search engine perceive the world, even influencing the way they vote. This has led some researchers to study Google’s role in the US presidential election.

Robert Epstein, a computer scientist from the American Institute for Behavioral Research and Technology spent four years trying to reverse engineer Google’s search algorithms. He believes, based on systematic research, that Google has the power to rig elections through something he calls the search engine manipulation effect (SEME).

Epstein conducted five experiments in two countries to find that biased rankings in search results can shift the opinions of undecided voters. If Google tweaks its algorithm to show more positive search results for a candidate, the searcher may form a more positive opinion of that candidate.

In September 2016, Epstein released findings, published through Russian news agency Sputnik News, that indicated Google had suppressed negative autocomplete search results relating to Hillary Clinton. This is the exact situation in Kenya right now, we searched for ‘Raila Unga’ and the results was intriguing. We discovered that unlike normal Google run that puts latest articles on top results, searching for Raila Unga brought articles from 2010,2011…and strangely enough, all the articles are on Raila negatively with links from the past linking him with maize scandal. You add Uhuru for us all on top search and Raila’s connection with maize cartel and realize this is a well coordinated digital campaign warfare. We also noticed foreign investors owned need website Tuko as consistently appearing going to affirm our sources that they’re also part of the propaganda team. They command impressive traffic reason they were roped in. 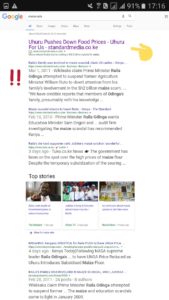 Then there’s the secret recipe of factors that feed into the algorithm Google uses to determine a web page’s importance – embedded with the biases of the humans who programmed it. These factors include how many and which other websites link to a page, how much traffic it receives, and how often a page is updated. People who are very active politically are typically the most partisan, which means that extremist views peddled actively on blogs and fringe media sites get elevated in the search ranking.

These platforms are structured in such a way that they are allowing and enabling – consciously or unconsciously – more extreme views to dominate. Appearing on the first page of Google search results can give websites with questionable editorial principles undue authority and traffic. These two manipulations can work together to have an enormous impact on people without their knowledge that they are being manipulated, and our research shows that very clearly. Virtually no one is aware of bias in search suggestions or rankings. 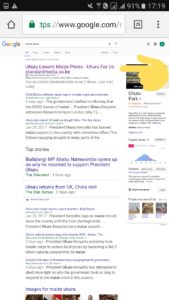 Twitter Kenya recently brought down their (TwitterKe) handle following persistent allegations that the San Francisco-based company was working with the Kenyan government to censor on trending topics that were castigating the authority. While Twitter has been accused elsewhere of employing such tactics, nothing straight can be said in this line.

All said, the new phase of political wars is on social media and perception is everything in winning votes, any side despising their opponent’s jabs is only doing so at own peril. Michael of Prison used a spoon to break prison walks literally, every jab counts that’s what I’m saying. Propaganda is part of politics If you’re targeted you neutralize with truth in a prompt well-structured communication system. We’re tired of dropping same bars so for obvious reasons some people won’t be mentioned here today. 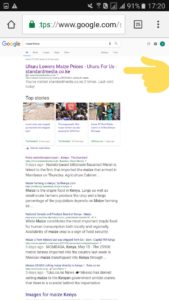 Today, it is exactly 75 days to the election date, you’ll be treated to truths, half-truths, and blatant lies. What the digital mercenaries are doing for jubilee is toxic to the targeted but a job is well done to the client who is taking over digital space to tear down Raila and his character painting him a violent, failure and a never accept defeat person. While we all hold our own perceptions to these, the character assassination continues. Lastly, it is shameful that after creating this crisis, the state still has the nerves to milk the situation dry, maximizing on digital campaigns. Normally when Google Search Algorithms lapse is revealed they rush to adjust and by the time you end reading this article, with the little secret exposed, you might find out a change in the search results.

Kenya Insights allows guest blogging, if you want to be published on Kenya’s most authoritative and accurate blog, have an expose, news TIPS, story angles, human interest stories, drop us an email on [email protected] or via Telegram
Related Topics:FeaturedFoodInvestigationsOpinionPoliticsRaila OdingaUhuru KenyattaUnga
Up Next