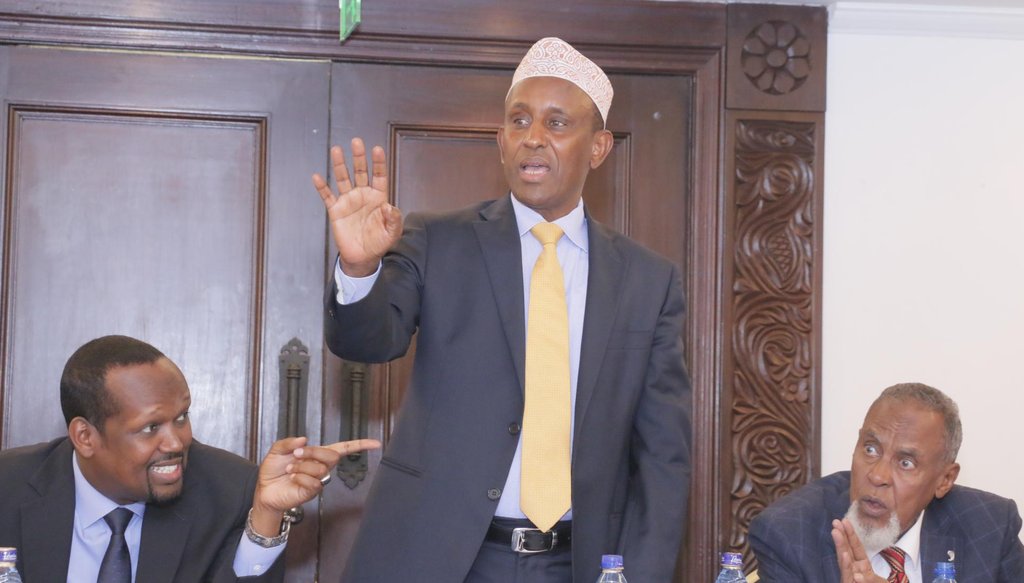 David Mwai used to operate a play station shop and a number of boda boda’s. He was approached one day with a job offer to kill someone. In Kenya, human life has no value. It’s cheaper to get someone killed than it is to bribe them. Lawyers and witnesses against powerful politicians have been killed in the past. It’s become the norm. The offer on the table for carrying out the job was Sh2.4 million. Mwai couldn’t resist.

Two years ago l wrote about how police murdered a hitman in their custody. Rebecca is alive but she can never share her story because she will be murdered like her husband. The man who hired the hitman is still the governor of Garissa @HonAliKorane. We live in a mafia state! https://t.co/brOA7f29Cu

The target for this kill was Idriss Mukhtar and his lawyer Charles Kanjama. The client, according to Mwai’s family, was Ali Korane. Ali is the current Governor of Garissa. He was working in the airforce in 1982, during the attempted coup. During the purge that followed the failed coup, he was saved by his wife, as she happened to be General Mahmoud Mohamed’s daughter, the man who quashed the coup. His father-in-law went even further to cushion Ali, by ensuring that he was absorbed into the provincial administration. He rose from the position of District Officer to Provincial Commissioner, before becoming a Permanent Secretary in retired President Moi’s regime. After the NARC government came to power, Ali started a security company. He had links in the military, the police and the National Intelligence Service and his businesses thrived.

Last year, Ali ran for public office and Idriss Muktar joined his campaign team. Idriss later fell out with Ali Korane and decided to expose the Governor’s fake academic credentials. Korane had claimed he had a masters from Nairobi University and Idriss had evidence that Korane’s academic credentials were fake. It’s alleged that Governor Korane then engaged Mohamed Hussein Aden to deal with Idriss. It is Mohammed who is alleged to have recruited David Mwai for the job and offered to pay him Sh2.4 million. The assignment was to kill Idriss and his lawyer, Charles Kanjama, who was preparing a court case to challenge Ali Korane’s academic qualifications.

On 19th August 2018, David Mwai shot Idriss in the head outside a mosque in Kileleshwa. He was supposed to shoot Idriss seven times. He tried, but the gun failed after firing three rounds. Idriss was hit in the head once and is currently admitted at Nairobi Hospital with the bullet lodged in his head. David Mwai escaped on a motorbike after the shooting.

Before Idriss was shot, he had filed a report at Kilimani Police Station claiming that he was receiving death threats from the Governor and his security people. Police tracked Mwai to Dandora Estate and on 27th August, the 28-year-old was arrested, together with his wife, Rebecca Hajila. With the mother of his two babies in custody, Mwai was shown CCTV footage of him shooting Idriss Mukhtar. Police persuaded him to confess and turn state witness. This he did, with the hope of buying his wife’s freedom, since she wasn’t part of the crime.

The failure of the Justice system to pursue justice for my client Idriss Mukhtar, who was shot in the head, is a crime crying to heaven for vengeance. And a scandal of monumental proportion. It left me with a scar on my soul. It left his family wounded & desperate.#RuleOfLaw

In his confession, Mwai said he was hired by Mohammed Hussein Aden, who worked for the Governor, through a lady known as Njoki. On Tuesday, 28th August, Mwai called his elder sister, Esther Wanjiru, and asked her to find his wife. He had been told she would be taken to Milimani Law Courts, but family members had already gone there and failed to find her. On Thursday, 30th August, Mwai called Esther and told her that he had confessed to the shooting and was ready to face the judge. He added that he’d been approached by some people, inside his cell, who said they could help him escape. Esther urged him not to do it, suggesting that they were tricking him, so they could kill him. Mwai had been given some documents to sign, but since he didn’t understand them, he had refused. That evening, during the 7pm news, Esther learned that her brother had allegedly killed himself. David Mwai’s evidence allegedly implicates Governor Korane as the mastermind and the person who would have benefited from Idriss’ murder.

The police arrested Governor Ali Korane, but following numerous phone calls, he was eventually released. Korane had threatened the investigating officers and pushed for the case file to be moved from Kilimani Police Station to CID Headquarters. The officers who had cracked the case were removed and new officers introduced to help cover up Korane’s involvement. Whereas, it is human nature to hate David Mwai for agreeing to be used as a killer, there is no excuse for the police to have murdered him inside a police cell. Mwai’s murder is to help a bigger murderer get away. I am not defending a cold-blooded killer, but it is wrong for one to be murdered inside a police cell. We live in a country with laws.

I have slept in almost every police station in Nairobi. Most police stations were built during the colonial era and the cells are horrible. The “windows” are just a small strip of an opening near the roof, barricaded with iron bars. As someone who has been arrested enough times, I can tell you for certain that you’re never alone inside a cell. Belts and shoe straps are confiscated and if someone brings you food, they must taste it first.

A country must be governed by the rule of law. David Mwai deserved his day in court, as do his masters, who hired him to kill, and his murderers too. If the killers of Mwai get away with murder, what will stop any other accused person from killing a whistleblower, a witness? David Mwai’s murderers were paid by the same person who paid David to kill Iddriss Mukhtar.

Related Content:  Real Owners Of Sportpesa And Why The Betting Firm Is Linked To Fraud From Kenya To UK

Six people are in police custody in connection with Idriss Mukhtar’s shooting, but the main culprit may not be among them. The police have denied David Mwai’s family access to view his body and his wife is still missing. Betrayed by law enforcement, now there is pressure on Iddris’ family to settle this issue out of court, using camels. Tradition, like political privilege, seems only to be invoked to defend the rich, never the poor. Iddris’ family wants justice. We want the laws of the land to be upheld.

How Transnational Cartels Dictates What You Take For Breakfast In Kenya