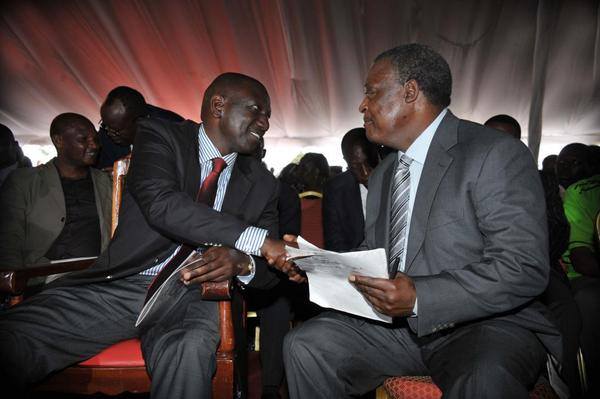 Joined at the hip, the YK92 housemates don’t seem to move far away from each other. Following public spat, by Cyrus Jirongo and Ruto, their relationship was seen to have hit final nail beyond mending. However, in politics, there are no permanent enemies just different interests. Jirongo blamed Ruto for being behind the assassination of Jacob Juma. During the funeral, Jirongo unleashed secrets of how the DP strangled a young man to death and also revealed that the slain businessman had at one point slapped Ruto after a disagreement.

Jirongo went on extreme media attack on Ruto who laughed him off for being jealous of his success. Jirongo’s media frenzy was deflated following the fatal shooting of his son in law in what he claims was a warning shot to his life after his public onslaught.

Jirongo boasts of vast business empire and prides for having made it to the list of billionaires by the age of 30. Jirongo attained sustainable power and influence during the Nyayo era following his support for Moi’sMoi’s re-election and leading the youths in the course.

However, Jirongo has been facing liquidity challenges since he was thrown into opposition. The former Lugari MP has been jumping from the courtroom to the next battling auctioneers a clear sign that his financial crisis is a reality. Things got even worse when his long-term friend and wheeler-dealer in the city Brian Yong’o wanted Jirongo to be declared bankrupt over a Sh25M debt that he failed to pay. COTU chairman also accused Jirongo of defaulting a small debt of Sh100M.

Faced with financial and political relevance crisis, Jirongo has been forced to swallow his choking pride to make peace with Ruto who now not only enjoys power privileges but is an unchallenged figure in the big deals in The system. Kenya Insights has learned that the two are back and working together in the background.

Jirongo has been held at the mercies of Jubilee like in the instance of the controversial 1,000 acres in Nairobi’s Ruai area which could not have been registered in another name since it had been used to acquire money from Post Bank Credit then headed by Francis Chahonyo. According to CBK sources, Jirongo’s 1,000-acre plot in Ruai Estate (Land Ref: No. 12973/3) was to be sold to recover Sh20 billion he took from Post Bank Credit but when he got the wind, he rushed to court and got an injunction just two days before auctioneers were due to put the land up for sale. The vast land is said to be valued over Sh7 billion.

The CBK had planned to auction the land to recover money that collapsed Post Bank Credit lent Sololo Outlets, a company owned by Jirongo. The orders stopped and restrained Kenya Deposit Insurance Corporation from selling the land pending the hearing and determination of the application.
Sololo had defaulted on the loan, which was extended to it for the construction of residential estates that were to be sold to the National Social Security Fund.

The NSSF had an agreement with Sololo to buy an incomplete housing project in Nairobi’s South B Hazina Estate. Jirongo had used the Ruai land owned by another of his companies, Offshore Trading, to guarantee the loan. Jirongo claimed the loan had 26 guarantors with the principal guarantor being Cyrot Limited. Others are Davy Koech, Kuza Farms and Allied Limited, Kipa and Sons and Cyper Enterprises.
Jirongo’s deal with the NSSF did not have a happy ending after he raised the price of the estate to Sh2.65 billion in May 1993 from an initial Sh1.2 billion, citing a jump in material costs. The NSSF terminated the contract, having paid Sh900 million and hired a different contractor to finish the work. The estate consisted of 420 homes, a school, and a shopping center.

Post Bank Credit was one of the banks involved in the infamous Goldenberg scandal which brought several banks to their knees during the Moi era when Jirongo was an influential political figure at the time after he led YK92 to campaign for Daniel Moi. In 2011, Jirongo was paid Sh490 million by the NSSF as an out-of-court settlement for a Sh4.5 billion claim for breach of contract relating to the estate transaction. Jirongo had disclosed that he had planned to sell the Ruai land in order to settle a Sh32 million debt owed to Emris Investments in another land row. Emris had gone to court after Jirongo failed to honour a commitment to pay the cash.

At one time, Jirongo had to fight to retain ownership of the1,000 acre Ruai land after a group of squatters laid claim to the property. A group of squatters under Ruai Embakasi Youth United Development Organisation (Reyuda) wanted the High Court to nullify Jirongo’s title deed and declare it the valid owner of the massive tract of land. The squatters claimed that they have occupied the land since 1993 and wanted themselves declared its valid owners.
With DP offsetting the debt he owes Jirongo, the former Lugari MP’s presence is being felt in both political and business circles.
The newfound relationship between Ruto and Jirongo is aimed at striking business and political deals. On the political front, Jirongo is to checkmate Musalia Mudavadi in Western politics. This comes at a time when Raila has been named the NASA presidential candidate and language of voter apathy emerging.

Kenya Insights has learned that Jirongo has been charged with igniting a voter apathy in the Luhya community capitalizing on the ‘shortchanging’ of Luhyas in the NASA deal. It didn’t come as a shocker that Jirongo rose from the dead to surface in the media the same day NASA deal was made public.

Jirongo who was never a party in NASA and the presidential candidate selection process suddenly had a voice on the topic. From our source, Jirongo is scheduled to hold ‘protest’ rallies across the Western region in a bid to incite locals against NASA and subsequently rejecting Raila presidency.

The plot has been steady including fabricated media stories to paint a circus scenario and discontent in the Western region. Another source in Luanda revealed to us how NIS officials in conspiracy with the media offered bribes to locals in Luanda market to give dismissive remarks on Raila candidature. Media houses, K24 and Citizen News, aired the clips. Capital News ran a story how a huge protest was held in Kakamega against NASA line-up while on the ground there was no such an activity. The media has been infiltrated with propaganda agents.

Jirongo is posed to run for the presidency under his party UDM. Even though his bid would not make a worthy effect, he sure will have played a role in yanking votes from NASA in Luhya by capitalizing on voter apathy. For the favors to keep coming and Jirongo to stay afloat without distinction, he has no alternative but be the puppet for Ruto.

Jirongo is a cunning political animal who at day time talks ill of Ruto but at night, he dines and wines with him. In Ruto’s bag of puppets is one Kenneth Marende who is set to be vying in Nairobi Governorship though it has remained a mere speculation. We learn that Marende who’s role is to divide the Luhya vote in Nairobi to trounce Kidero, is yet to make up his mind since Ruto is yet to fully fulfil his part and release finances. Marende, Jirongo as Ruto have been doing businesses at KPLC where the former speaker is Board Chair. Jirongo is particularly blaming Raila for his financial crippling who he says sealed off his business deals in Tanzania.

Kenya Insights allows guest blogging, if you want to be published on Kenya’s most authoritative and accurate blog, have an expose, news TIPS, story angles, human interest stories, drop us an email on [email protected] or via Telegram
Related Topics:Cyrus JirongoFeaturedInvestigationsOpinionPoliticsWilliam Ruto
Up Next