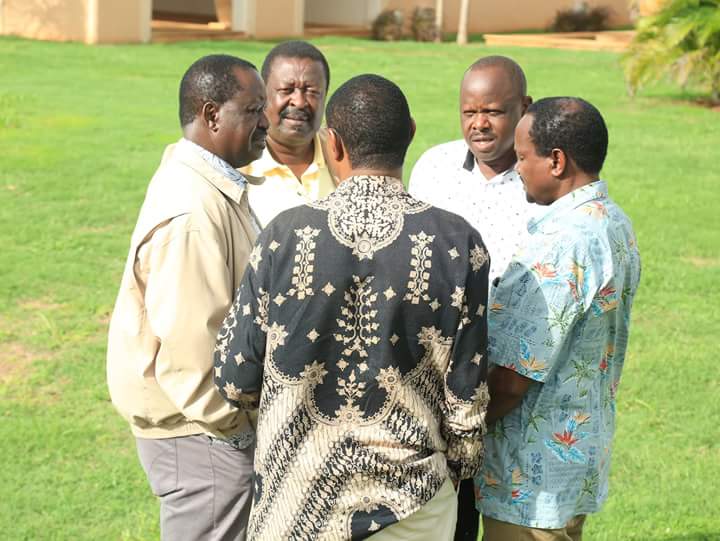 A week after naming Raila as their presidential candidate, NASA has already hit the trail with a strategic retreat in Mombasa. The campaigns are yet to kick off officially and with nominations now over, the warm up to the brutal battle ahead with Jubilee has just started.

While exuding confidence in a Raila presidency come August, the strategic team has raised concerns coming from latest developments from IEBC.

On 4th of April The High Court of Kenya, in a unanimous decision, ruled that presidential election results declared at the polling station and constituency level are final and cannot be overturned unless by order of the Court. This decision reaffirmed the provisions of the Constitution on the finality of elections results declared at the Constituency level. This also dealt a big blow to dishonest attempts by corrupted officials who manipulate figures before making them official at the central tally center. This particular decision by The Court, in a nutshell, will make rigging of elections come August an uphill task.

It, therefore, concerns as to why the Independent Electoral and Boundaries Commission has decided to appeal that decision. In whose interest is this appeal made? “As NASA We would like to make it clear that If the IEBC continues with this mischief, we will NOT participate in the Elections of 2017,” NASA said in a statement this afternoon. 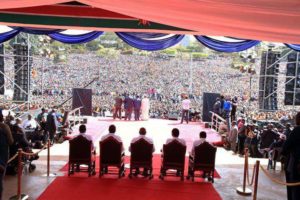 NASA rally at Uhuru Park during the flagbearer naming event

IEBC is admitting that they have been changing constituency results and are appealing the decision to continue improving results once announced at the constituencies. The IEBC is looking to the courts to allow it to change election results as declared at polling station and constituencies. Who stands to benefit from this appeal? The results at the constituency levels will be announced by returning officers who are IEBC officials; It is, therefore, illogical to why the nerve center would be hesitant to use the raw data from their officers on the ground.

NASA now claims that IEBC attention that the importation of Biometric/ Electronic Voter Identification kits was done without the same being subjected to pre-export verification. The opposition has now given fresh demands that:
1. That These EVID kits be subjected to public inspection to confirm that they are suitable for the intended purpose.

2. That these EVID kits have to be used in the forthcoming voter verification exercise.

3. That these EVID kits be deployed and distributed to all polling stations for purposes of supplementing the voter verification exercise.

IEBC has the sole obligation of delivering a free and fair election which has the pivotal role in post-election sanity. A poorly managed and scandalous elections will only fuel chaos and violence in this country, therefore, nothing whatsoever must be done to undermine the credibility of the process. IEBC is yet to fully won the trust of most Kenyans due to their real or imagined alignment with Jubilee, and that is disastrous. Making suspicious amendments as scraping the provision ruled by the court will only work in breaking the little trust left on IEBC.

Related Content:  Garissa Leaders Throw The Weight Behind BBI
Kenya Insights allows guest blogging, if you want to be published on Kenya’s most authoritative and accurate blog, have an expose, news TIPS, story angles, human interest stories, drop us an email on [email protected] or via Telegram
Related Topics:
Up Next

Raila Loses To Uhuru Even Before The Campaigns Officially Kicks Off