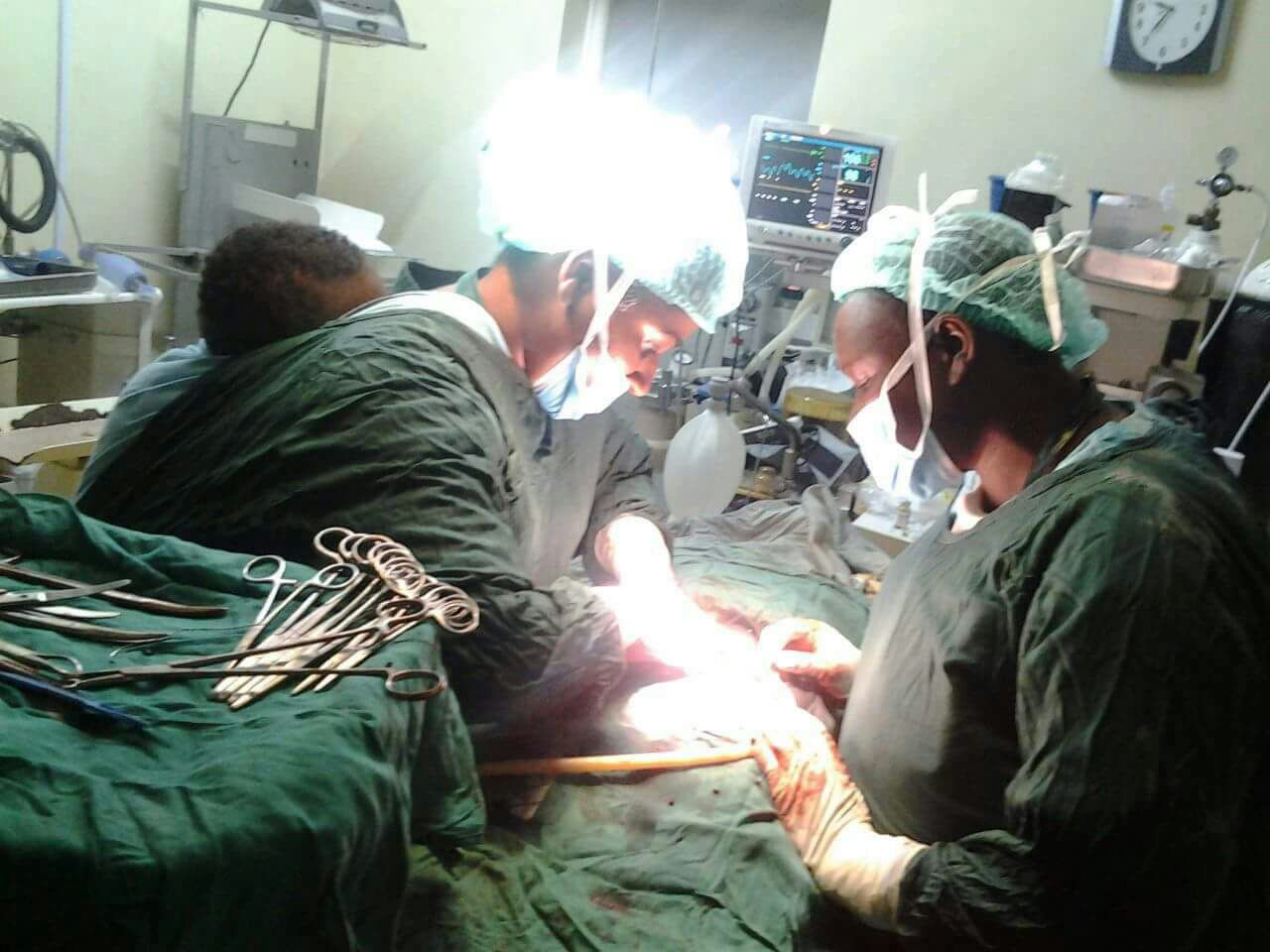 Kenyan doctors have been in a month-long stretch strike which has escalated into a national health crisis with the government not giving any signs of the positive will to end the crisis that has left poor Kenyans to nothing but God’s mercy.

The Government given the writings in the wall have decided to turn a complete dead ear on the CBA demands by the Doctors an agreement which the government negotiated with them in 2013. When reality caught up with them to honor the agreement, the government instead resorted to offensive to demonize the Doctors for putting ahead personal demands ahead of calling obligation of their course. This laughable coming at a time when the government is rocked by corruption scandals including the ministry of health. Who’s selfish here? Doctors are simply demanding for what has been negotiated and government inked the deal so what’s wrong in demanding what you rightfully deserve?

A lot of lies has been peddled around the strike in the desperate bid to exonerate government and dump heap of blames on the Doctors. Here are vital CBA points that we must sink in:

1) 2011 December, the doctors’ Union (KMPDU) called for a strike citing various challenges in the health sector including but not limited to the working conditions of doctors.

2) 2011 December a committee was formed chaired by the then Minister for Finance (now our president Uhuru Kenyatta). It was agreed that their grievances were valid. Some concessions were given in the Return to Work Formula with the promise that further discussions between various sectors (Ministry of Health, Public Service Commission, Salary review commission and the union) would work out a longer-term plan that will address human resource issues in the health sector particularly touching on doctors.

3) After long drawn out discussions in 2013 June, a Collective Bargaining Agreement (CBA) was signed by the then PS for Health (Mr. Mark Bor) and the Union that discussed amongst others, how doctors were graded in the public service scheme, promotions, training, disciplinary actions, grievances, transfers between counties and central government, research fund for enhancing medicine, postgraduate training, internship postings, working hours for doctors, etc. It actions Nelson provided a scheme of service that was a revision of the current one that dates 1994!

4) Under the labor laws, it is the responsibility of the employer (in this case the Ministry of Health) to file the CBA with the Industrial Court for implementation.

5) Since 2013, the union has been given the run around by the Ministry of Health regarding them implementation of the legally binding document. The SRC was mandated to advise the Ministry of Health on the proposed salaries from the union. They have never done so. The union also wrote to the Labour Ministry citing the above matters, but no response was received.
The Public Service Commission in May 2016 also approved the much-needed Scheme of Service for doctors. The Ministry of health to date has never gazetted it.

6) After much frustration, the union went to court in 2015. One year later October 2016, the court issued a ruling upholding the legality of the CBA. Apparently, the Ministry of health were denying that they were party to it. The court ordered the concerned parties to iron out the contentious issues within 30 days. After the days elapsed without any progress, the SRC requested for an additional 15 days which were granted. The discussions were not held.

7) In November 2016, the union, under the protection of the constitution (which is above all laws) filed a 21-day notice of a countrywide strike. The notice ended on 4th December 2016. The strike commenced on 5th December 2016 affecting all public health institutions and supported by all doctors irrespective of their workstations.
The CoG went to court to render the strike illegal. The ruling of this second court bears no weight as the Constitution of Kenya protects and gives the right to go on strike once due process is followed.

8. The Union will take NOTHING less than the CBA and the Salaries in the CBA MUST be implemented and Backdated from 1/7/2013. And any talks can only be on how to adjust the Figures for INFLATION and LOSS OF TIME.

The government spokesman Eric Kiraithe is on record saying that Kenya doesn’t need doctors for a man presumed to have functional senses, his utterances dropped jaws. So much nonsense in one joint. The Gov has exhausted all intimidation avenues especially judiciary where arrest threats have been placed on defiant officials to call off The strike.

Comparing the Doctors pay in Kenya to colleagues elsewhere surrounding leaves so much to wonder. Kenya has been experiencing brain drain because of such a similar mistreatment and exploitation of expertise. In Rwanda which has siphoned on Kenya’s doctors, they’re paying well. Gov we’re told has resorted to importing 2000 doctors to be posted to all referral hospitals across the country to attend to emergency cases. The downgrade doctors supposedly being brought in from China. The body language being the government won’t honor the CBA and ready to strangle the healthcare state to death.

Kenyan doctors have the option of taking their services elsewhere where their salaries would go up even more than the 300% they’re demanding, but it’s not the government who’ll suffer but Kenyans. The politicians who fly abroad to treat slap bruises would care less about stable healthcare state in Kenya.

Doctors are human. First, they have families to take care of and bills to pay just like every one of us. When the cost of living goes up, doctors are not exempted so why would we join the Government’s propaganda demonizing doctors for abandoning ‘calling’ in a bid to shut their voices. Calling doesn’t pay bills, good salaries do. The state of healthcare will naturally shine with a motivated doctor. Kenya’s Doctor to patient ratio is so low that the few doctors available are overworked like slaves, and peanut pay is an insult to the injury.

I call upon the Doctors to stand their ground, and they’re blessed with able officials. History will judge you well; you might not succeed today but tomorrow’s breed of doctors will appreciate the struggles you’ve made. The croaks of frog don’t stop the cow from drinking water from the river. Don’t stop pushing for better pay. Kenya somehow will miss money to pay its workers but never miss money for the corrupt officials to loot. Go for nothing short other than Lipa Kama Tender. They can bring in their plastic doctors from China I doubt they’ll stand the horrible working conditions.