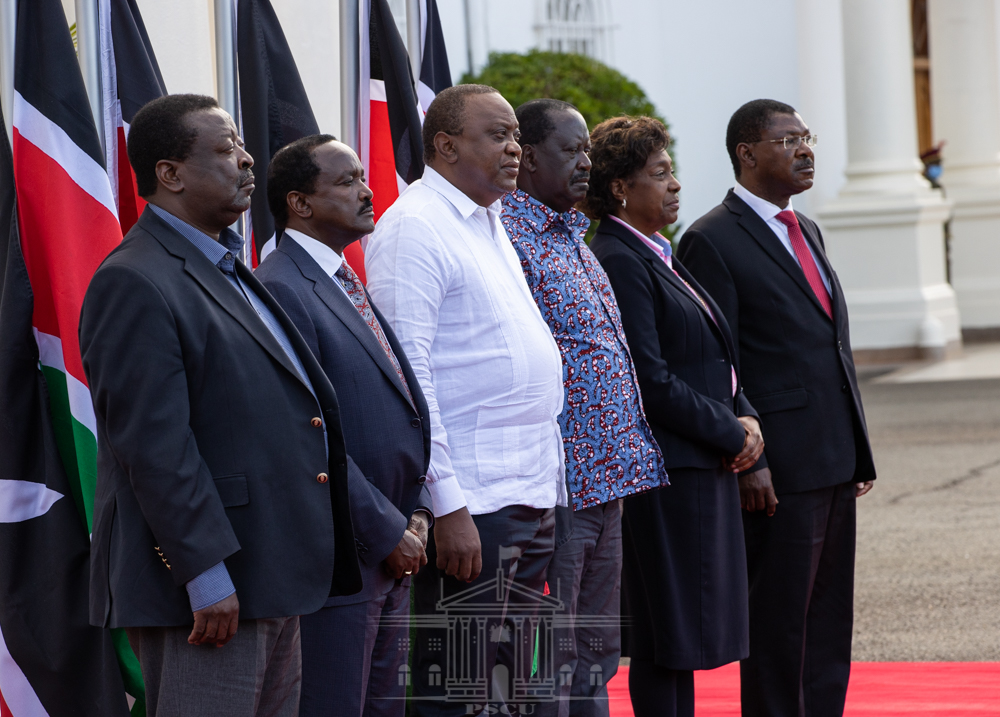 President Uhuru Kenyatta now urges Kenyans to put aside their political differences for the sake of the country’s development.

Speaking after a meeting with leaders who have been championing the cause of the Building Bridges Initiative, the head of state and his political party colleagues made a case for the country to build a greater political consensus for the enduring benefit of the nation.

In an apparent reference to the ongoing debate around the Building Bridges Initiative, the head of state noted that leaders and Kenyans from all walks of life must close ranks, mend their differences and focus on building a better Kenya.

“BBI represents a once-in-a-generation break from the past; to resolve many longstanding national challenges that hold us back from realizing a united and prosperous Kenya for all.” They said in a statement read on their behalf by the KANU leader.

Now that the BBI Bill has been passed by the majority of counties the President says the country must endeavor to pull in the same direction.

“As our County Representatives have shown, now is the moment for all Kenyans to put aside partisan divides and come together to build a better Kenya; for ourselves, our children, and for generations of Kenyans yet to be born.

Speaking after a meeting with political party leaders in statehouse on Thursday, President Kenyatta, alongside the political leaders who have expressed their support for the BBI Initiative expressed “immense gratitude to all our County Assemblies for their monumental support for this Popular Initiative.”

“Their bold action sets the foundation upon which Kenya shall advance inter-generational equity, realize gender parity, guarantee equal opportunities for all, and give each Kenyan a bigger slice of our shared prosperity.” The leaders said in a joint statement.

They all noted that the passage of the BBI Bill in the counties is a demonstration of the faith Kenyans have in the process.

“THUS FAR, 42 County Assemblies have considered the Bill. Their affirming voice has thundered across the Republic, in resonance with the desire of all Kenyans to further strengthen our governance by breaking the cycle of divisive elections, fostering equitable distribution of resources by enhancing the share of revenues to County Governments, and creating a more robust and responsive framework to secure opportunities for all Kenyans including our micro, small and medium enterprises.” They said

Moving forward, they vowed to ensure the voice of every Kenyan is heard disclosing plans to carry out civic education to sensitize the entire Kenyan nation on the opportunities that lie for the country as part of the BBI process.

Referendum has been scheduled for June.