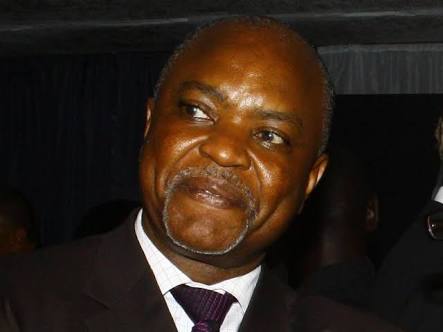 From Monday, one thing has been consistent with the Nation Media Group’s DN. The splashing headlines have been on a roll. Leading writers at Daily Nation; Mutuma Mathiu and John Kamau are the familiar faces in this. In what is a clearly well orchestrated plot to build a narrative and set an agenda, the popular newspaper seem to have been favorited in this ploy. Media enjoys the monopoly of agenda setting. 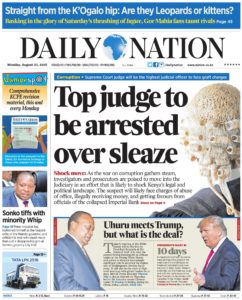 The Monday headline when the narrative started building up.

“A Supreme Court judge faces imminent arrest and prosecution for corruption in a devastating and dramatic escalation of the government’s campaign against graft. The arrest of such a high-ranking judicial staff, unprecedented in Kenya’s history, will be the culmination of weeks of investigations into brazen corruption at the Judiciary, and is likely to send shock waves throughout the institution.” It read.

“The Nation has followed this case for months after it learnt that the judge had been reported by the Kenya Revenue Authority to the Director of Public Prosecutions over the suspicious movement of large sums of money in and out of bank accounts.” The part of six months got me giggling.

They had the fine details of the entire case probably on tips from the DCI or ODPP who were on top of the case. How they got the information is not important what’s key is, they did not only instill fear in the judiciary corridors but at that particular moment they had put entire Supreme Court bench on public trial before the court of public opinion. 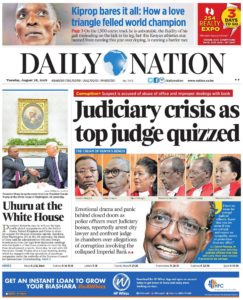 The Tuesday headline full with all judges faces on the front page.

While this might look harmless to a layman’s perspective viewpoint, I find it alarming that entire bench was on the spot, it paints the picture of a corrupt Supreme Court which is not only defaming but undermining authority and legitimacy of the highest court in the land. I don’t know if the editors had that in mind or maybe they did and a narrative had to keep building up.

On the second day running, the public was being prepared for the eminent arrest of the judge and the narrative was being built to paint a totally corrupt judge even when the entire case hadn’t been tabled. It’s called building perceptions, you don’t necessarily need to tell the truth, you can sway opinions with anything that suits your agenda.

On Tuesday, DCJ Philomena Mwilu was arrested within the precinct of the court which again in my view wasn’t the best thing to do as it doesn’t only undermine the authority of the court but also sends intimidating messages to other judges who might now not want to cross paths with the executive.

Mwilu now faces numerous counts of stealing, abuse of office and failure to pay taxes. “The evidence in our possession, reveals that Lady Justice Mwilu abused her office for personal gain; accepted a gift in the form of money in circumstances which undermined public confidence in the integrity of her office (and) conducted herself in disregard of the law,” DPP Noordin Haji said in a statement.

“In view of the above, I have concluded that the evidence is sufficient with a reasonable prospect of conviction and it is in the public interest that criminal proceedings should be preferred,” the DPP concluded.

Wednesday, the Daily Nation was once again at it shouting the fall of the DCJ. 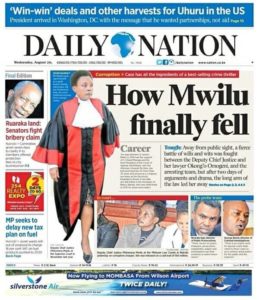 Mwilu finally fell according to the DN

Again, this was not only done in bad faith but part of the narrative to defame the DCJ according to my thinking, look, there’s a presumption in the courts that one is assumed innocent until proven otherwise but here’s Daily Nation smartly executing a case in the courts of public opinion. To me this is character assassination on the person of Mwilu.

The @dailynation allowed itself to be used very badly in the case of DCJ Mwilu. All along the perception created was she was sitting in her office collecting huge bribes in utter disregard of logic and norms. This was false and hugely DECEPTIVE.

The Deputy CJ case by DPP and DCI is serious political witch-hunt. There is evidence that DCI boss personally used Daily Nation's John Kamau and Mutuma Mathiu to prosecute and judge the Deputy CJ without clear evidence. John Kamau of DN is Kinoti's spanner boy.

I find it exposing that the newspaper would overlook the presumptions of the court to prosecute and convict without facts. There are rumors that there’s a succession plan underway since the Chief Justice Maraga is three years shy of his retirement age hence the need to find a favorable replacement. As the DCJ, Mwilu is poised to take over but she is presumed to be a tough nut and system unfriendly, maybe that’s why she need to get out of the way.

David Ndii seems to have an idea on who’s behind Daily Nation’s Headlines. This is not the first time accusations are being thrown at Daily Nation for being a mouthpiece of the state and if it can be proved then it would be unfortunate for such a big scale media house being reduced to a government mouthpiece and a propaganda channel.

NIS. They edit the DN these days.

New Energy Felt As ODPP, DCI And NPS Gets More Active And Engaging On Social Media