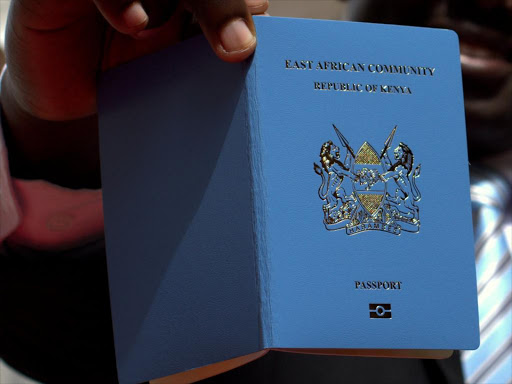 An immigration staffer holds an e-passport at Nyayo House.

A junior immigration official based at Nyayo House has been exposed by a local newspaper for his involvement in issuing referral visas for Somalis by applying double standards while executing his duties.

According to the publication, Wario Abdikadir has been using his connections in the system to lobby for a friendly face to replace the outgoing immigration director Alexander Muteshi. Wario is also said to have been in good books with the outgoing Interior CS Fred Matiang’i who supposedly gave him protection.

Despite holding a junior position, Wario has favored one agent, Abdulrahman Mohammed, to issue visas for applicants engaging in questionable activities in Somalia.

Other agents are blocked over flimsy grounds by Wario as he favors Mohammed. Travel agents who apply for visas are rejected on basis of security clearance.

The publication claims that the cartel has incorporated an intelligence collection agency agents seconded at the Immigration Department to smoothen and level their operations.

NIS officer named was recently transferred and replaced by a lady officer, Mohammed is said to have managed to Compton it the new officer with the initial NIS official’s help.

The publication further claims that Mohammed, the broker agent, held a secret meeting with the agent he commonly refers to as Madam in a meeting that he openly boasted about.

In the meeting, supposedly, a business deal was signed. Mohammed boasted to those who cared to listen that he parted with Sh4M in the deal that supposedly involved Wario.

As a result, other agents who referred others visas online have been locked out with Mohammed having a field day.

Mohammed’s own citizenship is questioned in the dossier. He’s said to be originally from Somalia bought fraudulently acquired Kenyan citizenship.

He operates from Eastleigh if not from Wario’s office in Nyayo House.

The publication claims that, one time, agents bitterly confronted Wario, and raised a series of complaints. Instead, Wario implicated the intelligence agency as being responsible to secure the visas.

What surprised them was the fact that Mohammed afterwards laughed off the matter boasting that he was in bed with the intelligence agency’s agents at Nyayo House, and regularly visits their office based on 24th floor.

For now, agents dealing with Somali visa referral that has the intelligence agency involved cannot access the process due to the cartel of Wario, Mohammed and sleuths stationed at Nyayo House. Genuine agents have blocked from clearing their clients this rendered useless.

Kenya Insights allows guest blogging, if you want to be published on Kenya’s most authoritative and accurate blog, have an expose, news TIPS, story angles, human interest stories, drop us an email on tips.kenyainsights@gmail.com or via Telegram
Related Topics:Nyayo House
Up Next

Part I: Corruption By Nancy Wakarima Karigithu PS Shipping And Maritime At The Kenya High Commission In London