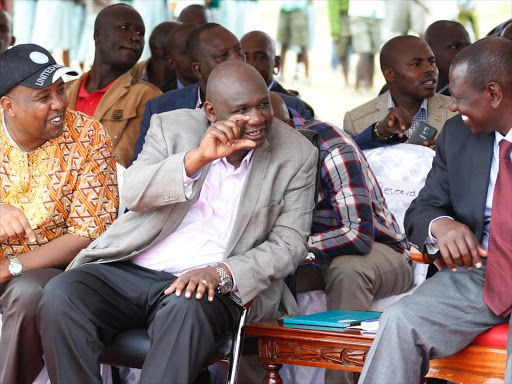 Narok governor Samuel Ole Tunai has been kicked out of the Deputy President William Ruto‘s camp after the latter endorsed Patrick ole Ntutu to fly the hustler’s flag in 2022 gubernatorial race. Ntutu who is currently serving as the chief administrative secretary in the ministry of Labour does not see-eye- to eye with the governor.

Tunai is serving his final term that he defended on a Jubilee ticket in the 2017 elections after defeating the same Ntutu who vied on Chama Cha Mashinani and got some 93,628 votes.

The governor was DP Ruto’s point man in the region but is now skipping his events including a fundraiser in aid of Maranatha Church at Enoosaen Girls School in Kilgoris constituency where Ruto was the chief guest. 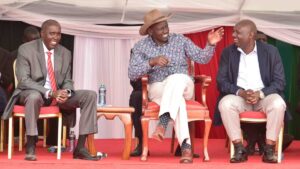 The governor began sending mixed signals to the Tangtanga camp when he became a member of the BBI campaign team when he was expected to lead the Maasai community in rejecting the Building Bridges Initiative.

He failed to show up when Baringo Senator Gideon Moi who is Ruto’s rival was in Narok to drum up support for the document but he shocked everyone when he attended the launch of the BBI signature collection drive at KICC, an event that was presided over by President Uhuru Kenyatta and ODM leader Raila Odinga but skipped by DP Ruto.

Related Content:  OPINION: Why Prof.Kagwanja Is Wrong On William Ruto And The Deep State

Governor Tunai felt disrespected when the Deputy President endorsed Ntutu during the burial of his mother, Nalangu Ntutu without consulting him. The vocal Ruto also purported that issues between the Tunai and Ntutu had been ironed out as he praised the CAS for unifying and developing Narok county.

The DP even assured the mourners that Tunai will hand over the leadership to the former Narok West MP as he continues to position gubernatorial candidates in his Rift Valley backyard ahead of next year’s general elections.

Tunai worked as a National Intelligence Service officer till he was elected as the first governor of Narok on United Republican Party ticket in 2013. He now remains a die hard follower of Kieleweke where he can be promised a parastatal job should they form the next government.

Kenya Insights allows guest blogging, if you want to be published on Kenya’s most authoritative and accurate blog, have an expose, news TIPS, story angles, human interest stories, drop us an email on [email protected] or via Telegram
Related Topics:DP William RutoNarok CountyNarok governor Samuel Ole TunaiTangatanga
Up Next