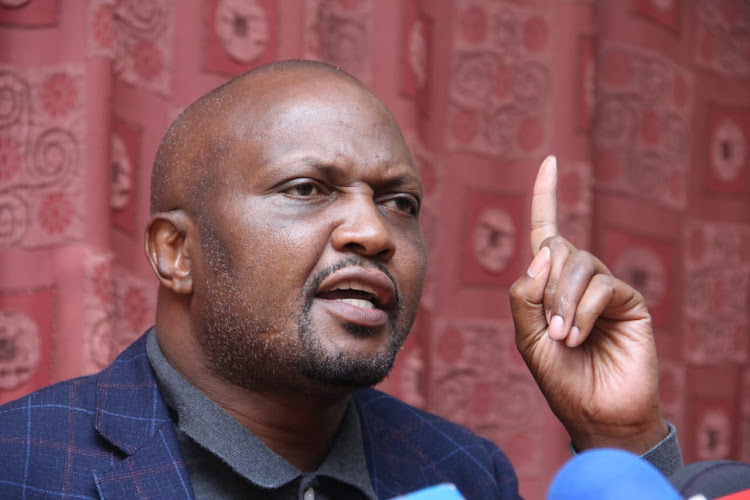 Gatundu South MP Moses Kuria says it’s over for him and Jubilee, has reduced engagements with Ruto but still supports him.

This, days after endorsing Martha Karua as the best candidate for Deputy President citing her political CV.

In an interview with Citizen TV on Sunday, the Gatundu lawmaker said that he had been reduced to a public political commentator, adding that he had not picked a side yet.

“It is over for me and Jubilee. I will walk away from it officially on February 9 next year. For now, I am focused on helping people win elections,” Kuria said.

However, he curiously added that he would prefer working with Deputy President William Ruto (his longtime political friend), but he says the circumstances cannot allow him.

“William Ruto is my friend, we have suffered together. Do you know I was removed as vice-chair of the National Assembly’s Transport committee because of my association with Ruto?” he said.

“People who work with Ruto have been seen as opposition for a very long time. Do you know that I was also removed as a member of the Budget and Appropriations committee? Why? Because I am a friend of DP Ruto,” he said.

He however clarified that his reduced engagement had to do with the fact that joining United Democratic Alliance (UDA) entails abandoning his infant party Chama Cha Kazi (CCK).

“I hope for an opportunity to work with him (Deputy President) in future,” he said.

“I am not boarding in terms of folding parties. It has been tested and it failed terribly. Forming one party does not end well,” Kuria told Citizen TV.

Barely a fortnight ago, Kuria caused a stir online when he posted an opinion poll courtesy of his Chama cha Kazi party with projections of a two-horse race in the 2022 General Election.

Kenya Insights allows guest blogging, if you want to be published on Kenya’s most authoritative and accurate blog, have an expose, news TIPS, story angles, human interest stories, drop us an email on [email protected] or via Telegram
Related Topics:DP William RutoMoses Kuria
Up Next

Did Joho use and dump Luos after re-election?