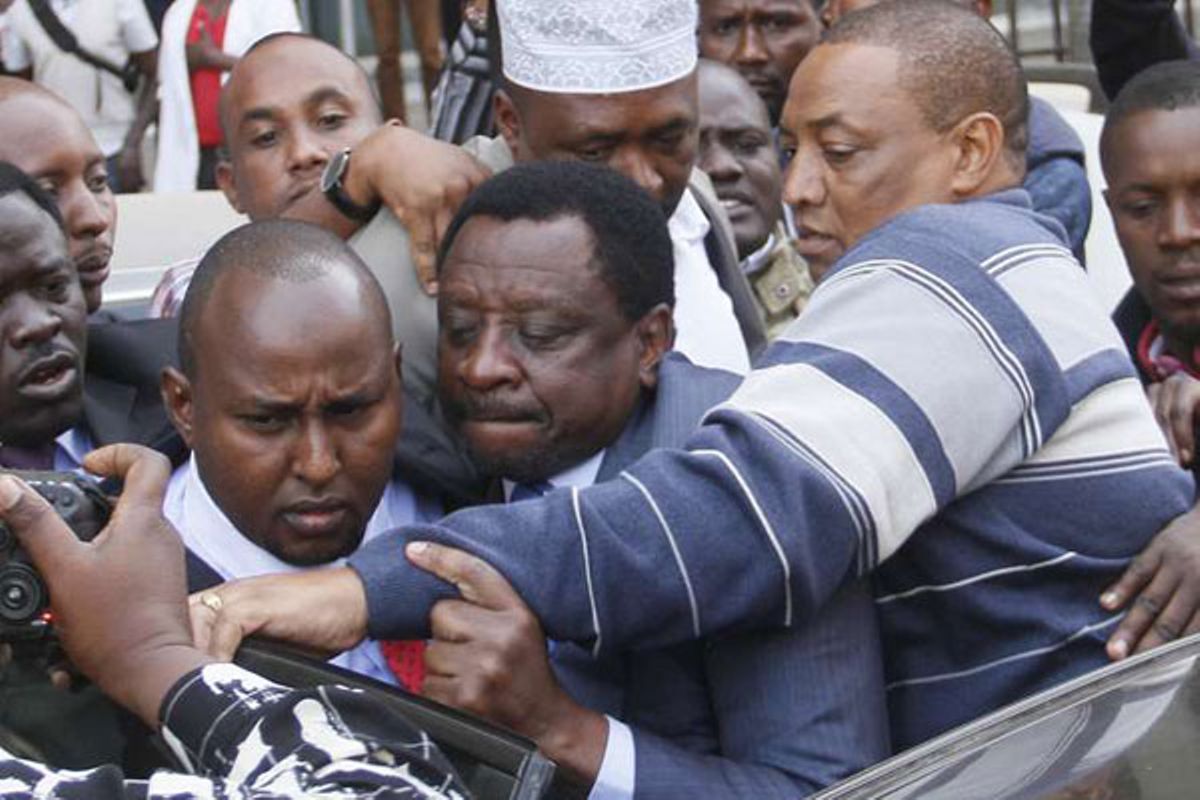 Bitter war has exploded between Siaya SenatorJames Orengo and Suna East MP Mohammed Junet who are both sycophantic supporters of ODM leader Raila Odinga who is planning to give a fifth stab at presidency. Orengo has not been happy with Junet who is now Odinga’s most trusted follower since the much hyped ‘Handshake’ between the ODM leader and President Uhuru Kenyatta in 2018 where Junet accompanied Mr Odinga while Orengo was left in the darkness. In 2008 Orengo was Raila’s aide and wwas instrumental during the formation of grand coalition government with President Mwai Kibaki.

But  Orengo’s growing jealousy was later made serious after the loudmouth Junet made a loose remark during a Odinga’s campaign tour in Kisii where he said that Kikuyus will be treated like outsiders in Odinga’s government. The unwarranted comment pushed Orengo to hire goons and  local  MCAs to heckle the Suna East lawmaker who was to accompany Odinga to a similar rally in Kisumu but he skipped after getting the wind of Orengo’s dirty schemes. The senator wanted Kisumu youths to demand that Raila drops Junet from his campaign team.

Junet’s closer relationship with Raila Odinga also saw him being chosen to co-chair the Building Bridges Initiative secretariat with former Dagoretti South MP Dennis Waweru who represented Uhuru/Kieleweke wing making it apparent that Odinga trusts Junet over Luo politicians. That favoritism has made him an enemy of irrelevant Luo politicians led by Senator James Orengo who is leading a cocoon of Luo politicians in ODM are now claiming that their tribal party has been taken hostage by outsiders.

ODM’s  two deputy leaders are governors Hassan Joho of Mombasa County and Wycliffe Oparanya of Kakamega County, the secretary general is Edwin Sifuna who hails from Bungoma County but Junet has pocketed a couple of Luo politicians like Omondi Gwonyo to spy around other Luo politicians and report back to him.

Orengo is leading the same clique that accused Odinga and Junet of falling for a raw deal on the distribution of the 70 constituencies in the collapsed BBI that were designed to benefit the Mt. Kenya region. He also led a section of Nyanza politicians including Otiende Amollo (Rarieda), Samuel Atand and Aduma Owuor (Nyakach) who campaigned against the BBI document across Nyanza region arguing that Luos were being shortchanged through BBI.

Gwonyo noted that when the BBI collapsed at the Court of Appeal Senator Orengo and his team celebrated their vindication as they placed Junet on the chopping board for ‘finishing’ Raila.

Kenya Insights allows guest blogging, if you want to be published on Kenya’s most authoritative and accurate blog, have an expose, news TIPS, story angles, human interest stories, drop us an email on [email protected] or via Telegram
Related Topics:General Election 2022James OrengoJunet MohamedODM party
Up Next

Moses Kuria: Why I Have To Cut Off Links With Ruto For Now