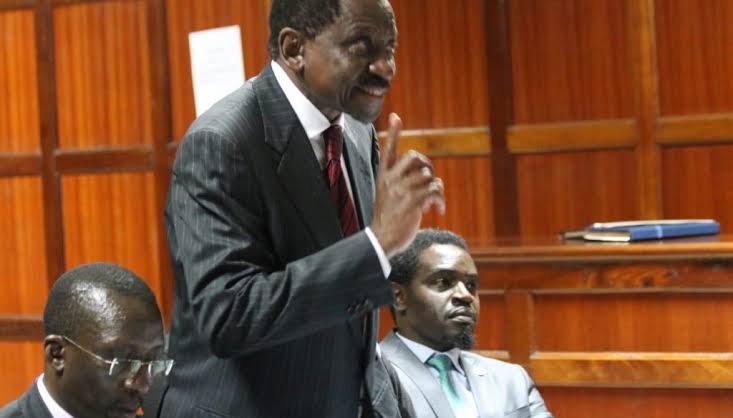 Circumstances surrounding the death of Mr. Oyugi who was hurriedly buried in Siaya continues to draw numerous reactions from across the board.

The manner in which the body was handled has irked so many describing the burial which was done in a body bag and on a shallow grave as inhuman and lack of dignity to human life.

While the county government continues to distance themselves from the cruelty, the governor Rasanga has initiated a committee to investigate the circumstances surrounding the death.

Family of the late led by the brother Mr. Onyango is on record having spoken to a local radio station in Nyanza saying that the family was excluded from the burial arrangements. The family insists they had already started making the coffin for the burial on Sunday daytime but were shocked to see the government bury him in a body bag early in the morning of Sunday.

Senator Orengo who also happens to be the area committee is now taking everything to the next level in a bid to find justice for the family who’re asking for the tests results to ascertain the cause of the death, they’re also questioning as to why a postmortem was not conducted on the body.

Orengo has issued a statement that he’ll be requiring the CS Mutahi to offer a comprehensive report on his death. Orengo in the same context has hinted on the possibility of a legal dispute in the death by instructing his lawyer who’s also the LSK Chairman Nelson Havi to take up the case.

Below is the statement from the Senator.

WE MUST HONOR THE DEAD

Human dignity does not end with death. In all cultures across the world the burial of the dead is a solemn event accompanied with elaborate rituals. We must respect the dead and that is why we have graves, tombs, crypts, mausoleums and pyramids. Veneration of the dead is based on love, respect and dignity for the deceased. Even the dead in major wars and civil strife have their remains interred in cemeteries.

James Oyugi’s burial in Simur Village, Ukwala location, Ugenya Constituency, Siaya County has created justifiably a national outrage. The crude and macabre burial in the dead of the night with little concern for the grieving family and the community has no place in a caring and decent society.

We want everybody to stay healthy and safe but not to the extend of flouting or ignoring protocols laid out by the government; respecting the dignity of the dead, their cultural and religious traditions and customs and the need to offer comfort and solace to grieving families.

If James Oyugi’s death was caused by COVID-19 then the conduct of the burial caused more harm than good and may have endangered other lives. COVID-19 pandemic is better fought without stigma. The Corona virus has invaded the corridors of power and royalty. Even the height of aristocracy and the celebrity world have not been spared by this invisible enemy and contagion.

I am also instructing Nelson Havi & Company Advocates to take up the matter for any necessary legal action.

How To Bury People Who Die From Coronavirus According To WHO