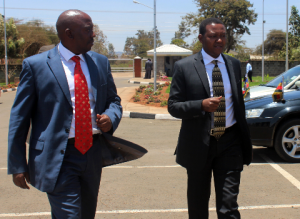 By Nicholas Olambo
With the new constitution came the devolution that created the governor position to head counties. Each governor appoints his deputy before presenting their documents to IEBC, the duo are then elected as a team to lead the county governments. The journey was all rosy till elections but immediately they got into office the ugly head of dirty politics came out. Somewhere along the way as senators began lining up to challenge their respective governors in the coming polls, deputy governors are also proving potential threats to the governors’ crowns.

The working relationship in a number of counties has been severely strained. Machakos governor Dr Alfred Mutua and his deputy Bernard Kyala are friends turned foes. Mutua has accused his deputy of working closely with his enemies, Senator Johnson Muthama and other Mps from the region. ‘My deputy is a traitor who is working with my enemies to plot my impeachment so that he can complete the remainder of my term’ Mutua said. The inverse is the case though; Governor Mutua has been accused of frustrating and ‘impeaching’ his deputy, locking his office, denying him his official car and having him not covered under the medical insurance package.

Kyala has since declared running against Mutua in the 2017 elections straining their relationship further. Mutual, a PR and communications expert on the other hand claims that Mr. Kyala is just a lazy individual who cannot keep up to his stamina. He brags of single handedly improving the state of roads and sinking more boreholes than any other Kamba leader since time immemorial and through his Maendeleo Chap Chap Movement he is destined to do more. Mutua ignores the ailing health sector in Machakos as a normal problem experienced in many counties across the country.

Kyala has since declared running against Mutua in the 2017 elections straining their relationship further. Mutual, a PR and communications expert on the other hand claims that Mr. Kyala is just a lazy individual who cannot keep up to his stamina. He brags of single handedly improving the state of roads and sinking more boreholes than any other Kamba leader since time immemorial and through his Maendeleo Chap Chap Movement he is destined to do more. Mutua ignores the ailing health sector in Machakos as a normal problem experienced in many counties across the country.

When its all clear that governors are selfish and their deputies are greedy, Mutua says he just did not have enough time to choose a good deputy before elections and instead blames his woes on the leadership of Wiper Party. He says the Former Vice President Kalonzo Musyoka is jelous of ‘positive attention’ he is getting through his development projects because he led the community for three decades and did nothing. He further denies allegations that he has quit wiper party saying he is a card holding member.

His comments on Kalonzo can be ignored; The PR governor has history of belittling people including respectable global leaders. When he was the government spokesman in the Kibaki administration, Mutua referred to President Barrack Obama the then senator of Illinois as a small guy who was coming to traverse our beautiful country polluting the air. Obama then rose to be the president of the most powerful country on earth, United States of America when Mutua is still a governor who can’t even lead his deputy. Can he lead the people? Leadership is a team work; Mutua is not getting along with his deputy, Senator and the Women rep.

If he seriously means the kind of development he is bragging of, why should he stay in a party whose leadership has been his obstruction to proper development? He denies allegations that Maendeleo Chap Chap is a party but a movement that is open anyone who shares in his development ideology to join for the good of the people. The truth is Maendeleo Chapa Chap is party whose launch at the Bomas was poorly attended making it difficult for the poor governor to use as his re-election vehicle.

In Kisumu the situation is not any different. The governor and the deputy don’t see eye to eye. This is what you get when you force two strange fellows to bed; the governor and his deputy are odd couples who were brought together to avoid party friction towards the 2013 polls. Both were eyeing the gubernatorial post through the same party, ODM, but the deputy was asked by the party chiefs to shelve her ambitions and deputize Hon. Jack Ranguma. The case of occupants of both offices not relating well has also been witnessed in Kwale, Bungoma and somehow in Nairobi.

At some point there were whispers that the relationship between Nairobi governor and his deputy Jonathan Mueke was weakening. Mueke denied the allegations even as Machakos governor said on a national television that the case in Machakos is the same in Nairobi. He also added that Mueke had considered running against Kidero at some point but he was smart. He realized that Kidero is too strong to beat and with deep pockets. His candidature against Kidero is not viable; he has no choice but to deputize him.

With the poor rapport many Kenyans can be of the option that the deputy position be abolished but I think it’s the selection criteria that should be opened for debate. When Mutua says that the governor does 98% of the work and the governor should fire and hire their deputies, I think the roles of the deputy should be entrenched in the law so that individuals cannot lock a public office and stop an elected leader from carrying out his duties.

Related Content:  GoK might be forced to Recall medical students to the hospitals soon.
Kenya Insights allows guest blogging, if you want to be published on Kenya’s most authoritative and accurate blog, have an expose, news TIPS, story angles, human interest stories, drop us an email on [email protected] or via Telegram
Related Topics:Nicholas OlamboOpinionPolitics
Up Next

Hypocrisy: Cold Treatment From Media As Kenyan Athletes Shine In The Rio Paralympics