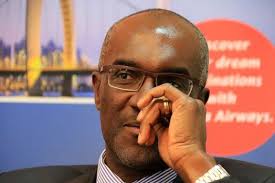 By Nicholas Olambo
Kenya Airways Chief Executive Officer and Managing Director Mbuvi Ngunze has announced that he will retire in the first quarter of 2017. Ngunze who joined the airline in June 2014 has been facing a solid push from the Kenya Airline Pilots Association for his dismal performance. The association was also pushed for riddance of his incompetent team and former Chairman Dennis Awori.

Awori resigned in October before the half year performance updates, and his position has since been taken by the former Safaricom boss Michael Joseph. Mr. Joseph welcomed Ngunze’s resignation with respect and promised to have his successor in the next three months alongside the board and the nominations committee.

The loss-making airline faced several hitches and forced flight delays that Ngunze’s incompetent team could not fix. The soft-spoken Exec has nothing to the right home; he was brought in to save a collapsing giant airline, but he failed terribly to get the airline from its financial woes. But was the problem Ngunze or his management skills?

I doubt if you ask me. African governments got it all wrong after kicking out their colonial masters. Nearly every African nation was left was with a railway line that they failed to manage or improve by building even an inch after several decades. We kicked out white settlers, reclaimed our lands but used them to produce what we don’t consume.

Every African government got into the airline business, making massive losses and using taxpayer’s money to bail out these airlines that continue to make more losses. Heads must roll, it’s the same poor management disease that brought that railway to its knees that is now killing the airline.

KQ has been in the death bed for a minute, and signs of recovery are not visible. Appointing Michael Joseph to chair the board and kicking out stressed Ngunze are not enough. The airline sold its milk cow, Boeing 777 and called it a good move. It also sold its coveted prime landing slot to Oman Air for Shs. 7.5 billion in March and its still stuck in its financial crisis. A complete turnaround is necessary.