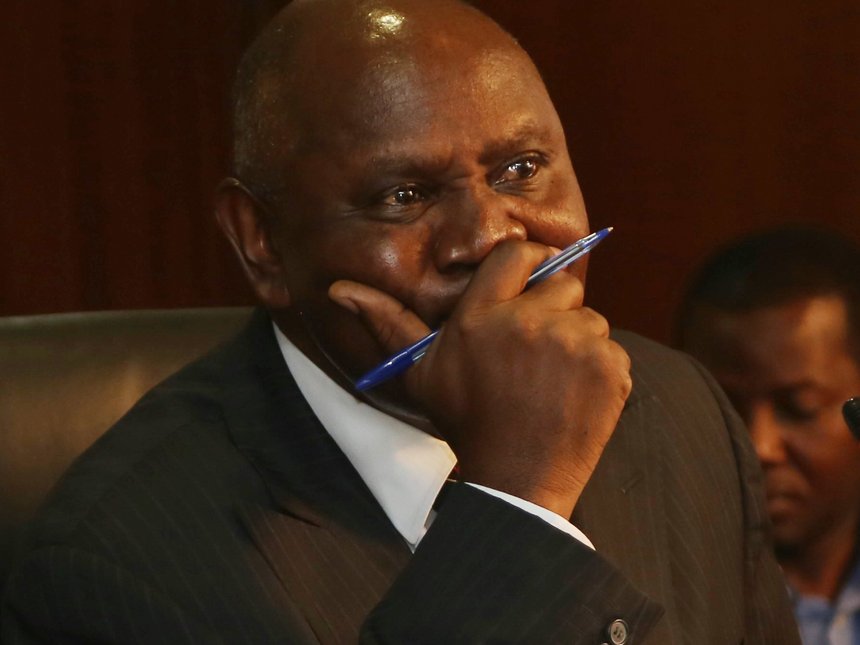 In 2010 new constitution, Auditor General’s office was delegated into two wings: Controller of the Budget(Active during funds allocation) and Auditor General (Audits after Use).

The Auditor-General shall audit and report, in respect of that financial year, on:-

°The Auditor-General may audit and report on the accounts of any entity that is funded from public funds.
°An audit report shall confirm whether or not public money has been applied lawfully and in an effective way.
°Audit reports shall be submitted to Parliament or the relevant county assembly.
°Within three months after receiving an audit report, Parliament or the county assembly shall debate and consider the report and take appropriate action.

Article 226, Section 4 provides for the accounts of Office of the Auditor General to be audited and reported on by a professionally qualified accountant appointed by the National Assembly.

The commissions and the holders of independent offices–

13 (1) The Commission shall have all powers generally necessary for the execution of its functions under the Constitution, this Act, and any other written law.

(2) Without prejudice to the generality of subsection (1), the Commission shall have the power to –

Special Audit Reports that Have threatened Ouko’s Stay in office.

1.The Audit report that unmasks 17 ministries and departments spent a total of Sh66.7 billion in the fiscal year 2013/14 without availing any documents to authenticate how the money was used.

Related Content:  With Speaker Justin Muturi And Aden Duale In Parliament, Kenya Is Yet To See The Worst From The Eccentrics

The amount was part of a total of Sh450 billion in unsupported expenditures in the public sector, underlining the lack of rigour in accounting for taxpayers’ money.

Thereafter President’s Chief of Staff Mr.Kinyua came with a coronation directive “The Auditor-General’s reports shall be availed to ministries at least seven days before tabling in Parliament,”Contrary to the constitution which requires audit of Public funds to be reported to parliament or the relevant County assemblies, which have the mandate to interrogate the reports and take appropriate actions. It was also suspicious as to why these would be presented to ministries when the same ministries to be presented to are the ones under scrutiny.

Emmanuel Mwagoah, the petitioner who was seeking removal of Auditor General Edward Ouko

3.Eurobond Saga–When The Auditor General Ouko declared that Sh215 billion from Kenya’s controversial Eurobond funds had not been accounted for, two years after the Government claimed the cash was allocated to ministries.

Thereafter, Investigations by Parliament revealed that the Government did not deposit the Eurobond proceeds in the Consolidated account, as required by law, but instead had first put the money in offshore accounts.

For accountability, Treasury said it transferred Ksh34 billion from the Ksh215 billion that was sitting in the offshore account to the Exchequer Account to fund infrastructure projects.

On the same day, July 3, 2014, another amount of Sh53.2 billion was withdrawn from the offshore account to pay a syndicate loan. Game of tik tak that at the end exposed them guilty.

4.Health Ministry Ksh5B Saga(Afya House Scandal)–The probe was triggered after a leaked audit by the ministry’s internal auditor Bernard Muchere revealed billions of shillings were lost through irregular payments. Surprisingly, the investigations by the Auditor General came after a delayed probe by the Ethics and Anti-Corruption Commission. Their delay was on a mission for monkey business since one of the entity that was involved was Philip Kinisu who was former Ethics and Anti-Corruption Commission Chairman. Again these tik taks led to USAID withdrawal from funding Health Ministry as they used to and so was many other shareholders.

5.In this month of December solely, below are mega Audit Reports that precisely insights on unaccounted public funds hence can be considered stolen:

1. Interior Ministry-Ksh8,600,000,000 Unaccounted. Despite the expenditure scrutiny is exempted by the constitution, it’s unlawful to scrutinize this office but this has led to officials taking advantage to squander and launder money.

5.Police VIP Copter bought–2,300,000,000 Government argued that the purchase was classified when Auditor requested for supporting documents for the purchase.

6.Ministry Of Immigration Ksh1.5B theft–this occurred last year 2016 when immigration ministry was only able to account for Ksh1.4B Passports and stickers revenue but couldn’t for Ksh1.5B Visa revenue in the Ksh2.9B Total revenue that was collected.

7.Ministry of Tourism Ksh 390M theft– Came to spotlight early March this year 2017. He argued, there was likelihood that revenue collected were being deleted from the system and later withdrawn in cash unauthoritatively. “The system could not also distinguish a late payment with an arrears payment as it applied penalties to both. This meant that levy department has to call back and confirm the payment and manually make corrections,” as quoted by Businessdaily

In EACC, Recovered assets sums upto only Kshs9.7B since its Establishment. This year, it has been running battles with traffic police and puppetry political witch-hunt on Governor Hassan Joho over his Academic credentials which bow no fruits.

I have been Comparing and Contrasting between Ethics and Anti-Corruption Commission(EACC) and Auditor General’s office obligations and mandates, achievements and failures. I had to take this to a take a new twist by running a poll on twitter and also views from various communication platforms and the message was solid, precise and clear: EACC had the least public trust with witnessed peanut achievements that haven’t convinced the majority tax payers of their relevancy and more importantly their hardwork. 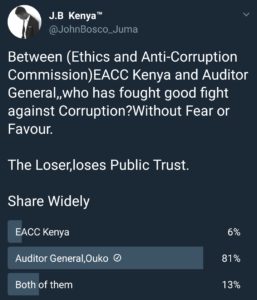 Therefore my take and wish is on empowerment of Auditor General by giving him more mandate to Prosecute Public fund coffers considering the fact that Procurement, Bribery are the most common on a measurement of 70% mode of Corruption in Kenya. Auditor queries Misappropriated funds, forwards to the parliament who intern might direct EACC who has the power to prosecute corruption perpetrators. EACC has been too mean and ineffective in response these matters. I have come to observe, Big-man syndrome between the two entities(Auditor General and EACC) who basically are on duty to curbing Corruption menace in this country. EACC wants to be first runners in unmasking these schemes and so is Auditor General’s office. The litmus test is simple, EACC is more compromised with Cartels and has lost its independence as a Commission. Controversial interlect Dr.PLO Lumumba was once the captain of the Commission, he thought he would be the game changer,he thought he was the strongest of all, he thought he would be the new dawn, he was brought down to earth the same people, among them cartels who fixed him inn. Auditor General has given Cartels sleepless nights, including Uhuru Kenyatta who wanted him out of office sometimes back last year.

Related Content:  What Next After the Hashtags and Demos, We Must Appease the Spirits Of The Murdered

Lately, during EACC seminar, Chairperson Rev.Eliud Wabukala opted for more empowerment for the Commission to work better. I wondered for what motive when Auditor General lacks this power to prosecute perpetrators but works better than he who has. EACC is just a brand, Cartels public institution in the name of a Commission to launder money in a Godly manner from ‘Clean hands’. Those who are left to prosecute after Audit report are tabled in parliament are the same entities in one way or the other involved in these schemes. Don’t expect much.

AG eyes to open offices in every county for oversight mission that worries EACC as they’re going to be outshined and overshadowed.

Soon Ethics and Anti-Corruption Commission(EACC) will launch an online public portal to display their Achievement like #GoKDelivers on a mission to convince the public.

So called State graft watchdog, the Ethics and Anti-Corruption Commission, since stated that the Ksh215B Eurobond whose whereabouts were yet to be explained was not stolen while Auditor General report maintained that it was illegal for the Government to deposit any of the funds in the off-shore accounts and above all the government has no documentation Receipt of Expenditure’ to account for the funds hence considered theft act.

EACC CEO Halekye Waqo recommended Eurobond file to be closed due to lack of adequate evidence at a time when state was witch-hunting Edward Ouko for Arbitrary Abuse of office allegations for he was not sparing any Dick and Harry.

Kenya Insights allows guest blogging, if you want to be published on Kenya’s most authoritative and accurate blog, have an expose, news TIPS, story angles, human interest stories, drop us an email on tips.kenyainsights@gmail.com or via Telegram
Related Topics:CorruptionOpinion
Up Next