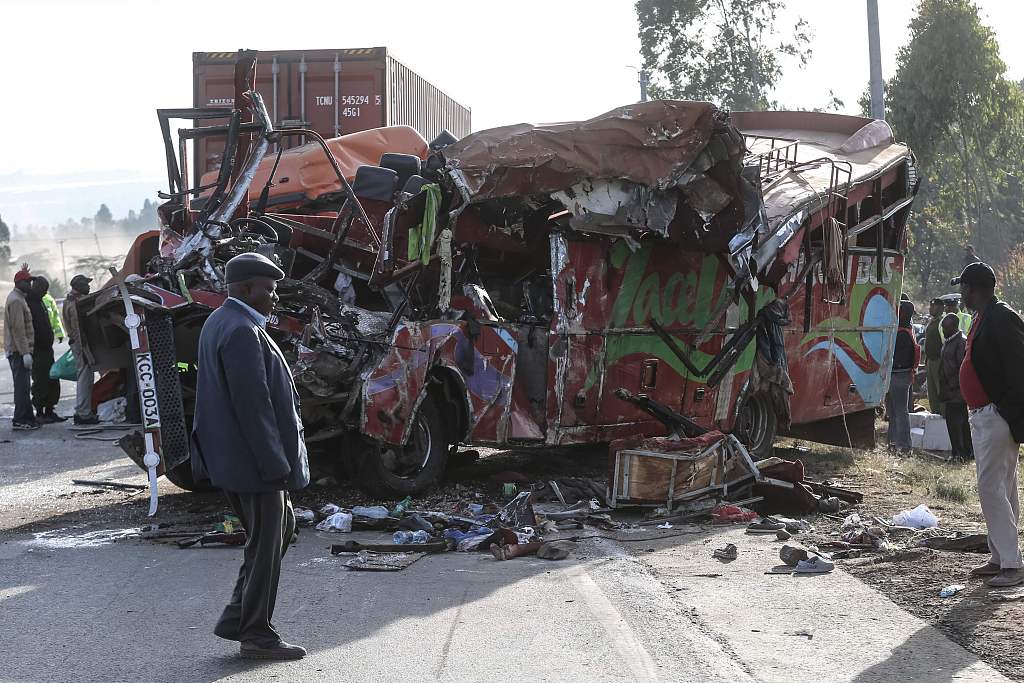 A man walks past Matunda Bus that crashed with a truck killing 36 people at Migaa.

December has been a black month for Kenya, according to available statistics, at least 250 were killed across the country in series of road accidents. So serious the cases got that considerations have been out to make road carnage a national disaster. The last time Kenya lost so many people of that magnitude was during Garissa University terror attack where about 147 students were slaughtered by Al Shabaab terrorists.

On the 30th at Migaa along the dreaded Salgaa hotspot, a crash between a truck and Bus would leave 36 people including truck driver lost their lives in a head-on collision accident. The road and hotspot have claimed so many lives in the last weeks but it was the Migaa’s incident that caused a major uproar online. As usual, games of shifting blames took precedence with the authorities finding a shield in blaming reckless driving as the core cause of accidents in that road, on the other end, public pointed fingers at the authorities even demanding for NTSA to be disbanded as it underperformed on its mandate.

Numerous surveys have been conducted on the fatal road with a double carriage being proposed as the road needs redesigning. Most drivers using that route Eldoret-Nairobi are a special kind who gives zero regards to human lives, overtaking and driving wrong sides at devil’s speed. Migaa’s accident shows the driver of the bus was you going at high speed while making a blind overtake and that’s how it went head-on with the truck killing dozens instantly.

Most of the drivers operate with maximum impunity, this fuels reckless driving hence putting passengers lives at risk. Breaking traffic laws has been normalized given the fact that it is not punishable. Corruption is primarily the catalyst in the road impunity exhibited, often you’ll see drivers pulling dangerous moves with zero regards to traffic laws. After all, if they’re unfortunate to be caught by police or NTSA, a small bribe will put the matter to rest.

Related Content:  A Bright Career Killed, Willis Raburu From a Great Journalist to a Socialites Promoter

As long as NTSA will be seen and operate as an extortion racket rather than policy enforcement body then we’re likely to undergo cycles of the same scenarios. An accident occurs, a knee-jerk directive given, soon forgotten and operations back to normal until the next set of deaths.

About 80% of accidents are blamed on drivers whose road impunity is directly linked to soft policy enforcement grounds laid by bribe living NTSA and the police. If NTSA was genuinely tough on enforcing their regulations and emphasize road safety as opposed to prioritizing fines and bribes. It doesn’t make sense when for example NTSA officials hide in the bush with speed monitoring gadgets to nab those overspeeding.

Ordinarily, the speed cameras are openly placed with clear signs, in this case, the driver is forewarned and knows he’s under watch. Hiding in the bush with the machine only means preying on speeding cars for fines rather than instilling speed discipline. Reckless driving is almost inconsequential in Kenya, drivers care less knowing they’ll still have their licenses and back to the road. 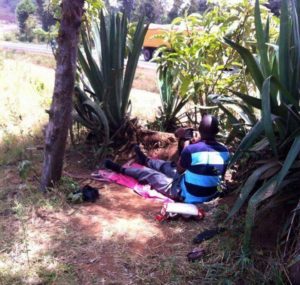 NTSA official at his hideout with the speed monitoring machine.

NTSA has a database of all Saccos and drivers, what we need to do is having a no-nonsense approach in instilling these rules. In the case of PSVs, NTSA can be as ruthless as not only blacklisting reckless drivers blocking them from getting employed elsewhere but also suspending their licenses and in worst cases revoke the license. The moment breaking any traffic law including blind overtaking, overspeeding, overloading is seen to be consequential then the discipline of drivers will automatically take precedence. So far, we can write and talk but much won’t change the only punishment for breaking a traffic rule is dropping 50bob note on the ground while passing the roadblock.

NTSA need to seriously consider being precautionary instead of reactionary, most the quick interventions have been more of ridiculous. However, this is tactfully done to shift the focus from their incompetence, escapism is charming in their doctrine. Inter estate busses were as well authorized to do long distance travels, these Githurai-CBD bound busses don’t have the licenses to do long distances but they were allowed obviously on bribery grounds. With inexperienced and unfamiliar with the roads drivers, they killed many and just I most cases, NTSA feigned license revoke and the busses went back to normal routes. 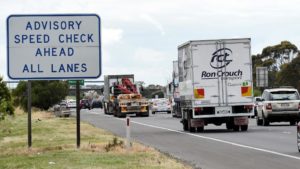 How things are done in right systems, road signs warning on speed cameras.

In a nutshell, it is a collective responsibility for the driver, passengers, authorities to ensure lives are safe on the road but it is the ultimate mandate of NTSA, police to ensure the roads are safe, vehicles roadworthy, traffic rules are adhered to. If there’s a failure then the backstops somewhere and that’s NTSA.

Have the speed cameras placed and catch the rogue drivers easily, basic traffic rules like seatbelts(when was even the last time you used or saw one) speed governors need to be adhered to. Point I’m pressing on is, NTSA can save more lives of they focus on key mandates instead of doing things the wrong way as now. The last I checked the board composition of NTSA, it was rather disappointing and pointed as to why they pop up with some weird directives. A board without engineers and road experts instead businessmen, you can can’t expect much really.

If the PSVs drivers, NTSA, and police public love affair persist then we can keep talking like a mortician to his clients, we can continue administering malarial treatment on an infected wound; waste of time. It should be seen effective if the directives minimises accidents though that hasn’t been the case in recent times, otherwise, NTSA can give daily directives that if they don’t enforce, it will only be clear that some directives are only given to broaden the bribery, fine surface.

Kenya Insights allows guest blogging, if you want to be published on Kenya’s most authoritative and accurate blog, have an expose, news TIPS, story angles, human interest stories, drop us an email on tips.kenyainsights@gmail.com or via Telegram
Related Topics:NTSAOpinion
Up Next

Trump Is Regrettably Right, Africa Is A Shithole