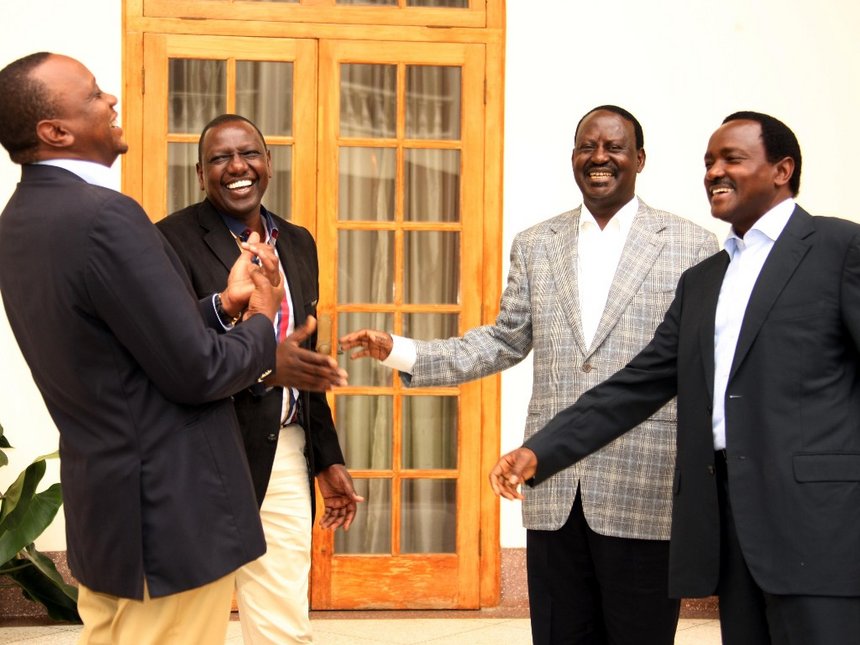 President Uhuru, DP Ruto, Raila and kalonzo sharing a light moment when both met at Statehouse

I choose a side in political warfare to defend at the expense of paralysis rapidly spreading deactivating our nervous system due to spinal cord injury as a claimed Democratic Nation, I gain nothing at all but instead loose more.I decide to water-down the frolicsome and crooked men in black suits, it’s a sure bet of dragging this better placed Nation to the wild and stray dogs.

At the best interest of harmless citizens and true patriots in tattoos, indirectly manipulated low-class families.If we were at the most stable state of the economy with a well-functioning government and appreciating Opposition brigade, we would not rely on relief food and aids, nobody would strategize to be culprits of vandalizing the recently launched Standard Gauge Railway(SGR).One only thinks of such due to Unemployement, Extreme Poverty to earn a living.

Hypocrisy and Propaganda are Self-defeating. Disagree to manipulation to be laid low like an envelope a sign of being loyal to a fellow homo sapien, only be loyal to God.Political slavery by three Ethnic-based men has reduced us to the level of an ID-mindset human being brain without well functioning Ego and SuperEgo.We have cocooned ourselves repelling new adventures and have our eyes and ears both closed and blocked to boycott exposure and new political narratives.

We are still dwelling in ‘Thorax’ politicking,’Payback’,’If it were not him’, ‘Support Our Own’ tribal politics displacing new narrators with savior ideologies. Politics is a dirty game? yes! It’s a game of ideas and strategies? yes! but ever since independence which incumbent have taken us to enjoy the wine in that rich land they promise on a righteous path? My grandmother and grandfather back at the village doesn’t vote in a leader because it’s a dirty game neither do they because he/she is a youth nor an adult but because they want to have a sweeter ending, get pensions without delay and being shortchanged.

Related Content:  This Man Governor Joho And The Rich Muslim Voting Block , What Worries Statehouse Most

But why? “We defend our own” “It’s Payback Time”.What if we get rid of these three Captains? I bet music tunes and the temperament will change for a better and prosperous Kenya.Also moles of these three Captains in the recently shortlisted 18 Presidential candidates which are making a mockery of Democracy needs to be marked Boldly.Joseph William Nthiga Nyagah, Cyrus Jirongo needs not breath the victory air as they are just the opposite side of the same coin.”Show me your friends, I will tell you who you are”.

During 2007 highly contested Presidential race which bred Post-election violence, Joseph Nyagah was among the ODM party Pentagon which consisted of NAJIB BALALA, RAILA ODINGA, WILLIAM RUTO and MUSALIA MUDAVADI.Cyrus Jirongo in 2013 worked closely with Raila Odinga since he was backing up his (Raila) Presidential bid after he hopped out of the Presidential race to battle Dr.Bonni Khalwale in Kakamega Senatorial Seat that he mercilessly lost.

“I would rather vote for any candidate from Jubilee Party but neither Uhuru Kenyatta nor William Ruto”-Otieno, Wafula

However much these three Kingpins loiter around preaching how sanitized and tribeless they are, only the employed civil servants and job-seekers have tasted the humble pies of ethnic discrimination as a matter of fact. They have CD4 receptors for Nepotism and segments of Corruption.

The political game of these men is ‘Defending Dynasty Game’ which is not bad when the successors are of great potential and enigma but this is always accompanied by biases.Kenyan politics have broken the threshold, have negatively influenced Economic growth, Social growth.We are swimming in the contaminated water of politicking, slavery and now we are on diarrhoea.

When they make foreign trips, we get pride because ‘Our Own’ stepping up to world-class but it’s never in our best interest but their best interest; they expand family business as you and me struggle through the sticky mad of high and harsh cost of living.
Have a digestion of this short realistic imagination.You get to school far away from home then your diet changes to taking French Fries “chips” daily and everything is well but when you weigh your weight when you get back home, it’s reduced though you never felt sick.You wonder and you were ever full. If Nelson Mandela, Julius Nyerere, Kwame Nkrumah could wake up today from the grave would not be proud of Kenya and same to Jomo Kenyatta would not be quite happy with his son.

It’s sickening, shaming that after 54yrs of liberation we are still dancing the same tune.If it’s a matter of Superpower and Superiority then I won’t be surprised again if Post-election violence erupt.Of cos, this battle for Superiority in history led to COLD WAR, WORLD WAR 1 and WORLD WAR 2.

Let us get back to history considering Liberation and get a better option.We either rise together or fall together and float together or Sink together.The choice is yours, I have already done my part. A goat won’t get Justice when Leopard and Hyena are the Judge.It will instead be slaughtered. When bulls fight, it is the grass that suffers.

Related Content:  Raila's Good Days are Behind Him, The Luo Nation Should Focus On His Successor
Kenya Insights allows guest blogging, if you want to be published on Kenya’s most authoritative and accurate blog, have an expose, news TIPS, story angles, human interest stories, drop us an email on [email protected] or via Telegram
Related Topics:ElectionsOpinionPolitics
Up Next