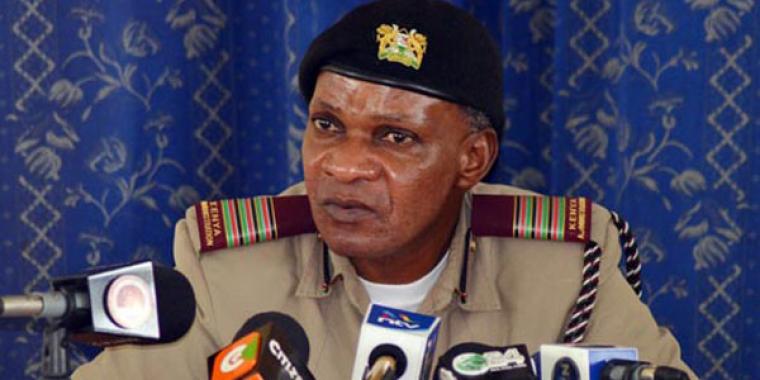 Coast regional coordinator Nelson Marwa is known for his stern administrative directives and enthusiasm to fight terror. He has also known for his on and off the feud with the Mombasa Governor H.E Ali Hassan Joho who at some point described him as ‘a small person’ in fact a desk officer.

Their beef season is back, and Marwa is doing what he does best to please his boss. He is threatening to arrest Governor Joho for leading a group of rowdy boys to bring down a perimeter wall around a piece of land that the governor alleges belongs to the defunct municipal council of Mombasa.

Marwa, on the other hand, told journalists that the parcel of land in VoK area near Bombolulu belongs to the Kenya Broadcasting Cooperation (KBC) and not Municipal Council. He said that the government would arrest Joho and have him charged in court.

“We have not seen any of the 47 Governors chest thumping and breaking the law, we will not allow the governor to go free after destroying property that cost the tax payers money to put up,” said Marwa. The feud between the two is nothing new; Joho sees Marwa as the president’s ‘mtu wa mkono’ who seeks every opportunity to frustrate his efforts even after being promoted from being Mombasa County Commissioner to Coast regional coordinator.

No one has seen other regional coordinators at war with governors either. The said parcel of land has been lying idle for decades in a place where absentee landlords dwell when the natives are turned squatters. The working relationship between the two leaders is wanting, no one is interested in watching their unending drama.

The coordinator may have a valid point, but he seems to be so working for the executive forgetting that whatever he does for the executive should be to the right of the people. This cannot be achieved through constant fights with the county governments. You can’t transfer governors; you can transfer coordinators if their relationship with the regional governments is affecting service delivery.

Mombasa and the entire coast region want to be served with dignity, not chest thumping and supremacy battles. The national government has always been seen to be ‘after’ governor Joho, the already created impression can’t just be whisked away whether Joho is wrong or right, Marwa is a federal government appointee and known to be serving the interest of his employer.

Leading a troop of hooligans to demolish the wall is not acceptable, the governor had other better options to address the issue, but this is happening because it’s a habit that has been condoned. Nairobi Senator Mike Sonko once led a group of hooligans, punching walls and breaking private property in protest of public land grabbing, nothing was done to him. The law should not be applied selectively.

Joho is not the only governor in the Coast region; Marwa has become so much of ‘a puppet,’ anyone can guess who is pulling his strings and the crowd he is entertaining. He should stick to provincial administrative mandates and let politicians play their dirty games. Provincial administration roles and politics don’t mix.

Kenya Insights allows guest blogging, if you want to be published on Kenya’s most authoritative and accurate blog, have an expose, news TIPS, story angles, human interest stories, drop us an email on [email protected] or via Telegram
Related Content:  Glorified Thieves, Corruption And Impunity Not Punishable In Kenya But Rewarded With Political Posts And Privileges
Related Topics:JohoMombasaNelson MarwaOpinionPolitics
Up Next

If Corruption is Allowed To Continue in Kenya At The Rate It Is Doing, It Will Be The Sole Cause of The Collapse of The East African Powerhouse