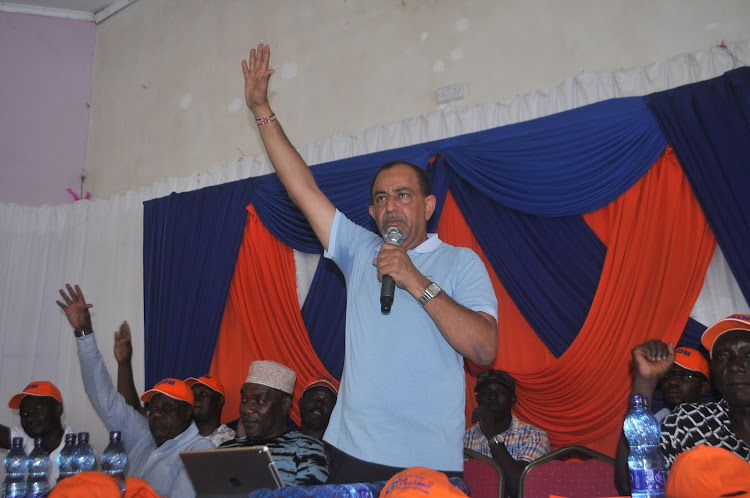 Being an ODM’s stronghold, the region’s political bigwigs are engaged in high voltage fights that according to analysts, threatens to break the strings holding the Raila Odinga’s led party.

Mombasa governor ticket has come into focus more so much than any other. Mvita MP Abdulswamad Nassir who’s been leading in recent opinion polls is not having his smooth way as his arch rival and businessman Suleiman Shahbal  engages his arsenal in ensuring the legislator doesn’t overrun him.

Shabhal is trying to make a third stab on the county’s top seat. Branded by critics as a party hopper, Shahbal made his first attempt and was defeated in 2013 by the incumbent Governor Hassan Joho when he contested through Kalonzo Musyoka’s Wiper Party.

In 2017, Shahbal ran on a Jubilee Party ticket, but still lost to Joho for a second time. At the time, Joho resoundingly thrashed Shahbal with 221,363 votes against his 69,429.

Last year, Shahbal returned to ODM from Jubilee and is now battling with Mvita MP Abdulswamad Nassir for the ODM ticket in the governor’s race.

On Thursday, the ODM National Elections Board brought together the contestants from Mombasa to a meeting held at Emory Hotel in a bid to arrive  at a consensus on the best candidate to front for the party but all didn’t end well.

During the meeting, other contestants didn’t agree with opinion polls results that the party was relying on for the best bet with the disgruntled revolting that they don’t trust the process. According to documents availed to our desk, Abdulswamad was favored in all polls as the leading candidate while his opponents who were trailing at a distant, thrashed the results as being fake and untrustworthy.

The NDC approved the use of consensus, direct nomination, identification of candidates through voting by delegates and universal suffrage, through which ODM members would vote for their preferred candidate.

However, the NEC noted they favour consensus while direct nomination would be the last resort.

Raila is on record stating that parties affiliated with the Azimio la Umoja Movement will have to sacrifice their ambitions for the good of the budding coalition.

”I discussed with my party leader and it became apparent that if the national chairman can sacrifice his ambition because of leadership of women, then so be it. I had a huge following in the county. If you look at the anger on the ground, you can clearly see I had captured the imagination of the people.” Mbadi is quoted in a media publication.

“I have supported my party leader since1992 and he told me that he wants to work with me at the national level. I’m happy that I took the risk for the sake of Raila. This will be the first time since 2007 that I will not seek an elective seat.”

According to intelligence briefs in the holds of Kenya Insights, ODM had to postpone the party primaries for Mombasa and Kilifi counties.

The party in a statement on Saturday said the move is meant to enable the conclusion of ongoing consultations and consensus-building.

The party primaries for Kilifi and Mombasa were scheduled to take place next week on April 5 and April 6 respectively.

Reports also indicate that Kenya’s High Commissioner to Tanzania Dan Kazungu who is also the former Malindi MP is also eyeing the Kilifi Governor seat through the ODM party.

In Mombasa, the fierce battle between the front contenders has threatened to split the party. While the party insists the choice of candidate should be informed by internal opinion polls amongst other internally laid structures, Shahbal who’s coming second after Nassir in both polls, has rejected the results terming them untrustworthy. In remedy, the party’s top organs have recommended a third, last and determinant poll to square out the stalemate but insiders tell our writer that the businessman is not going to hear none of it. “He’s made it clear that he’s either his way or no way,” a source close to the negotiations says.

”How can a national party be held hostage by interests of an individual? The party has structures and policies laid out that are not only binding to Mombasa but all the counties, why would the part bend its tail for one person? As Saitoti once said, there comes a time when the interests of a nation  supersedes that of an individual.” A top ranking party official told this publication.

”We’re determined to arrive at an equal footing with both parties, we’re one family, squabbles are bound to happen. We’re still considering all options on the table and we’ve not exhausted anything. Nobody should feel unwanted, no one should feel too big or too small. We will square this out.” A senior source told Kenya Insights.

”We’re demanding nothing other than a direct ticket,” a close source cites Shahbal.

By the time of going on air, Abdulswamad’s team said they’re open for talks, Shahbal’s said they’re not taking anything other than universal suffrage and if not, they’ll bolt out, “we don’t trust ODM at this point and we have plenty of options” a Shahbal’s senior official told us.

Kenya Insights allows guest blogging, if you want to be published on Kenya’s most authoritative and accurate blog, have an expose, news TIPS, story angles, human interest stories, drop us an email on [email protected] or via Telegram
Related Topics:Abdulswamad NassirMombasaODMSuleiman Shahbal
Up Next