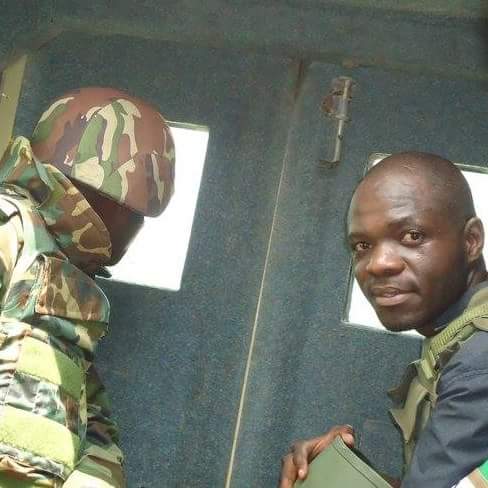 On the 5th day of May, vocal businessman and new age anti-corruption crusader Jacob Juma was fell in the spray of bullets. The incidence shocked the country, one person who had all the prints and fingers pointing at over the heartless murder was the state. From CORD leader Odinga to friends, the killing was attributed to a lethal police hit squad.

As Kenyans were grasping with the news, one person who thought he was next in line from his intelligence sources or basic instincts, went into hiding. Freelance journalist, Yassin Juma on getting the news of Juma’s death amassed his family, and both went into hiding. He cringed for his life.

Yassin was in January arrested for ostensibly posting classified information on the number of KDF soldiers that were killed in the El Added attack by the Al Shabaab militia group. According to Intel that Juma got, a total of 103 soldiers died in the massacre. He went ahead and posted on his blog, shells of the destroyed KDF armory that were released by the militia’s propaganda unit.

Publishing of this ‘sensitive’ information angered the authority principally Interior Ministry led by CS Nkaiserry. He was later picked up from his house in Nairobi’s Donholm estate. 16 CID officers effected the arrest in what looked like a terror suspect apprehension.

He was accused of posting photos of dead soldiers on his blog, claims he say were being peddled by PSCU based on hearsay. He would remain locked up at Muthaiga police as police embarked on investigations that would yield no fruit, they didn’t find the said photos on his site.

Yassin Juma was a victim of the prohibitive law that has since been disbanded- section 29 of the Information and Communication Act, which prohibits the “improper use of a licensed communications system”. Interior CS Nkaissery warned that anyone publishing any information on the attack without KDF approval is a sympathizer of Al Shabaab and would be treated as one.

After fruitless attempts to have him locked up, Juma would later be released and just before his eyes would pass away, another scheme to have him locked up was in the offing. On leaving the cells, he posed for a picture with his friends outside the police station flashing a one finger salute.

The photos were quickly used in an endeavor of linking him to terror group leaders who often flash similar one finger salute, an attempt to make him look like one of them. Juma said the index finger signified his reliance to one God.

Juma attributes his woes to Mwenda Njoka, Dennis Itumbi (directors at PSCU, who have since been fired) and CS Nkaissery. He believes they are hell bent to see him go behind bars or worse still dead. Juma is a freelance journalist with the specific interest in war documentaries that he distributes to international publications. A course that has seen him travel to Somalia frequently.

He’s also a darling of the KDF troops who bring him on the warfront to cover the war on Al Shabaab. His movements and information sources in Somalia have been a headache to those behind his arrest.

The journalist has dismissed reports that he’s hiding in Somalia insisting he and family are in Kenya to stay despite the death threats. “Yes I have received death threats (including my family members) in the past, and it still continues to date from people who think I am prior to sensitive information that should not be relayed to the public or people who perceive to be more patriotic more than you and me. Yes I’ve been trailed, and my phone calls tapped, but I will continue to do what I do right here in Kenya.” Said Yassin.

Related Content:  If Corruption is Allowed To Continue in Kenya At The Rate It Is Doing, It Will Be The Sole Cause of The Collapse of The East African Powerhouse

He contends he’s in Kenya to stay and will not run away to any country to seek refuge. The defiant journalist is sending a message to his enemies, “to be born by luck but death is definite, I fear the Creator, not the Creations, if my day to die come it will and will be an honor to die a Shaheed if they( in ref to those baying for his blood)decide to kill me.”

In conclusion, Juma firmly say he’s in Kenya to stay and those grumpy by his work which he conducts with set ethics standards, “must be prepared to put up with me, this country is for us all, just because I am a Muslim, doesn’t make me subordinate of a Kenyan.” Declares Juma.

Kenya Insights allows guest blogging, if you want to be published on Kenya’s most authoritative and accurate blog, have an expose, news, story angles, human interest stories, drop us an email on tips.kenyainsights@gmail.com or via Telegram
Related Topics:Human RightsInvestigationsJacob JumaYassin Juma
Up Next