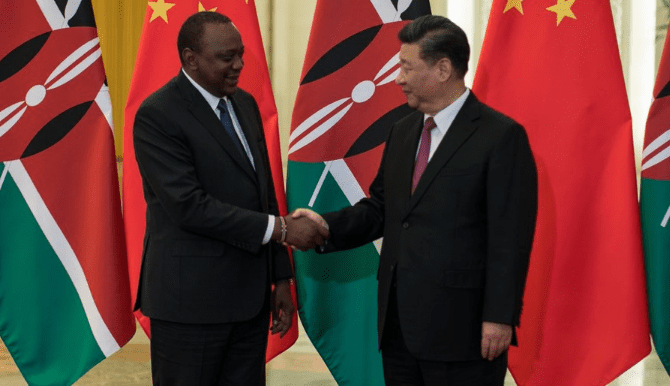 The Kenyan Government risks an auction  of  key  public institutions such as KBC and JKIA if it fails to meet its debt repayment commitments.

Kenya’s current public debt has exceeded the mark set by the Public Finance Management Act. The act allows every government to borrow only up to 50 percent to the GDP ratio.

Kenyan Parliament has now raised red flag over the bloating public debt induced by hefty borrowing. Emgwen MP Alex Kosgey has proposed the amendment of the law to regulate government borrowing. He termed the current debt standing at Ksh. 5.6 trillion as extreme.

Currently, President Uhuru Kenyatta and opposition leader Raila Odinga had a trip to Beijing, China. Government handlers had hinted that the trip aimed at securing another possible loan of up to Ksh.368 billion that had been meant to extend the Standard Gauge Railway (SGR) from Naivasha to Kisumu.

But there is a proposal before National Assembly’s Budget Committee that wants government borrowing permanently capped at Ksh.6 trillion.

Speaking before the committee, Sigowet Soin MP Mr. Koros said that Kenyans should not allow a state whereby the Treasury or the Presidency or anyone to just decide they want to borrow this much yet mwanachi is already over-strained by the current public debt.

According to Treasury, as at December last year, the public debt stood at a outrageous Ksh.5.3 trillion, with that amount expected to hit a record high Ksh.6.3 trillion by this year.

With China being the top lender, the Kenyan taxpayers are sweating to repay the Chinese government Ksh.637 billion with interests accumulated.

Kenya owes Japan and France a staggering Ksh.166 billion, with that amount even higher when all the interests are accumulated. This even as Germany, Italy, Belgium, USA and Finland are all training their eyes on Kenyan taxpayers to pay back their Ksh.63 billion.

Already, the government has listed three non-performing loans including Ksh.7.9 billion by the State Broadcaster KBC, Tana & Athi Rivers Development Authority’s Ksh.1.2 billion loan as well as the East African Portland Cement that has a loan of Ksh.1.5 billion.

These institutions now stand at a risk of facing auction should the government fail pay back the various debts.

Kenya Insights allows guest blogging, if you want to be published on Kenya’s most authoritative and accurate blog, have an expose, news TIPS, story angles, human interest stories, drop us an email on [email protected] or via Telegram
Related Topics:GovernmentPresident UhuruPublic Debt
Up Next

Kyle McCarter: Corrupt Kenyan Officials Will Now Be Denied Visas To The US