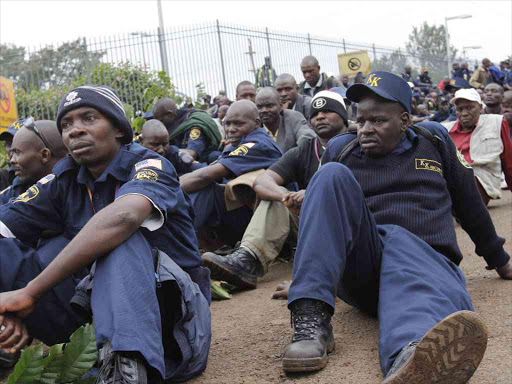 Private Security sector is undoubtedly the biggest employeer in the Country right now. Almost every money-making installation in the Country has security guards. Kenya has, unfortunately in the past and recent days, been an Al-Shabaab playing ground as the Somali-based millitia group launch their so-called  counter-attacks to both the Military and civilians.

That’s a story for another day, the Private Security sector employs approximately 700,000 Kenyans to man hotels, malls, supermarkets, schools, churches, hospitals, offises, ports, just but to name a few is goint to be the second most affected after the betting firms, dubbed as giants of the informal ’employment’ sector, were slapped with Tax regulations.

In just under 5 years, due to increased demand and still overgrowing according to experts, the number of security firms grew threefold to over 2,000 from only below 500 firms in 2015. Every single markert, town and City has a private security company.

To some, Private Security firms are a conglomerates of a blanketed disaster— most, if not all of the companies recruit ‘Watchmen and Watchwomen regardless as far they find the job suitable. Even though some firms say they give the chosen individuals basic training on basic security details ops, there is absolutely nothing wrong with that, but the deep probe into the matter reveals that most of the guards have never ever recieved trainins as the cartels with deep political links in the sector go for the illiterate, unfortunately—still who are the majority in Kenya.

According to Daily Nation, if a security company earns just Sh10,000 every month from each of these guards, in total they end up earning over Sh60 billion annually. The more established ones charge up to Sh60,000 per security guard and factoring in this, the sector could easily be earning more than Sh100 billion a year in revenues.

The dripping billions are at the centre of a conspiracy between some private security companies and lawmakers that has thrown the poor security guards under the bus and corvered with their peanut pays.

The sector is also full of discrimination, i presume is reason why the politicians who have injected billions in the sector go for most illiterate folks—they are easy to manipulate financially. Some firms, i suppose most of them,  pocket statutory fees such as NHIF and NSSF deductions after cutting them from the poor guards’ pay.

“We have responsibilities to look at both the interests of the guards and the employer. It is not fair that the consumers pay Sh50,000 but guards only get Sh5,000 from the companies,” said Interior Principal Secretary Karanja Kibicho.

But PS Kibicho will still have to convince the cartels who have huge interests in the sector. The Private security firm invisible owners who cut deals to have corporates and other establishments pay between Sh40,000 and Sh65,000 per guard, while security firms end up paying some guards as little as Sh7,000, which is way below the minimum wage guidelines.

Security experts state that such injustices and exploitation contribute to theft in the institutions manned by most of these security firms as suffering guards are easily lured by criminals to execute inside jobs. Terrorists are also a threat to us lest we forget.

Soon after the Private Security (General) Regulations, which were to put to effect the 2016 Private Security Regulations Act, were published, various players were invited to give their views before the Committee on Delegated Legislation, chaired by Uasin Gishu county Woman Representative Gladys Boss Shollei.

The committee that in Early November secretly flew to cut backdoor deals to get a friendly report with major firms and key private security stakeholders in Diani at the lavish Sh12,000 a night Indian Ocean Beach Resort.

The Shollei led committee voted with the big security firms to abolish the 2016 Private Security Regulations Act which was supposed to come to force by January 5th this year. This halted the security guards from getting at least Sh27,993 for a night guard and Sh25,641 for a day guard, in line with minimum wage provisions. This gave their plights at the table of their exploitive employers.

KNPSWU General-Secretary Isaac Andabwa says subsidiaries of foreign security providers, including G4S, Wells Fargo, KK, Ultimate Security and Fidelity Security, are already paying their guards the minimum wage and there is no reason local companies should not.

On their defense, private security firms unanimously issue a statement stating that.
“The private security industry associations are in agreement with the annulment by the National Assembly,”

This comes at a time the government has made good on its threat to start vetting all private security providers. Fred Matiang’i led Interior ministry last month ordered parties in the sector to submit to the Private Security Regulatory Authority (PSRA) their company certificate of incorporation and identification documents for State clearance.

“Only private security providers who may have been security vetted and cleared will be considered for licensing by 31st March 2020,” the Interior Ministry said in a press statement.

The private security sector will experience the biggest disruption if Fred Matiang’i push through with these changes. Probably bigger than the State disruption on the betting industry.

Kenya Insights allows guest blogging, if you want to be published on Kenya’s most authoritative and accurate blog, have an expose, news, story angles, human interest stories, drop us an email on tips.kenyainsights@gmail.com or via Telegram
Related Topics:Governmentsecurity guardswatchmen
Up Next

SWVL Adds Eldoret To Its List Of Long Distance Routes

Loss Making Sameer Africa To Lay Off Employees From February