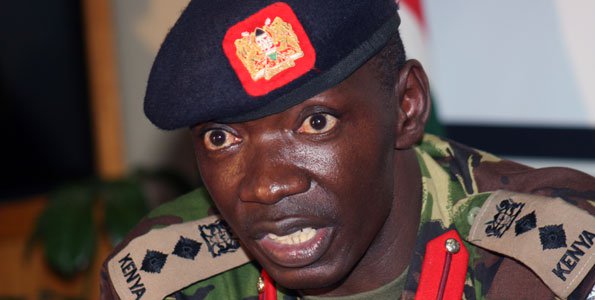 The directive reads and I quote; “In line with directions from the Executive office of the President through the Head of Public Service, the office of the Government Spokesman shall be domiciled at the Ministry of Information, Communication and Technology,”

“He will also have content oversight role over the two government news gathering and dissemination channels; Kenya News Agency and MyGov,” the directive adds.

Rtd. Col. Oguna was formerly the spokesman for the Kenya Defence Forces. He became popular and attracted so many public limelights with his tough talk when the KDF entered Somalia in 2011.

He was the senior most spokesman in the former ‘Operation Linda Nchi.’  Oguna faded from the limelight immediately when KDF and the African Union Mission in Somalia (AMISOM) joined forces.

Oguna replaces Eric Kiraithe, who previously served as the Kenya Police spokesman and Chief of Security at the Kenya Airports Authority (KAA).Kiraithe had served as Government spokesman since March 2016.

Kenya Insights allows guest blogging, if you want to be published on Kenya’s most authoritative and accurate blog, have an expose, news TIPS, story angles, human interest stories, drop us an email on [email protected] or via Telegram
Related Content:  Thousands To Lose Jobs As Government Goes After Cartel-Owned 'Watchmen' Security Firms
Related Topics:Cyrus OgunaEric KiraitheGovernmentSpokesman
Up Next

Luiz Suarez Apologizes To The Reds