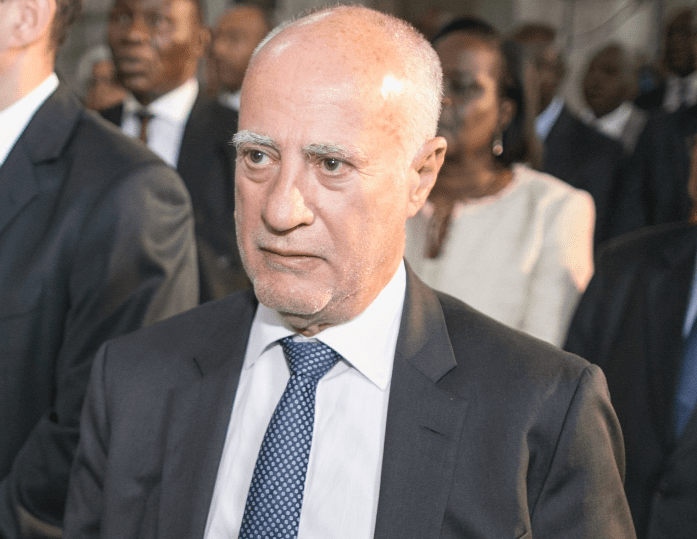 When Safaricom’s interim CEO stood up at All Saints Cathedral to pay his tribute to the late Bob Collymore, he was up to mourn and celebrate a friend. With a poem that apparently they had a pact with the late for whoever remains after the other dies to read, he had his own tribute to pay.

‘Whoever survived the other, would read the poem ‘My Funeral’ at each other’s funeral’ – Grief stricken Michael Joseph revealed the secret ‘funeral pact’ he had with Collymore.

Below is the full poem, titled ‘My Funeral’ as written by Wendy Cope:

I hope I can trust you, friends, not to use our relationship,

As an excuse for an unsolicited ego-trip,

I have seen enough of them at funerals and they make me cross,

At this one, though deceased, I aim to be the boss,

If you are asked to talk about me for five minutes, please do not go on for eight,

There is a strict timetable at the crematorium and nobody wants to be late,

If invited to read a poem, just read the bloody poem,

If requested to sing a song, just sing it, as suggested,

And don’t say anything,

Though I will not be there,

Glancing pointedly at my watch and fixing the speaker with a malevolent stare,

Remember that this was how I always reacted,

When I felt that anybody’s speech, sermon or poetry reading was becoming too protracted,

Yes, I was intolerant, and not always polite,

And if there aren’t many people at my funeral, it will serve me right.

All was well as the emotional South African national who is double blessed to serve the same company twice paid tribute until he said, “Over the last 15 years I went from being amused by this white man in a black body pretending to be a very serious corporate person to really becoming a serious corporate leader. To the only man I loved and desperately want to live forever, but somehow God had other plans, farewell my friend and God rest your soul.”

Related Content:  MPs Suspends The 16% VAT On Fuel In A Bill Sponsored By Junet Mohammed

His remark has not gone down well with many who feel that he was utterly racist. Kichumba Kipwambok writes, “That is a language perpetuated by a supremacist.  They think just because of their colour,  some how they are better in whatever they do. That a black man or woman cannot perform as good as they can.”

“According to Michael Joseph, no black man can have the compassion and other positive mannerisms of Bob. ‘He was a white man in a black man’s body.’Now you understand why no Kenyan is allowed to be Safaricom CEO? It’s the racist mindset of people like Mike.” Blogger Robert Alai commented.

Lawyer Donald Kipkorir also jumped in the conversation with the same tone, “When I said I don’t support Michael Joseph returning to Safaricom, it is bec I know him. I worked with him in the Safaricom IPO where I was Legal Advisor. I experienced his racism. I confirm that he’s a racist … He has no depth .. He was at the right place at the right time.”

The people seeking "clarification" over Michael Joseph's comment about Collymore having been a "white man in a black body" or whatever- you need to come to my class on Politics of the Body.
There's no mistaking the "intent" of that racist statement. There's no clarification.

Michael Joseph’s comments and the discussion & debate it has started represent something bigger than MJ: a problem with how society continues to talk about & define racism. I am worried about the fact that there are some folks who saw nothing wrong with his offensive comments.

However, not everyone saw everything from the same racist scope like lawyer Nelson Havi, “Bob Collymore was a white man in a black skin, a technical term rightfully applied by Michel Joseph to describe disparity of Western/Developed v African/Developing cultures. It wasn’t about colour or race. Any other interpretation is mediocre and myopic. Let Michael speak.” He tweeted in MJ’s support.

Related Content:  Uhuru's Family In Court Over Sh57.6 Million
Kenya Insights allows guest blogging, if you want to be published on Kenya’s most authoritative and accurate blog, have an expose, news TIPS, story angles, human interest stories, drop us an email on [email protected] or via Telegram
Related Topics:
Up Next

Woman Chops Off Husband’s Penis For Denying Her Sex