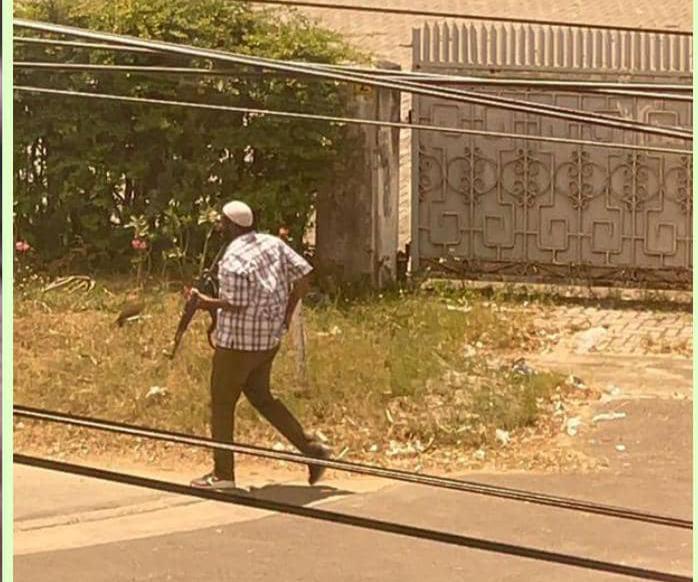 Police in Dar es Salaam has shot down a gun wielding assailant who was on a shooting spree roaming the Ali Hassan Mwinyi Road from the Selanda Bridge area.

The man whose identity is yet to be established was trotting the streets while wielding two assault rifles with city dwellers at his mercy.Road users on the usually calm Oyesterbay/Upanga area were forced to abandon their cars as they ran for dear lives.

Videos posted on social media show a joint police operation round up the assailant before he is gunned down in the middle of the road outside the French Embassy gate.

VIDEO: A lone gunman carrying two automatic rifles who went on a shooting rampage near Stanbic Bank/French Embassy buildings in Tanzania's commercial capital Dar es Salaam this morning, has been subdued by police officers after being shot in the middle of the road pic.twitter.com/kdMrBCBYlv

Eye witnesses who were at the scene say the cocky assailant could have killed some people during the shooting.

The man who was wearing a checked shirt is seen punching in the air then thumps his chest in a presumed victory before he is brought down by a hail of bullets from security forces.

The Selanda Bridge area which borders Upanga and Oysterbay is surrounded by residents of foreign missions such as the French Embassy, Japanese Embassy, Kenyan embassy, Russian embassy and a close proximity to financial institutions such as Stanbic Bank and KCB Bank.

Related Content:  Banks Warned Against East African Crude Oil Pipeline
Kenya Insights allows guest blogging, if you want to be published on Kenya’s most authoritative and accurate blog, have an expose, news TIPS, story angles, human interest stories, drop us an email on [email protected] or via Telegram
Related Topics:PoliceTanzania shooter
Up Next