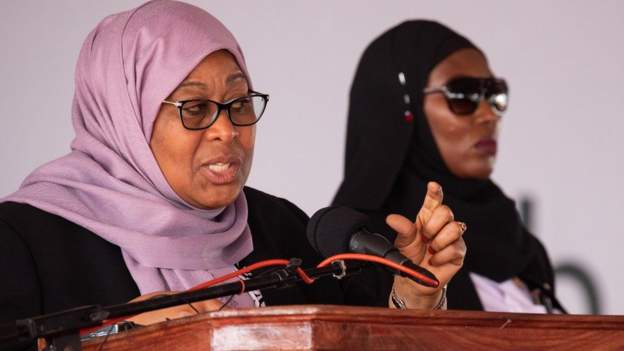 Tanzanian President Samia Suluhu Hassan is being criticised online for her remarks on female footballers having “flat chests” and being unattractive for marriage.

The president was speaking at state house in Dar es Salaam to receive a trophy won by the national under-23 football team for the season’s Council for East and Central Africa Football Associations (Cecafa) challenge cup.

She said while women were making the country proud by winning trophies, some of them did not stand a chance at getting married because of the way they looked.

“If we bring them here and line them up, for those with flat chests, you might think they are men – not women,” she said of the women’s football team.

She said while some of the sportswomen were married, most of them were not, “and for the way they are, a life of marriage… is a just a dream”.

The president said sportspeople were living a tough life after their career in sports and asked the authorities to ensure their future was well taken care of after retirement. She noted that it was particularly harder for women “where their legs are tired, when they have retired from the sport”.

Some people have been criticising her remarks. One Twitter user shared part of President Samia’s speech while criticising it:

“This is what the ‘first female president’ has to say about other women who are challenging stereotypes by playing professional soccer!,” Maria Tsehai said.

So all those cheering a female presidency who don’t understand Swahili, @SuluhuSamia is denigrating female football players for having “flat chests” and thus lacking attractive features necessary to get married
You must be proud @AWLNetwork 🙄#Tanzania
pic.twitter.com/FEYCdqqQmB

“What she says is not true!! She has generalized without scientific facts regarding women athletes their flat chest and their not having beauty and regarding their marriage prospects!! She is not only wrong but she lies yet again!” said Harry Mwala.

Related Content:  Sudan To Compensate Kenyans Affected In 1998 US Embassy Bombing Sh600 Billion
Kenya Insights allows guest blogging, if you want to be published on Kenya’s most authoritative and accurate blog, have an expose, news TIPS, story angles, human interest stories, drop us an email on [email protected] or via Telegram
Related Topics:Samia Suluhu HassanTanzaniawomen football
Up Next