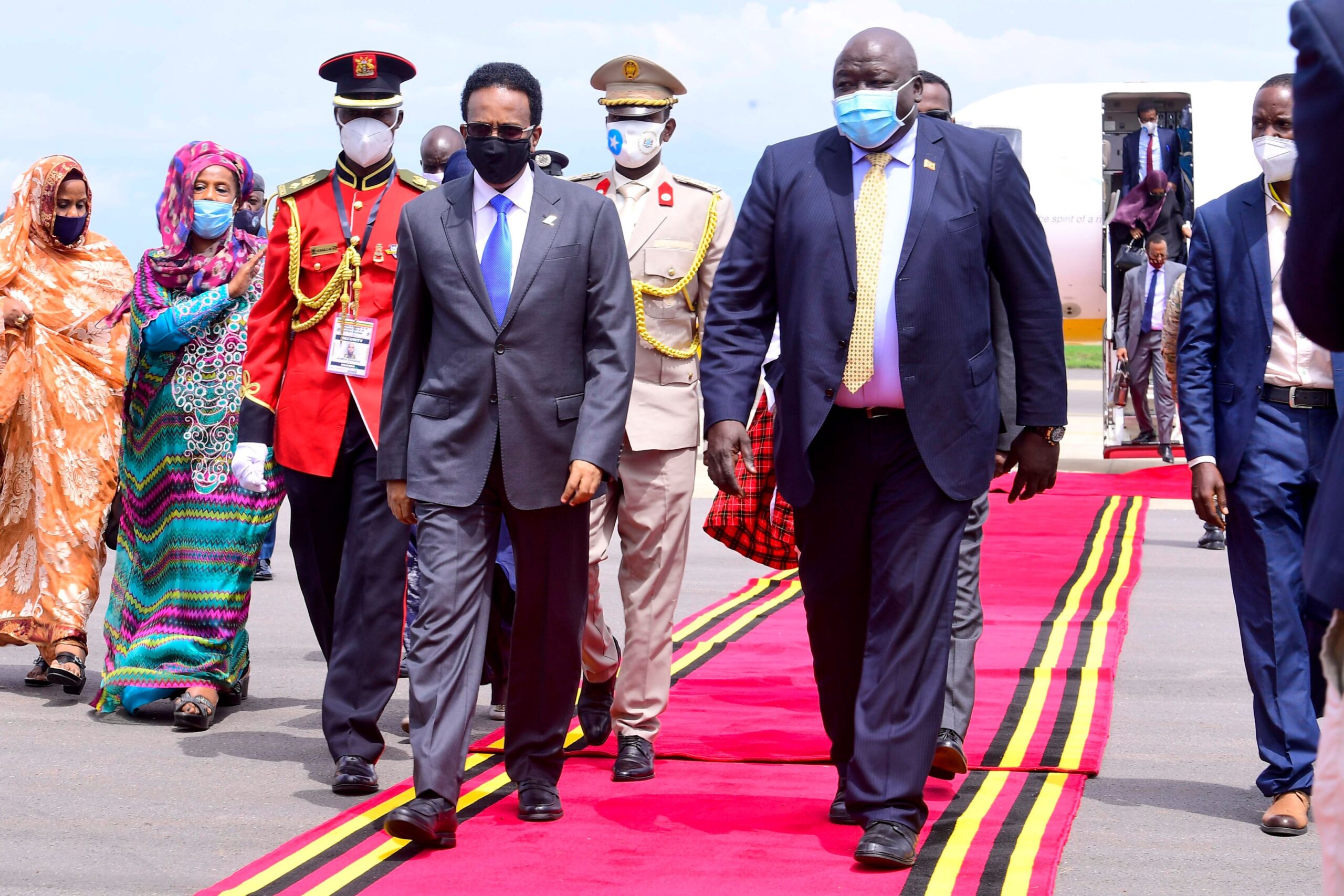 Somalian president Mohamed Fermaajo and his South Sudanese counterpart Salva Kiir are spending the night in Kampala ahead of the swearing-in ceremony of President Yoweri Museveni scheduled for May 12 2021.

Museveni will be taking an oath for his sixth term in office after suppressing his opponent to win the shady elections held on January 14 2021. The long serving leader of Uganda was announced the winner by the country’s electoral body after he purportedly garnered 5.85 million votes against Robert Kyagulanyi’s 3.48 million votes.

Media outlets in Uganda have reported that some eleven heads of states are expected including Kenyan President Uhuru Kenyatta are expected to attend the fete that will mark another fresh term for the dictator who has ruled since 1986.

Only the two President from the countries which have not seen stability and democratic elections in decades are already in Kampala for the event that will be skipped by South African President Cyril Ramaphosa.

Fermaajo who rules Somalia which has been in war since 1990 recently had to climb down from his previous stance in which he defended the decision to extend his term by two years after public and opposition outcry.

Fermaajo is also believed to have backed from the dictatorial move to extend his term after his allies including the federal states of Galmudug, Hirshabelle and South West shifted allegiance and demanded an immediate election to resolve the impasse. Opposition camps like National Salvation Forum was also piling pressure on him to reverse the move. 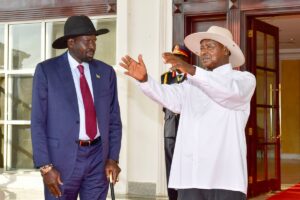 President Fermaajo is also at conflicts with his Kenyan counterpart, Mr Kenyatta, after their countries were engaged in a dispute over the maritime boundaries for years. Mogadishu further accused Nairobi of meddling in her internal affairs leading to call up of their respective ambassadors last December.

The two countries mended their diplomatic ties last week but the pact was today dealt a blow after Kenya suspended all flights to and from Somalia with immediate effect.

South Sudan’s Salva Kiir also flew to Kampala on Tuesday, barely 24 hours after reconstituting parliament he dissolved two days ago. The move made on Monday night will now pave way for the formation of the Revitalized Transitional Legislative Assembly as stipulated in the 2018 peace agreement he signed with his former foe, Riek Machar.

Through a presidential decree read on state-run television, South Sudan Broadcasting Corporation, Kiir appointed 550 lawmakers from all parties that signed the revitalized peace accord.

Machar was was sworn into office in February 2020 to mark an end to their rivalry after the two leaders of the young nation fell out in 2013 leading to a conflict that claimed more that 4,00 lives and displaced millions.

In 2016, a report commissioned by American Actor George Clooney showed that Kiir, Machar and high ranking military generals heavily profited from the war.

Also in Kampala ahead of the ceremony is the Burundian President Évariste Ndayishimiye, Sudanese vice president Malik Agar Eyr, South Africa’s minister of international relations and cooperation Naledi Pandor, and the executive secretary of the International Conference on the Great Lakes Region (ICGLR), João Samuel Caholo who landed in Kampala on Tuesday afternoon.

The ceremony will be boycotted by the opposition who accused Museveni of using the state machinery to rig the January elections. On Monday night, Opposition leader, Robert Kyagulanyi alias Bobi Wine and former presidential aspirant Kizza Besigye tweeted that their homes were surrounded by police.  Besigye has also critized african leaders for attending Museveni’s oath taking bash.

The guilty are afraid! I’m now abroad; yet…

Foreign “guests” who come to attend such an imposition of a Junta become accomplices to the NRM/M7 Junta crimes.

Lenders to such a regime must know that Ugandans aren’t bound by such debts.https://t.co/1n93NdhLGg via @DailyMonitor

Related Content:  Mali Coup Leader Declares Himself President
Kenya Insights allows guest blogging, if you want to be published on Kenya’s most authoritative and accurate blog, have an expose, news TIPS, story angles, human interest stories, drop us an email on [email protected] or via Telegram
Related Topics:Bobi WinePresident Mohamed FermaajoSalva KiirYoweri sixth term
Up Next