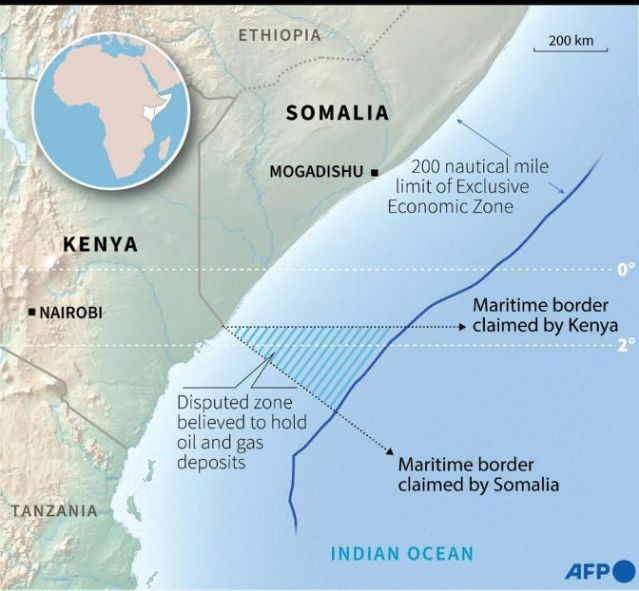 The UN’s top court allowed Somalia’s case to go ahead in a long-running maritime dispute with Kenya Monday, saying it regretted Nairobi’s refusal to attend.

Kenya announced earlier that it would snub this week’s International Court of Justice hearings after the Hague-based court refused to allow further delays in the case.

Somalia has asked the ICJ to rule in the dispute, potentially deciding control over a large Indian Ocean zone that is rich in fish and which might contain substantial crude oil reserves.

“The court regrets the decision of Kenya not to participate in the oral proceedings,” ICJ President Joan Donoghue said.

But the court would go ahead with hearing Somalia’s case, and would use written evidence provided by Kenya instead, Donoghue said.

Somalia criticised Kenya’s “defiance” of the ICJ, which was set up after World War II to rule in disputes between UN member states.

“We are deeply concerned that Kenya has decided not to appear at these hearings,” sad Mahdi Mohammed Gulaid, opening Somalia’s case.

He said it was “inconsistent with the rule of law” and Kenya’s commitment to the court.

Kenya “has no grounds to complain about its treatment by the court” after the ICJ granted three previous requests for delays that held up the case by 18 months, he said.

“Fortunately this regrettable decision to boycott the oral hearings cannot prevent them proceeding, nor can Kenya’s defiance prevent the court from fulfilling its mission,” added Gulaid.

The ICJ is hearing a case brought by Somalia in 2014.

Somalia, which lies northeast of Kenya, wants to extend its maritime frontier with Kenya along the line of the land border, in a southeasterly direction.

Kenya wants the border to head out to sea in a straight line east, giving it more territory.

The disputed triangle of water stretches over an area of more than 100,000 square kilometres (40,000 square miles).

Kenyan prosecutor Kihara Kariuki had earlier said in a letter his country would not be participating because the Covid-19 pandemic had “hampered Kenya’s ability to prepare adequately for the hearing.”

In its letter, Kenya also argued that holding the ICJ hearings virtually did not allow it to present its case in the most effective way.

The ICJ on Monday however dismissed Kenya’s request for a “thirty minute opportunity to orally address the court before the commencement of the actual hearings.”

Kenya recalled its ambassador to Somalia in February 2019 after accusing Somalia of selling oil and gas blocks at a London auction despite the pending delineation case before the ICJ.

Kenya also contested the ICJ’s authority to rule in the case, but the court dismissed its objections in 2017.