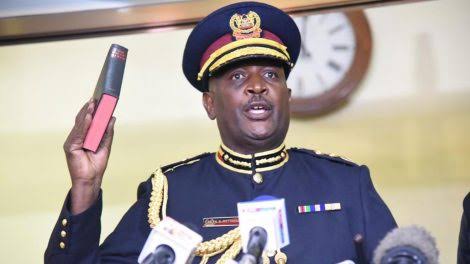 Police constables George Wathania, Kibet Chemipei and Boniface Muthama are the officers recorded clobbering Allan Omondi, the JKUAT student who was caught while running to safety.

The students who were demonstrating the increased insecurity in Juja clashed with anti-riot police and, as some alleged on social media, angry locals who were supporting the police brutality.

You can't watch this with a straight face! I'm fighting back tears.
Beating a #jkuat student like a rodent. Unprofessional, wtf.pic.twitter.com/5EoMEVqGMo

Netizens had reactive to the viral video a move that prompted the CS for Interior Interior Dr Fred Matiang’i to respond. National Police Service Commission (NPSC) has released names of three of the four police officers caught on camera brutally assaulting Allan Omondi.

I have spoken to the IG and we both agree that firm and decisive action shall be taken against any officer who used excessive force, within the next 24 hours.

National Police Service Commission Chairman Eliud Kinuthia said the fourth officer was yet to be identified.

“The identification of the 4th police officer is delaying because, it’s a process, and the angle of the image on what is happening needs assurance and should be right. It is not yet set on which date or how long the investigation will take,” said Kinuthia.

The three police officers who have been identified have since been interdicted to allow for investigations before further disciplinary action is taken against them.

In what is perceived as a bluff to the public, the Police boss said the conditions of the Allan Omondi, the student who was assaulted are unclear despite pointing out that injured students are receiving treatment at different levels.

Related Content:  Maralal Police Boss Shot Dead
Kenya Insights allows guest blogging, if you want to be published on Kenya’s most authoritative and accurate blog, have an expose, news TIPS, story angles, human interest stories, drop us an email on [email protected] or via Telegram
Related Topics:brutalityFred MatiangiInsecurityJKUATPolicestudents
Up Next