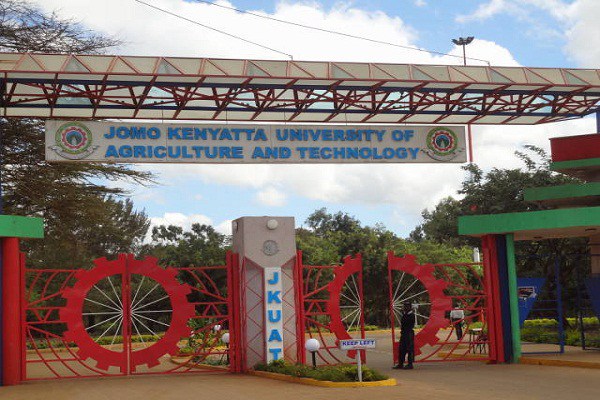 Juja-based JKUAT students have been demonstrating for a better part of the day and the State deployed anti-riot teams to ‘calm down’ the situation. Students were demonstrating against increased insecurity in and around the institution.

An amateur video recorded in Juja exhibits a few tricks and merciless ‘techniques’ our forces graduated with after a year-plus training on how to handle riot by unarmed citizens. In the video, a JKUAT student named Allan Omondi, was captured in between the soldiers boots and clubs receiving a mob beating from soldiers who cared for nothing about his life after.

The video shows 5 officers violently beating a JKUAT student whose right leg is heavily bandaged. One of the officers is seen kicking his head, tugging his hair, and beating with batons.

Here is the video courtesy of Linus Kaikai.

The institution has since been closed and all students ordered to vacate the premises by the end of the day. 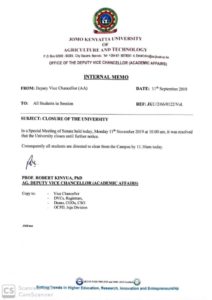 Many Kenyans had mixed reactions on the video that captured yet another police brutality with some alleging that Juja town is full of drug traffickers and unemployed youths that are terrorizing locals and students.

Here are randomly sampled reactions from Kenyan on Twitter.

Shame on you. Shame on Kenya Police. Do you have children? You and your goons-police are paid by Kenyans to protect not maim #jkuat
students. @FredMatiangi @InteriorKE@StateHouseKenya @IG_NPS https://t.co/98B84xmP2B

This is how the guys tasked with ensuring security in Juja are beating up innocent JKUAT students for protesting over insecurity. @NPSOfficial_KE @DCI_Kenya @IPOA_KE#jkuat pic.twitter.com/VfvYtaqfGz

We call upon this bodies @NPSOfficial_KE @DCI_Kenya @IPOA_KE to investigate this clip on how cops man handled a student who was walking home and not protesting #jkuat pic.twitter.com/oJW5mjBEgd

Allan Omondi's mother is at the mention police station at this ungodly hour begging for his release. @PoliceKE @StateHouseKenya what happened to *Utumishi kwa wote? "

The violence meted on JKUAT students is barbaruc, evil and UNACCEPTABLE.
As stakeholders, we will not watch students get maimed in school by those who should protect them.
Radical actions to follow.#jkuat

Protesting because of the increased crime rate in juja, yet drugs are being sold in every corner, what do you expect?#jkuat

#jkuat is not a university where students just dream of riots and wake up to actualize it. There has been so many cases of student stabbing and nothing is being done, as Jkuat student it terrifies me too and would have joined them is I was in that campus. Jkuat has smart Kenyans

Everything that has happened at JKUAT and Juja is enough to call for a citizen protest but because its not yourself or son or daughter you'll just blame the rioting students…. Its not fair even in the eyes of God??#jkuat @FredMatiangi @IPOA_KE @NPSOfficial_KE

Related Content:  Government To Import Cancer Specialists From US, India And China
Kenya Insights allows guest blogging, if you want to be published on Kenya’s most authoritative and accurate blog, have an expose, news TIPS, story angles, human interest stories, drop us an email on [email protected] or via Telegram
Related Topics:JKUATjujaJuja OCPDnetizensPolice Brutality
Up Next