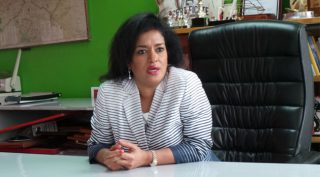 A tribunal chaired by Kyalo Mbobu and James Atema Paul Ngotho as members before the Kilimani court has dismissed Passaris’ plea to have the decision by Registrar of Political Parties blocking her from registering Harambee Democratic Party overturned.

A second letter was issued by the registrar of political parties on 24th August 2016 by which Passaris was informed that “Section 8(c) of the Act provides that the Registrar may refuse an application for the registration of a political party if the name or symbol that wishes to use the Act so nearly resembles the name or symbol or an abbreviation of the name of another political party registered under the Act or any other legal entity registered under any other written law. This is, therefore, to inform you that the name Harambee forms part of the National Coat of Arms of the Republic of Kenya recognized under Article 9c of the Constitution.”

In appealing the decision, Passaris premised it on numerous grounds, key among them being that the rejection of the proposed name by the registrar was unlawful, unconstitutional and whimsical since the allegation that the name is not in compliance with the Political Parties Act 2011 and Article 91 of the Constitution is a clear misreading of these provisions of the law.

In her defence, Passaris argue that whereas the word “HARAMBEE” is protected by law from use; it is so protected, but not when used in other words and for purposes that are not in conjunction with other words and objectives connected with the National Coat of Arms, and the proposed use of HARAMBEE DEMOCRATIC PARTY (HDP), is not an improper use of the said word, and is not prohibited under the provisions of Section 3 Cap.99 Laws of Kenya W . of the National Flag, Emblems and Names Act, while acknowledging such protection, her position is that such protection from use or abuse extends to the singular use of the each of the said names, and to avoid commercial exploitation and the creation of the notion of state patronage and approval in otherwise private undertakings, and to guard against the use of trademarks bearing such names; but when used in conjunction with other words, the same names are available and can lawfully be used for other purposes.

Passaris argues further that, the said names have clear and distinct Kiswahili language meanings of their own, and cannot be said to exclusively belong to the State, and have therefore had widespread application and use in society when and where they do not violate any written law.

One wonders why the case of Harambee Party is treated differently by the registrar in obvious bias steps alleged bias, for example, the fact that there is a party with the name Madaraka which, like Harambee, is a name protected under the National Flag, Emblem and Names Act.

The tribunal findings surprisingly coincided with Passaris’ thinking on The reasons given by registrar for refusal include that the name Harambee has also been used by other entities registered under other laws. The examples provided by the registrar are Harambee Stars (the national soccer team) and Harambee SACCO Society Limited. However, this argument is self-defeating for if other government offices have registered entities with the name Harambee, why should the Registrar of Political Parties claim that the name can never be used since it forms part of the Coat of Arms and is protected under the National Flag, Emblem and Names Act?

In a sharp, abrupt turn, the tribunal ruled that in their reading of the National Flag, Emblem and Names Act is that the word ‘Harambee’ (alongside the other protected words Nyayo, Madaraka, Jamhuri and the name of the President) cannot be used as the names of companies, firms or other bodies of persons, including political parties. Saying they’re well aware of the evidence which seems to show that the Registrar of Companies has allowed the name Harambee to be used by a company.

Related Content:  A Bright Career Killed, Willis Raburu From a Great Journalist to a Socialites Promoter

The ruling has been criticized by the section of legal fraternity with one prominent judge heard saying the findings were idiotic and out of the constitution. It’s for example laughable thinking Kenya can’t differentiate between Jubilee party and Jubilee Insurance as one of the examples cited by the registrar. These things are as separate and can be told apart.

It’s, therefore, unfair for the registrar to deny Passaris a chance to registrar her party early enough to give her time to popularize it countrywide and formally launch her gubernatorial bid. She has moved to the high court to appeal the decision with hopes she will be granted permission to have the name registered.

Kenya Insights allows guest blogging, if you want to be published on Kenya’s most authoritative and accurate blog, have an expose, news TIPS, story angles, human interest stories, drop us an email on tips.kenyainsights@gmail.com or via Telegram
Related Topics:Esther PassarisHarambee Democratic PartyNewsOpinionPolitics
Up Next

If Corruption is Allowed To Continue in Kenya At The Rate It Is Doing, It Will Be The Sole Cause of The Collapse of The East African Powerhouse