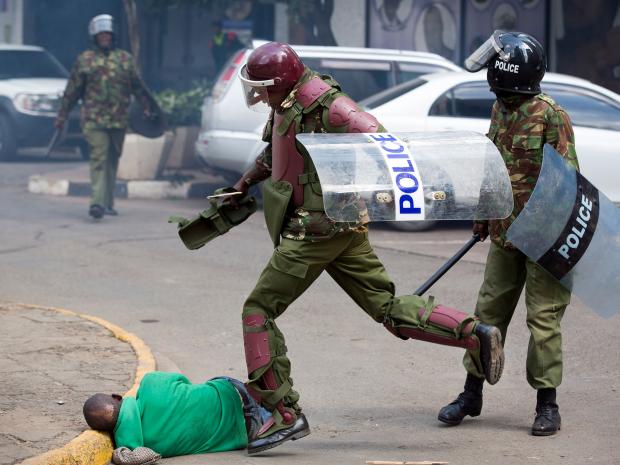 If you want to kill a dog first give it a bad name and be consistent. Falsely and persistently propagate in the neighborhood that the dog is a vagabond that poops everywhere, a dangerous rabies infected dog that bites anyone on sight, an ugly dog with no place to lay the soul of its feet’s upon. With that bad name in the neighborhood, every Tom, Dick and Hurry will take that accusation as a gospel truth and will immediately start to search and look for that dog in the neighborhood, believing the dog is a threat to public health, safety and security, and there after they will kill the innocent and humble dog, and bury it without a grave symbol. A lie told more frequently often become truth, and it occurs without conscious awareness.

Like the dog Mass action in Kenya, a technique of social political action for applying power in a conflict without the use of violence has been demonized and more often been given a bad name. There is an increasingly common narrative in Kenya, a fallacy that broadly interpret mass action as violent insurgency, a sporadic violence, crime against humanity, a widespread or systematic attack directed against one another or certain group of people, deportation or forceful transfer of population, a machete wielding event, angry lawless opposition engaging in jungle justice, killing, maiming, chopping each other, eliminating and displacing one another, looting and destroying properties. These common perceptions and myths about mass action have been imposed and programmed into Kenyans mind, and Kenyans have conceptualized this lie as gospel truth, a gospel which does not accurately reflect the reality of what mass action is.

The origin of this fallacy and narrative has all along been propagated by agents provocateurs used by the adversaries. Those who have a phobia of the word “MASS ACTION, DIRECT ACTION, CIVIL DISOBEDIENCE OR CIVIL RESISTANCE”, those who do not believe in, “people’s power”. Those who are not ready to hand over political power, even after a result of free, fair and transparent electoral process, and their sidekicks the law enforcement agencies. Those who owns and controls the tools and means of production and propaganda like print and electronic mass media and state sponsored bloggers who fear the word “MASS ACTION”. {READ Police officers will arrest anyone who refuses to accept the results of the August elections, calls for mass action, http://mobile.nation.co.ke/news/Refusal-to-accept-poll-results-an-offence-/1950946-3857458-xeq4ie/index.html }
manono

The security agencies did not outcome out very clearly why they are burning nonviolent mass action.Such kind of reckless pronouncement is intended to make Kenyans choose violence before even attempting nonviolence. Why should state fear unarmed population? Does the government know the intense and extreme of that mass action that other Kenyans do not know? Or does it want to crush nonviolent campaigns in their infancy? This is a clear indication that the current government and economic elites who want to maintain status quo fears people’s power; they fear collective expression of opposition, dissenting, reactive or responsive views, values or interest.

The government fear mass action one of the various tactics and strategies of non violent direct action, or civil disobedience which will likely attract higher level of participation in the form of mass rallies and street demonstrations or other forms of social, political and economic non corporation, which comes in various tactics and strategies like stay a ways, sit ins, occupations, economic boycotts and so forth in which the number of participants is difficult to estimate. In 2007 post-election ended in violent due to states failure to effectively facilitate peaceful protest, prevent violence and engage in conflict resolution with those who were likely or intending to engage in violence.

According to Article 19 Eastern Africa Periodic bulletin that has been providing snapshots of the status of the protest in Kenya between 1st January 2016, and 30th November 2016, the organization documented a total of 175 protests of which 51 were violent. According to the report, violent protest in Kenya is normally triggered or sparked by police who violates critical parts of the international and local laws, especially regarding the use of force against protesters who are largely unarmed. It is a known fact that in Kenya, it is only government that enjoys a monopoly of violence. It owns machinery and tools of violence.

Related Content:  Security Threat: Why KQ’s Handling Of The Stowaway Is Below Aviation Standards And Could Cost JKIA Category 1 Status

This pronouncement by security agencies to bar mass action after August election is a clear indication that civic and democratic space is progressively shrinking in Kenya, which is a major governance issue. Nonviolent mass action is a civic space which should be protected and expanded by social movements, political parties, labor movements and other independent voices and actors at all level in the Kenyan society. The right to mass protest non violently in whatever form is universally recognized human rights, including the rights to freedom of expression, freedom of peaceful assembly and association, the right to take part in the conduct of public affairs, the right to freedom of thought, conscience and religion, the right to participate in cultural life, the right to life, privacy, liberty and security of a person and the right to non discrimination.

The Kenyan state has an obligation to respect the right to protest. Historically protests have inspired positive social change and the advancement of human rights globally. Protests enable individuals and groups to express dissent and grievances, share views and opinions, expose flaws in governance, and the public demand that the authority, corporations and other duty bearers rectify problems and are accountable for their actions.

Additionally, engaging in protest involves the respect and protection of other rights, such as the right to life, privacy, liberty and security of a person or freedom from discrimination. That is why the Kenyan state should not ban mass action but should emphasize on the non violent mass action. The right to join fellow citizens in protest or peaceful assembly is critical to a functioning democracy like Kenya, and it is at the core of Article 18 and 22 of International Covenant on Civil and Political Rights (ICCPR), Article 10 and 11 of the African Commission on Human and Peoples’ Rights (ACHPR) and Article 36 and 37 of the Constitution of Kenya 2010.

Unfortunately, Kenyan law enforcement has pronounced to violate these rights by banning mass action in August. The ban intends to thwart free public expression on election out comes. This means Kenyans will not be allowed to express their feelings. Banning non violent mass action is suspending Kenya’s constitution or amending the constitution through the back door, a constitutional coup. Non violent mass action is one of the various tactics and strategies of picketing that is enshrined in Kenya’s constitution. It is a tactic that is outside the bounds of the conventional political process and institutional methods of political actions.

It seems study of non violent action is something of a pariah within security agencies in Kenya and therefore we civilian population should not be deterred by the pronouncement. The pronouncement is threats and intimidations. Kenyans cannot all the time be forced to accept and move on every time when there is an electoral irregularity. Kenyans have a right to show their anger and frustrations in electoral processes through protest. We have a right in expressing our outrage and anger non violently as enshrined in the Constitution. We should use the constitution for our growth and power. Let us keep our focus and fought through violent repression to victory.

“In a Democracy, there will be more complaints but less crisis, In a Dictatorship, more silence but much more suffering.” – Amit Kalantri

Opinions are writer’s own and don’t necessarily reflect those of the Kenya Insights.

More Kikuyus Have Access to Power, Money, and Privileges Than any Other Tribe in Kenya.

Death At A Funeral, Kenyan Media Is Breeding A Beast That Will Devour Them