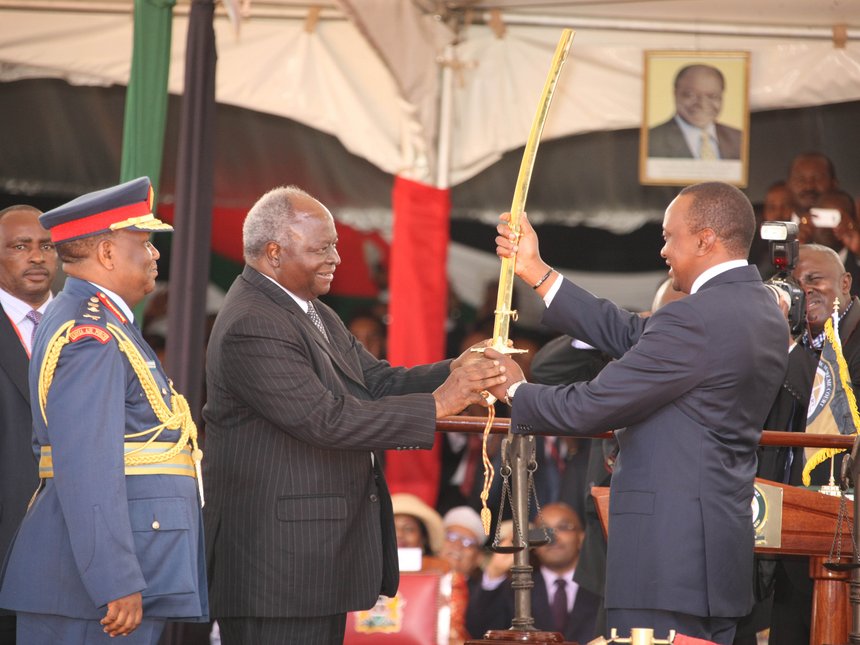 Mwai Kibaki handing over the tools of power to Uhuru kenyatta as the new president during 2013 inauguration.

I feel like we are taking David Ndii’s call for secession too literally and completely missing the point.

I believe this was an article meant to spark uncomfortable conversations and inspire thoughts on the state of our nation but we would need to think about it beyond individuals and emotions, first. We need to start addressing David Ndii’s reasons for calling for secession and stop the sideshows and victim mentality. If you’re feeling offended then you’re part of the problem

Kenya is not a nation. Kenyatta senior and his thieving cronies lost their chance to unite Kenya at independence and we are paying for it ever since. We have had 2 tribes leading Kenyans since independence and we have great economic instability that is tearing this country apart somewhere at the border of Central Kenya and Rift Valley.

This might boil down to the fact that we do not acknowledge Kikuyu and Kalenjin privilege. It’s pretty hard to see privilege when you’re in it and the fight for equality in situations like these feels like oppression. How does this Kikuyu privilege work, though, if it does indeed exist?

A lot of this is heavily paraphrased from a conversation I had with Mistah Kamenchu and Rarieya Asin. We are all beneficiaries of privilege and victims of oppression. Our minds work really well in remembering the latter.

Suppose Mariga, lover of potatoes, chicken, and chocolate, runs for president. Assume that I run this country like a true African politician. I will have my binders full of Kikuyus in Cabinet, Parastatal Boards, Civil Service posts, the armed forces and any other place that I can stuff them. This number doesn’t look so large, does it? A couple of thousand people only so that could not possibly represent a countrywide problem, or could it?

These my tribesmen, as few as they are, hold influential positions which give their people great advantages in employment, procurement and thus increases the business opportunities for Kikuyus. With the Kikuyu tradition of keeping things “within the house”, they offer more business to other Kikuyus, not only in the Central region but all over Kenya. Kikuyus are big on supporting each other. The figures we are talking about here run into the hundreds of billions. I hope we can now start to realize how hundreds of billions between two tribes eventually distorts the national development agenda if it ever really existed.

These government employees, tenderpreneurs, and graft-money investors will have capital which cannot be matched by other tribes. So, soon you will find Kikuyus owning the fishing fleets in Lake Victoria, coffee plantations in Kiambu and Kisii, Kikuyus owning large hotels at the Coast, restaurants in North Eastern region, large tracts of expensive land in Nairobi in both affluent areas but even more interestingly in slums and many more examples, I am sure you can think of. The money will ensure that sick Kikuyus have their medical bills met, they can afford better food for their houses and will basically flow through the “Kikuyu Economy” Kikuyus will thus be wealthy, simply by association.

Due to the current tribal nature of our voting patterns, we will vote in consecutive Kikuyu or Kalenjin presidents and the effect on the economy will clearly be visible. We will attribute this success in all business fields to our sheer hard work and ethic. The biggest names in the business will be Kikuyu. Kikuyus will be the largest shareholders in Africa’s largest growing bank, Kikuyus will own most of Kenya’s mainstream supermarkets, Kikuyus will be at the echelons of civil society, Kikuyus will be a force to reckon with, owning businesses all over Africa and we will praise them for their resolve and ability to make do with nothing.

You will see Kikuyus all over TV and they will be the successful lawyers, engineers, pilots, business people, media owners etc and it will be attributed to their characteristics as a community, solely. Their region and people will have such disproportionate amounts of money and capital that their success stories will be significantly higher than the national average. When questioned about this, we will say that there are also poor people in Kikuyu areas, which is true but poverty level are relative and the fact that there are poor Kikuyus does negate the fact that more Kikuyus have access to power, money, and privilege than any other tribe in Kenya.

This also extends to corruption. Since my people and I are the majority in government, we are also the beneficiaries of the wanton looting and runaway graft and impunity that plague this nation-state of ours. My regime has endless corruption scandals, keeping with Kenyan standards of over one-third of our national budget. No one will ever get arrested and the money is eventually plowed back into the economy and usually back into our regions and so sleepy town suddenly have malls, hotels, resorts and life appears, in a span of a few years.

Because of proximity our power and government money, the Kikuyu-filled civil service takes home most of the corruption money, allowing them access to this ‘capital source’ that is unavailable to others. Keep Mariga in power for a decade and that changes the look of the Kikuyu middle class. So even though we can’t see it, we have greater access to government money both legally and through alternative monetary outflows.

Being in control of national government policy means that I would push for increased monetary allocation to Kikuyu and Kalenjin areas. Roads and railways are built with the Kikuyu farmer and businessman in mind. Dry ports are created in inexplicable areas with railways leading all the way to my farm and so Kikuyus will have infrastructural advantages over other regions but what other see as a privilege, they see as a norm and thus can’t understand the fuss round it.

Control over government organs means that I also have control through my Cabinet Secretaries on where to direct foreign investment when it comes to Kenya. I control the narrative on where the next Silicone Valley will be to the land which I and my five henchmen acquired and false narratives are peddled until they become truth. Activities associated with the Kikuyu become national priorities. Sugarcane in Nyanza will wither and die away, away from the view, while we will increase government subsidies, research, investment in areas that I feel will be more relevant for me politically

Eventually, the national narrative itself will be strongly infused with Kikuyu culture. There are lots of Kambas writing national history and the stories of the fight for independence will emphasize on the role of the Kikuyu-led Mau Mau, in the fight for independence and slightly touch on the other communities. We will have areas, regions, roads, schools, universities, and buildings named after Mariga Wang’ombe and my entire family and friends even in areas where Kikuyus do not traditionally reside. Nairobi will be full of references to Kikuyu culture, despite being a cosmopolitan city- read The Southern Kikuyu for a bit more information on that. So Kikuyus will benefit from cultural dominance, which has immeasurable economic and social influence in our view of development, regions, and equity.

Being Kikuyu will be something to be proud of because it will represent power and dominance. Uthamaki will be a word everyone will understand and it will come to represent how everyone else views us. Traditional Kikuyu rivals will be subject to ethnic ridicule and state-sponsored marginalization and my government will brutalise them for decades and when they finally do respond to the oppression, I will paint the narrative of them as violent and hooligans and this will desensitize everyone to the inhumanity that I, and subsequent leaders, will put them and subsequent generations, through. Anyone who enjoys a certain amount of privilege just by dint of the ethnic group they were born to -Kikuyu in this case (including the entire GEMA community) comes at a cost to other people.

When a tribal leader leads, his tribe in very real and absolute terms benefits. Marginalised tribes, will seem almost sycophantic in the support of their leader and they will vote him in because of the perceived and real possibility of economic benefit to them and their region, and because of the reality of economic marginalization by successive governments.

So the entire Kikuyu/GEMA community may not have grabbed land, may not have murdered opposition leaders and any other atrocity committed by me but since they were beneficiaries (and still are) of successive regimes that took part in such excesses then that makes them oppressors as a result of the privileges they enjoy.

Kenya is not working for everybody. If it’s working for you then it’s off the backs of other and it is your role to speak out against it. Privilege is hard to see when you’re in it and especially more difficult to hear when you realize that you are a part of it.

This is an oversimplified text in some aspects because there are many social and political aspects that would be in play affecting the success of people from my tribe but privilege is certainly a very big part of it that I cannot run away from. We referred to North Eastern Kenya as the Northern Frontier and based on Sessional Paper number 10 of 1965 and decided to give priority to areas which we deemed were economically beneficial to Kenya. We still treat North Eastern Kenya as less beneficial as other areas and have thus allocated significantly less funding and attention to these areas even in spite of devolution and its aims.

I feel that we need to look at the disproportionate development in this country as a ticking time bomb and be less worried about being offended by an article. Trying to call for patriotism as a way of minimalizing people’s experiences and trying to drum up support for imaginary lines which were created as a way of demarcating ownership of stolen land is lazy and offensive. There is nothing patriotic about silent suffering. Let’s fix Kenya.

NOTE: Opinions are writer’s own and don’t necessarily reflect those of Kenya Insights.

Why Presidential Results Must Be Nullified, IEBC Chairman and CEO Jailed