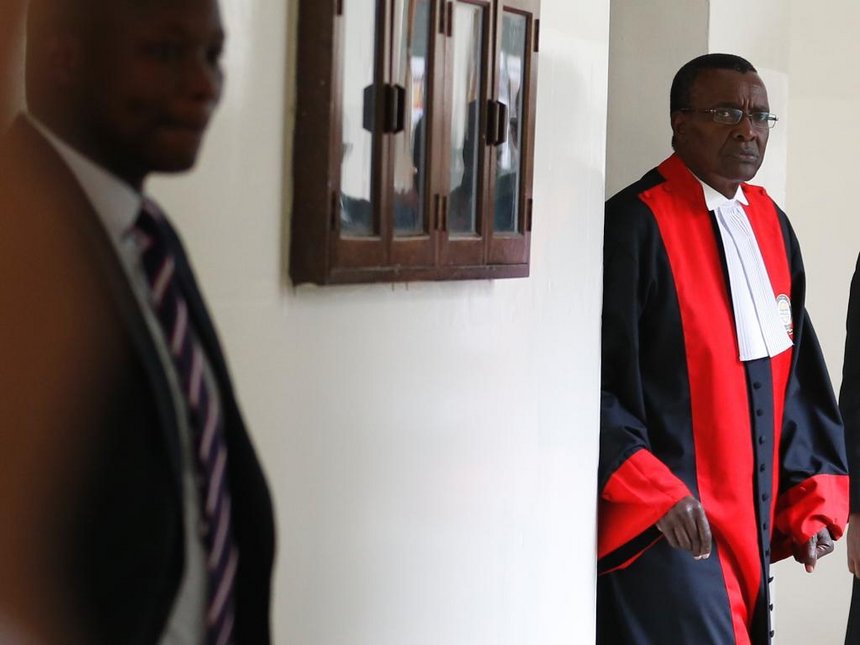 2017 Presidential petition filed in Supreme Court of Kenya by National Super Alliance(NASA) Candidate Rt Hon.Raila Amollo Odinga with his Deputy Kalonzo Musyoka hours to the deadline was unexpected and off guard decision strategically planned for. Filing petition in highest court in the land was not an ‘alternative’ as they used to preach, which means would they use to quench the thirst of the throne if not legal process? but this never made illegally President-Elect Uhuru Kenyatta not to be worried following ever daring opposition.

They knew Opposition brigade meant what they stood for ‘no Supreme Court this time around’ but was hopeful for International support as UN began to caution Mr.Odinga’s move that could have been ‘unconstitutional’.I believed no way could the same Statesman whom a week to Election launched his book entitled “Quest for Nationhood” be the first defiant.Uhuru Kenyatta and his team cocooned themselves waiting for the illegal move by the Opposition NASA and seem never to have thought otherwise, it was a shocker as Opposition filed their case accompanied by 25,000 volume affidavits.

Barely a month to General Elections, on 4th July ICT Manager James Muhati was silently reinstated on duty after being sent off on compulsory leave by IEBC Chairman Wafula Chebukati following his non-compliance during auditing of Servers and KIEMS Database Management System. Salim Lone, Raila’s Chief Adviser raised alarm and thereafter serious suspicions of abnormalities began to crop up in the Commission.The same Muhati was chased away by murdered Msando’s family who they held with the same ICT docket at City Mortuary,’he was never in good terms with Msando’ the family member out of frustration reacted. Msando was a man of integrity and Muhati was not hence his noncompliance with the Auditors.

On Monday 31st, a week to 8/8/2017 Election D-Day, the ICT Director who was Msando Chege was murdered in cold blood alongside a lady Maryanne,21 who just completed her diploma Course in Nutrition and Public Health in Kenya Medical Training College Karen Campus and dumped in a forest in Kiambu.An autopsy showed Msando was strangled to death after being tortured, an exercise that was aimed for him to release vital information in regards Servers and KIEMS Kits to enable rigging.Prior to results announcement, the query was who could benefit from his murder and now the question is who benefited? The answer is in the public domain.

Concurrently to this murder case, Presidential Ballot Papers a procurement that was awarded to controversial Dubai based firm Al Ghuriar were airlifted with 6.5%(980,000) Extra ballot papers contrary to 1.5%(196,000) that was planned for, that’s 20,818,000.Up to date, the extra ballot papers have not been accounted for.These concerns were raised by Thirdway Alliance Presidential Candidate Ekuru Aukot, IEBC confirmed in a tweet that all his allegations were untrue and unwanted but a day later after intense pressure, they admitted truly there were excess extra ballot papers that will be accounted for.After collation of all Rejected votes piled up to over 400,000, i wonder what was the purpose of these millions of Presidential Extra ballot papers if they to reduce the number of rejected/spoilt votes.

In court during the just concluded petition hearings on Tuesday 29th, all the Respondents; all two IEBC Lawyers and Uhuru Kenyatta Lawyer Fred Ngatia couldn’t explain a simple exercise of how Stray ballot papers were accounted for.

In court during the just concluded petition hearings on Tuesday 29th, all the Respondents; all two IEBC Lawyers and Uhuru Kenyatta Lawyer Fred Ngatia couldn’t explain a simple exercise of how Stray ballot papers were accounted for. Again many were shocked that all along IEBC Servers were operating from Europe, France yet on public domain IEBC reported they had contracted Telkom Kenya to manage its servers from which tallying will take place before results are made available to the public.

“The process was free, fair and peaceful” -a narrative all International Observers admitted but could it be verifiable? The allegation of rigging could not be watered down through talking,it was a matter that concerned the KIEMS Kits and Database management System and Servers hence the only solution to confirm verifiability of this process was access to be granted by the authority/Court to scrutinise system and Original Forms 34C (For IEBC Chairman Chebukati at National Tallying Centre) that was an aggregate of Forms 34B(From Constituency Tallying Centre)and which was an aggregate to Form 34A(From Poling Stations). Access was granted and there was almost 70% non-compliance with a court order issued by Supreme Court Judge David Maraga. Only Court Registrar was authorized to file an Audit report to court for hearing and below were the results of the defied Orders:

Related Content:  Why JSC Blocked Out Makau Mutua From The CJ Race And Why The Next Chief Justice Is Not Going To Be A Kikuyu

1.Order B-Firewalls without disclosure of the software version.

2.ORDER H-Certified copies of Certificates of Penetration Tests Conducted on the IEBC Election Technology System used prior to and after General and Presidential elections.

Response-Documents submitted were not Certified as they don’t conform to Election(Technology) Regulation 10,2017

3.ORDER I-Specific GPRS location of KIEMS Kits used during the Presidential elections period between and including 5th August and 11th August 2017.

Response-IEBC provided the GPS Location of the polling station and not KIEMS kits.

4.ORDER M-Log in trail of users and equipment into IEBC servers

Response-IEBC was to provide Read on Access meaning they should demonstrate that logins come from IEBC servers and copy or alternatively access the information in presence of the Petitioner and provide the copies as and when requested.Only live access was provided between 27th August at 3:50 pm without the ability to access the logs or even view them hence Access was not Granted.

Above were the most vital and areas of authenticity for results announced by Commission Chairman Wafula Chebukati.It was evident during the court hearings, both the Respondents IEBC and Uhuru Kenyatta Lawyers argued on basis technical allegations by the Petitioner to be ignored because that’s where verifiability could conduct.The decision by IEBC Senior Counsel Paul Muite admitted to the Court his client was ready to offer room for scrutiny of its system and forms seemed to be a personal decision as Uhuru’s lawyers Fred Ngatia and Ahmednassir Abdullahi opposed his submission on spot yet they were for the same goal.What was being hidden in the system that could intimidate their client Uhuru Kenyatta? Fraud.

IEBC Couldn’t explain to the court what exactly were streaming in in the Public portal as they at some point refer to them as ‘Statistics’,’Provisional results’.Court of Appeal ruling had it, results were only supported to submitted and tallied electronically and only voting was to be manual.IEBC were tongues tied as they submitted tallying and transmission was manual by use of forms 34A,34B contrary to the law.

IEBC officials seem to have vowed rather be locked up in jail than allow this anonymous fraud to be exposed.All acts above are justifiable for locking up these two officials and Presidential elections getting overturned for a Run-off.That’s the only way sovereignty of the voters will be acknowledged.

Supreme Judgement, The Absence Of Justice Ibrahim Mohamed Changes Everything

The American Hand In Kenya’s Election