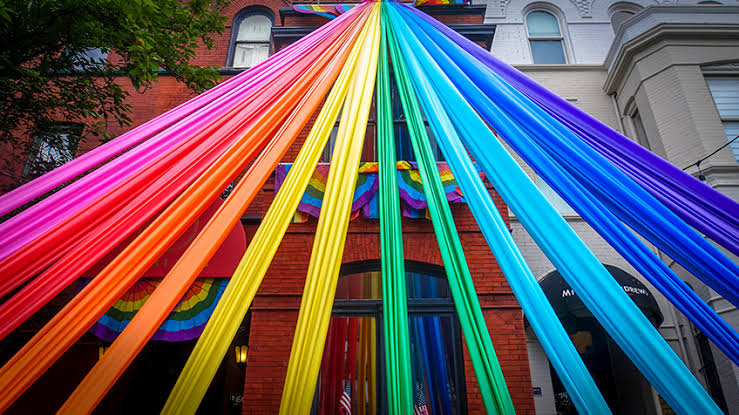 There is no hereditary associated lesbianism or Sexually Transmitted or Congenital Homosexuality. Nobody is born a Lesbian. However much it is precisely considered immoral, ignominious and uncalled for behaviour in the society and as the word of God from the holy bible dismisses it, we must not prove our ignorance by snubbing this discussion to find out and deal with the foundation of this phenomenon, what’s actually catalysing this act despite it being outlawed and immoral. Even Satan wasn’t gay, he had to approach naked EVE instead of naked ADAM. And even if Satan was a Woman, he would have approached Adam not Eve.

Lesbianism to me is a Psychological disorder/ distress product and Physiological product and scholars, researchers, LGBTQ can attest to that. The fear and denial of having a social platform engagement even in the local media stations to ascertain the root cause of this outbreak is worsening the situation.

The Church is hypocritical about this matter when there are tremendous cases of Sodomy and Lesbianism even among men of God, and Nuns. The Church doesn’t want to come into terms with Genesis of this menace, so they speak.

Scientists and researchers got a bird’s eye-view of a great number of homosexual women and peroriated that lesbianism can be enkindled, fons et origo by various physiological and psychological ingredients. They still conjecture, cogitate that homosexuality is a psychological disorder, triggered by misunderstanding, Dysfunctional family atmosphere – failed parenthood, Gender based violence, Inferiority and Social vulnerability. Read on to find out a lot of interesting things about women and understand why they become lesbians.

Negative family environment is often the main reason for many psychological disorders, because during the pre-adolescent and adolescent periods, family issues and a lack of contact between parents and children exert a big negative influence on the child’s personality development.

Related Content:  Julie Gichuru You're Not Part Of The Solution But The Problem Not A Peace Ambassador But Impunity Queen

Psychologists state that the latent tendency towards lesbianism is embedded in the subconscious mind of every girl. The life path and sexual orientation the girl will sooner or later choose, depends mostly on the process of upbringing and the role of parents in her life. During the transformation from a girl to a woman, every girl faces a great number of questions and inner contradictions that create her identity. If she doesn’t find correct answers to these important questions and parents can’t get their daughter in the right frame of mind, the girl starts living according to her own beliefs, rules and values.

It’s wonderful when the emotional connection between a mother and a daughter is profound and strong enough. Lack of maternal warmth and support make daughters open their hearts to female friends. There’s a high probability that close association and trust-based relationship between the daughters of unloving mothers can turn into lesbianism one day.

The daughter of unloving parents is often a person whose heart is covered with emotional scars that make her adulthood painful, difficult and problematic due to the strong influence of emotional insecurities that tie her hands and make her unable to change the situation for the better. Modest and diffident girls are often chronic outsiders, because they find it difficult to uphold their rights and opinions.

Modern society is full of confident and impudent people who make weak personalities take a back seat all the time. As a result, these weak ladies narrow the circle of their contacts and prefer to communicate and keep contact with like-minded female friends who often turn into lovers. Unfortunately, sometimes even good-breeding can play a low-down trick with girls and steal their confidence. Ladies who refuse to hang out with male friends are often doomed to loneliness and possible lesbianism.

Related Content:  David Matsanga On Why He Supports Uhuru’s War On Corruption

Women with high levels of testosterone in their blood are more likely to become lesbians.

Life of a plain girl is difficult, because this, at first glance, warm-hearted and empathetic society isn’t as kind as it may seem. There are a lot of beautiful and attractive ladies which embarrass plain girls and hit where it hurts by pointing out their flaws.

Naturally beautiful girls usually choose heterosexuality since they’re always surrounded by guys who boost their self-confidence and significance, giving compliments, flowers and bestowing smiles upon them.

Plain girls often turn into tomboys, because they’re deprived of compliments and attention. Their tomboy habits, behaviors and social pressure gradually kill their desire to build traditional heterosexual relationships, because they think that they’re not beautiful enough.

Over the years, this problem turns into a deep-seated inferiority. If nothing changes for the better and a tomboy fails to raise her self-esteem, then she becomes either a lesbian or a woman who leads depressing, lonely and incomplete life.

Modern generation’s – Lamba lolo generation’s – Wamlambez generation’s life motto is, “YOLO- You Only Live Once so Live your life to the fullest and try everything while you’re young, beautiful and healthy.”As a result, many girls try everything and lesbianism is no exception. Even women who have a heterosexual relationship sometimes show interest in lesbian sex.

Often young ladies say that one-time experiment with lesbian sex isn’t a sign of lesbianism, but just a thrilling experience. The statistics show that such experiments usually alter women’s views on life and lead to homosexuality.

Relationship between a man and a woman is a constant confrontation that consists of grudges, tears and fights, albeit it’s not a main reason why women join a man-hating club and become lesbians.

Hatred towards men and subsequent lesbianism can be stimulated by some kind of emotional or sexual abuse and leave deep scars in the subconscious mind of young ladies. If they don’t receive help from parents or psychologists, they have trouble overcoming the fear of men. Over the years, deep-seated fears, wounds and inner conflicts can only intensify the problem and give birth to an unbelievably intense disgust and hatred towards men.

Moreover, much depends on a role and reputation of a father in the family. If the father looks like a loser and a moral moron in the eyes of his daughter, then she loses respect for men and starts thinking that a relationship with a man is a bad idea.

Toxic feminism is also a major blow and a champion for this temperament. “Girls/ Women understand each other better” “Men misuse women and dump”