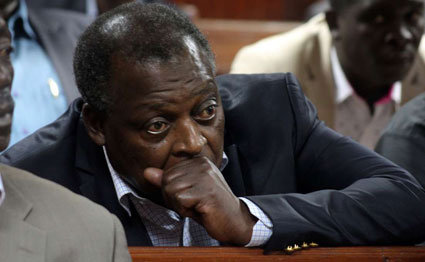 Authorities in South Sudan have suddenly agreed to pay a company associated with the former Lugari Mp Cyrus Jirongo Sh4.9 billion after a case was heard and determined in Arusha, Tanzania.

The company associated with the controversial politician was hired to construct South Sudan People’s Liberation Army but the debt had delayed for over ten years.

The works to build Dr John Garang Memorial Military Academy, 4 warehouses and fuel depots kicked off in 2007 and were completed in 2011 with a pending debt of US$18.6 million but the interests have since accumulated to US$49.3 million (Sh4.9billion).

A Chinese firm Yu Sung Construction Limited was also part of the team that had dragged the government of South Sudan to the Arusha based court in November 2019 to pay the decade long debt.

“We have a pleasure to kindly request your honorable court to file a consent order of the payment of US $49,398,473.91 in four installments,” read part of the demand.

But SPLA terminated the contract with Yu Sung in September 2011, just two months after South Sudan became a nation when the debt still stood at USD 18,609,595 after attracting an interest of USD2,791,439 per annum.

Lead lawyers were persuading presiding Justice Munica Mugeyi who issued conservatory orders to freeze and settle the debt where money would be put in a winning account until the case is determined.

Related Content:  Jacque Maribe Could Be Charged With Murder And Face Life Sentence

This was after South Sudan changed the construction sites claiming that locals had staged demos to protest the works.

“The SPLA authorities chose Kurmork, which unfortunately proved to be prone to flooding after foundations had been laid and some buildings already at an advanced stage, according to the submission.

“The project owners chose a third site in Mangalla country near Juba-Bor Highway which also came to be prone to flooding of the Nile and the project was moved to Suleng, 75 kilometres away in the northeast of the capital Juba”.

A meeting chaired by Brig General Abuol Deng and Brig Gen James Hakim Elia held in 2011 wanted the contract to be reviewed but the idea was later rubbished and Yu Sung while South Sudan still owed them more than US$ 18 million.

By September 2020 debt had accumulated to over US$49.3 million by and the South Sudan government acknowledged the fact that the ministry of Defence and Veterans Affairs entered into contracts with Yu Sung on different dates for construction of facilities, which were later defaulted.

“Recognising the fact that the failure and default of the respondent to uphold the contractual obligations it signed with the applicant may complicate the matter much more should the court’s proceedings be the only option left to the parties to follow,” Athian Ding Athian wrote.

Mr. Athian who is the minister for Finance and Planning of South Sudan made the commitment on the payment to Jirongo in a letter dated 26 November 2020.

Many senior military officials from South Sudan steal from government and hide their loots in Kenya which has become their safe haven.

Related Content:  Telkom Kenya CEO Mugo Kibati On The Spot Over Sh2B Scandal With The Government
Kenya Insights allows guest blogging, if you want to be published on Kenya’s most authoritative and accurate blog, have an expose, news TIPS, story angles, human interest stories, drop us an email on tips.kenyainsights@gmail.com or via Telegram
Related Topics:Cyrus JirongoSouth Sudan army generalsSouth Sudan looting
Up Next