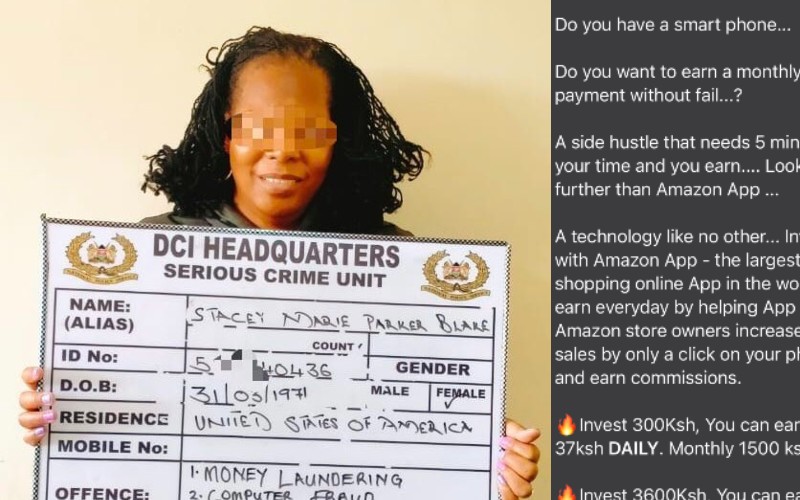 A woman suspected of obtaining millions of shillings from Kenyans in a fraudulent scheme known as Amazon Web Worker was on Friday, May 28 arrested.

Stacey Marie Parker, 50, was arrested by DCI detectives at the Jomo Kenyatta International Airport (JKIA), after jetting into the country from the United States (US).

The Directorate of Criminal Investigations (DCI) says that Parker’s arrest follows an intensive investigations by serious crimes detectives that linked her to the Ponzi scheme that has duped unsuspecting investors millions of shillings.

A suspect believed to have obtained millions of shillings from Kenyans in a fraudulent scheme known as Amazon Web Worker, was arrested yesterday after she jetted into the country, from the U.S. pic.twitter.com/XN2SXnm7l8

In a well-coordinated and orchestrated scheme, investors were duped into investing their money in an online app known as Amazon Web Worker, on the premise that they would earn huge profits of up to 38% for a deposit lasting only seven days.

Social media platforms were awash with advertisements wooing Kenyans to the mouthwatering scheme, that promised to double one’s deposits in a month. In one such advertisement, investors who deposited KSh100,000 were promised KSh351,000 after 30 days!

All one needed for his/her application to be successful was to register their personal details such as full names, M-Pesa account details and mobile phone numbers in the online app.

“Unsuspecting Kenyans downloaded the app in their hundreds, registered and made their deposits. Some referred their spouses, children and close friends to the scheme, in a bid to make a fortune overnight. It is not until when the app was deleted from the internet without prior notice, that the investors discovered they had been duped.

Related Content:  How FBI And DCI Tracked The Source Of Ruto’s Fake Assassination Letter To A Cyber Cafe In Karen And Linked It To Dennis Itumbi

“They were shocked to learn that the app was not in any way linked to Amazon, a multinational technology company based in the United States,” says the DCI.

App went down with millions of shillings of Kenyans

The app allegedly went down with deposits worth hundreds of millions of shillings from gullible investors, who had hoped to hit the jackpot, once their deposits earned profits.

Some of the duped investors reported the matter to DCI headquarters to seek assistance. Detectives swung into action immediately.

“Detectives managed to link Stacey to the syndicate after painstaking investigations revealed that she had pay-bill accounts in her name, that had a balance of KSh50 Million, believed to be deposits made by the unsuspecting victims,” adds the DCI.

The sleuths are currently pursuing other suspects in the fraud syndicate.

Parker is in police custody pending arraignment in court. She will be charged with money laundering, computer fraud among other charges.