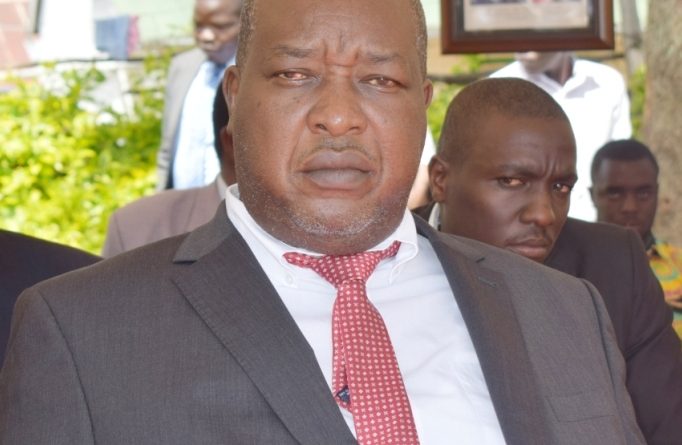 Business at the Nyamira County headquarters came to a stand still after Governor Amos Nyaribo released the names of staff members who were promoted through dubious means. The governor who was flanked by members of his kitchen cabinet exposed over 1,000 employees, mostly women, who were promoted after paying bribes or engaging in sexual relationships with top officials who worked with the late governor John Nyangarama.

Nyaribo demoted all the staffers who benefited from the illegal and irregular promotions as his administration resorts to recovering all the money they earned through the illegal promotions. The recovery is set to start from the August salaries which will affect employees from all the 10 departments in Nyamira County.

An audit report presented to the CECMs by the governor shows that all the illegal promotions were hurriedly done through computers and that there was no evidence of the relevant departments awarding the job grades to the affected workers.

The report also revealed that most of the staff members earned higher grades without going through the requisite procedures as stipulated by the Kenya Human Resources Policies and Procedures Manual for the Public Service 2016.

Governor Nyaribo told the  demoted employees to move to court if they were not satisfied with the verdict as he vowed not reverse the decision even if it means being voted out in August 2022 general election.

Affected employees have, however, dismissed the demotions and plans to recover the money as they vow to challenge the decision by the governor in court after the county public service board also disowned the promotions it effected. Nyaribo was supported by a section of the MCAs led by Bomwagamo MCA Charles Barongo who gave the move a thumps up.

Kenya Insights allows guest blogging, if you want to be published on Kenya’s most authoritative and accurate blog, have an expose, news TIPS, story angles, human interest stories, drop us an email on [email protected] or via Telegram
Related Topics:illegal promotionsNyamira countyNyamira Governor Amos Nyaribo
Up Next