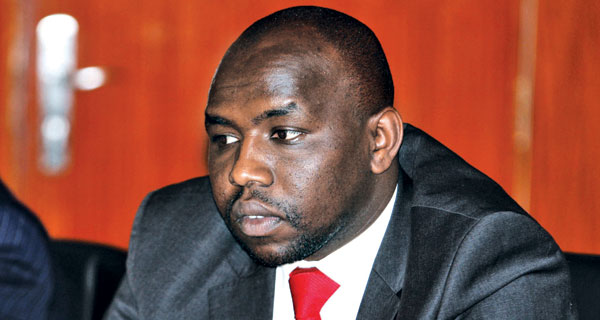 By Nicholas Olambo
Elgeyo Marakwet Senator stormed a meeting he did not organize in his country. The meeting was organized by the County Government of Governor Alex Toglos and the local churches. As is the ‘norm’ these days political rallies are organized as prayer meetings, one wonders when prayers or crusades became the business of politicians.
Murkomen stormed into one that he did not organize and received scathing attacks for his sycophantic politics at the cost of serving the locals. Accompanied by Mps William Kisang and Jackson Kiptanui, The Senator was received by speeches for from angry residents who accused him of not using his influential position in government to end insecurity in Kerio Valley.
Governor Alex Toglos and Former IG David Kimaiyo who is eyeing Murkomen’s seat had earlier led thousands of residents from all the four sub counties to protest against the runaway crime. The leaders and hundreds of the protesters later travelled in buses to the ‘prayer rally’.

Governor Alex Toglos and Former IG David Kimaiyo who is eyeing Murkomen’s seat had earlier led thousands of residents from all the four sub counties to protest against the runaway crime. The leaders and hundreds of the protesters later travelled in buses to the ‘prayer rally’.

Murkomen interrupted the meeting and tried to urge people to be a little patient as the Interior CS Joseph Nkaiserry and IG Joseph Boinet would visit the area on October 14th. No one had time to listen to a sycophant senator who was accused of ‘eating the meat’ and left his people to enjoy the scent. He was threatened that the area would rather support the opposition if the government doesn’t end the crimes swiftly.

‘We would rather suffer in the opposition other than in government’ said Endo MCA Kirop Festus. The county governor Alex Toglos appealed to CS Nkaiserry to resolve insecurity as expeditiously as he ordered him [governor] to record statement over Moi University VC appointment remarks. Toglos was part of the tribal cocoons that protested against the appointment of Prof Laban Ayiro as the acting VC of Moi University. They referred to the professor as an ‘outsider’ heading ‘their’ institution.

But who knew the mouth running Murkomen was this dwarf at home? Murkomen is a giant sycophant to the DP William Ruto who supports every non-sense to fill his stomach. Alongside his National Assembly counterpart, Aden Duale, Murkomen was accused of having benefited from the infamous shs 791 NYS scandal. The ‘Mr. Know it all’ senator is losing the ground to former IG David Kimaiyo and KI can authoritatively say that Murkomen is under siege.

Kenya Insights allows guest blogging, if you want to be published on Kenya’s most authoritative and accurate blog, have an expose, news TIPS, story angles, human interest stories, drop us an email on [email protected] or via Telegram
Related Topics:Nicholas OlamboOpinionPolitics
Up Next

This Man Governor Joho And The Rich Muslim Voting Block , What Worries Statehouse Most