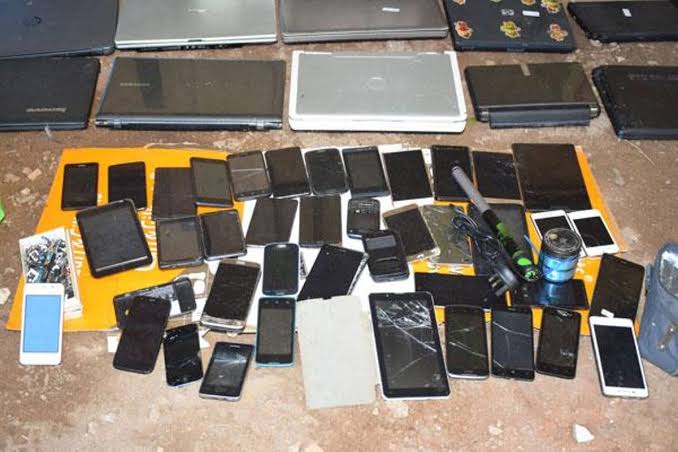 The DCI has stated that they are now  targeting civilians who buy electronics from unauthorized vendors who mainly deal with quick sell of contrabands and stolen properties.
In a statement on yester evening, the Directorate of Criminal Investigations warned Kenyans against purchasing laptops, mobile phones and TV sets from traders who lack requisite trade documents, including licenses, permits and other local and national approvals.
According to DCI, the stolen electronic gadgets get rebranded and repackaged using polythene bags before reselling them as new devices.

In August, police officers in Nairobi recovered 254 laptops believed to have been stolen from a house in Kilimani, Nairobi.

Last week, a local company published in the dailies serial numbers of more than 1000 laptops it claimed had been stolen from the Inland Container Depot (ICD) in Nairobi, urging Kenyans not to buy the said gadgets.

According to the DCI, traders without proper premises usually buy the devices from ‘‘armed gangsters who have violently robbed innocent citizens’’ and maimed or killed them.

It’s risky and dangerous to buy any electronic device from suspicious outlets,’’ DCI said in statement on Twitter.

According to DCI, stoneheaded Kenyans who defy these orders will face serious consequences.

‘‘Being found with suspected stolen property, you suffer immediate consequences of the actual criminal, which may escalate to a death sentence,’’ the DCI warned in the strong statement.

‘‘When [we] investigate (forensically) and find you in possession of such said devices, by the time it is established that you were not involved in the crime, you may have suffered immensely,’’ the statement said.

Take for instance, in August last year, detectives discovered in Nairobi a cache of 700 laptops that were reportedly stolen from the Office of the Deputy President William Ruto. Seven suspects were arrested in the dawn raid.

The laptops, valued at Sh320 million, had fraudulently been obtained from businessman Stephen Musyoka.

Kenya Insights allows guest blogging, if you want to be published on Kenya’s most authoritative and accurate blog, have an expose, news TIPS, story angles, human interest stories, drop us an email on [email protected] or via Telegram
Related Topics:DCILaptopPhonesSecondhandThugs
Up Next

Counties Are Spending Less On Development From The Total Allocation

SGR Suspends The Food Onboard Directive