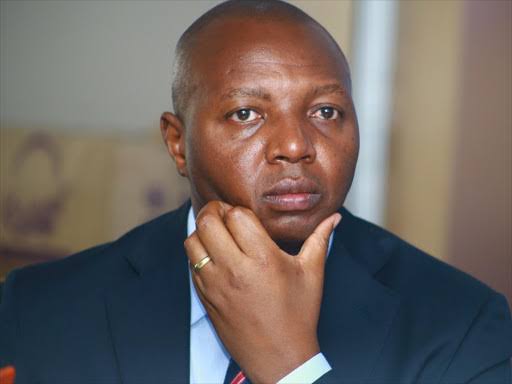 DP Ruto’s ally and KPA MD Daniel Manduku whose phone remains switched off most of the time is a panicked man who knows his days are numbered as DCI hands over three investigations files to ODPP.

Embattled Daniel Manduku reported to the office over a year and four months ago as Acting Managing Director. For the few months he has been at the top, Manduku has engaged in massive fraud and impunity, just like his buddy—number two.

DCI handed over three files that covered a probe report about the Makongeni Goodshed Project, Construction of concrete barriers and the revitalization of the Kisumu port that the President is set to launch.

“The file was handed over to me yesterday…we are looking at it and if satisfied as ODPP we will proceed,” DPP Noordin Haji told said.

Embattled KPA Managing Director Daniel Manduku is at the centre of all the investigations. The soft-spoken cartel who is now facing over 30 lawsuits of corruption and abuse of offices is alleged to have authorised irregular expenditure amounting to Sh2.7 Billion for the three projects. Why is he a free man in the first place when everything has been laid out that he’s a competent looter?

According to DCI’s report, Manduku masterminded alongside the said officials the division of 2100 square meters yard belonging to Kenya Railways into 9 zones and fraudulently awarded 8 contractors the concrete works that costed the taxpayer Sh506 million.

DCI probe also revealed that all 8 companies, believe to be runned by Manduku and cronies, were paid in full without completing tender. Also, the sleuths note that no job was done on the ground as Kenya Railways reclaimed its land and demolished the few concrete they had laid to bluff the public.

The KPA management whose arrests warrants might soon if not already by now has, in their rebuttal, rubbished DCI’s investigations stating that no land was reclaimed and they gazetted the acquisition of the property from Kenya Railways.

A few days ago, Manduku and Former KPA MD Catherine Mturi-Wairi banks accounts were frozen after requests by the office of DPP Noordin Haji. This is after suspicious monies were traced to their accounts.

Manduku, who is DP Ruto’s proxy has been attempting to bribe detectives to go slow on him but as it has to be, the fall of everyone linked to DP Ruto is inevitable.

A few weeks ago, the arrogant KPA boss told a journalist to write what they wished after the journalist sought for comment about some scams at the scandal-ridden authority. Now, the trembling Manduku is begging media not to expose the scams further after he felt the heat and stupidity of his reckless remarks.

Kenya Insights allows guest blogging, if you want to be published on Kenya’s most authoritative and accurate blog, have an expose, news TIPS, story angles, human interest stories, drop us an email on [email protected] or via Telegram
Related Content:  Authority Find Crown Paints Guilty Of Unethical Marketing, Price Fixing With Cartel Like Tendencies
Related Topics:Dan MandukuDCIDP RutoKPAodpp
Up Next